Even This Cuddly Teabagger Dude Might Vote For Hillary, So He Can Keep His Beloved Obamacare 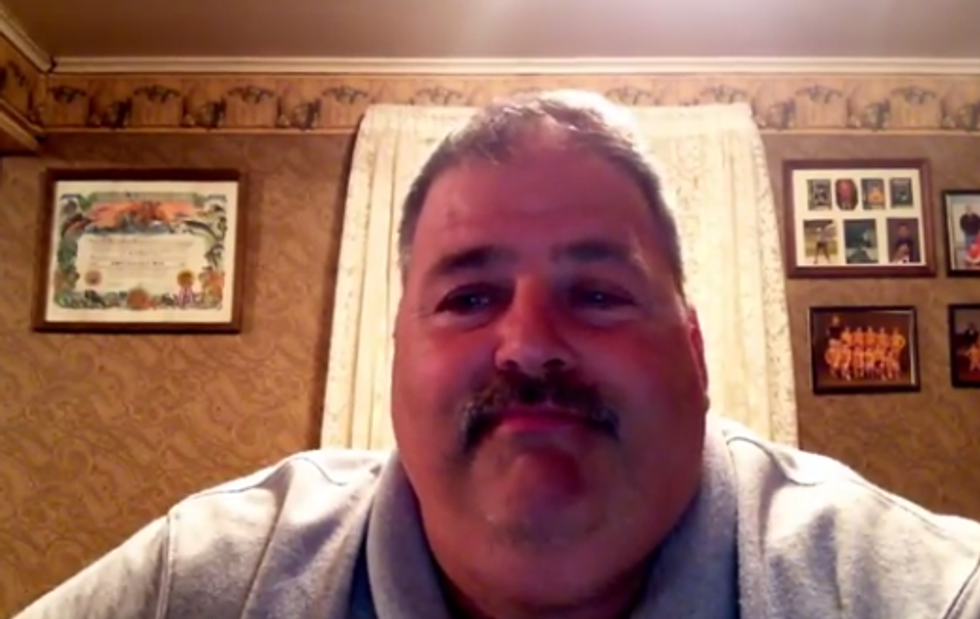 Tyrant Obama sure did set a mighty fine trap for the Republican Party, with their constant efforts to repeal Obamacare! With the full benefits of the Affordable Care Act starting to come to fruition in 2014, and even more this year, people around the country -- even those who don tri-cornered hats and hold Gadsden Flags at Koch Bros.-funded tea party rallies -- are starting to realize, well, goddamn, look at my general healthcare situation getting better! Rep. Cathy McMorris Rodgers learned this the hard way when her FaceSpace call for "Obamacare horror stories" was met with a whole lot of "my healthcare is cheaper!" and "my grandmother didn't die!" and "these are my slut pills now!"

Exhibit A:  THIS GUY. His name is James Webb (not to be confused with Jim Webb), he is 51 years old, and he has a tea party/gun-themed YouTube channel called "Hot Lead retired." In a video posted Tuesday (NOT April Fools' Day, we checked), Webb, a self-described "charter member" of his local chapter of the Tea Party Patriots, says that he's facing a tough decision in the upcoming election, and he just may have to abandon his 32 years of Republican voting, because said Republicans want to take away the healthcare that has literally changed his life, for the better. (THANKS OBAMA.)

"If it wasn't for Obama, and that Obamacare," he says, "I would still be working." He explains that he has some serious health problems that would, under the old system, make healthcare extraordinarily expensive for him. However, instead of having to work up until Medicare kicked in, he was able to retire without worrying whether or not he'd be able to pay for his medical care. (THANKS OBAMA AGAIN.)

Not only are his healthcare needs taken care of, but evil, tyrannical socialist Obamacare is NOT death-paneling him! It is in actuality reimbursing him for a gym membership, so he can actually get healthier! (THANKS ... oh you get the idea.)

So, James Webb is looking back and going HUH, those Republicans haven't done jackshit for me over the last 20 years, have they? Nope, Mr. Webb, we're pretty sure they have not. Webb ends his video by saying that, unless Republicans change (they will not), he's probably going to have to "swing [his] vote over to Hillary." Yeah! Webb also has ANOTHER Obamacare video, from a few weeks back, where he explains what his coverage is really like. Survey says: Pretty great! So we are mostly sure this one's not a prank.

To put this in a little bit of perspective, a perusal of the rest of Webb's YouTube channel is in order, where we find videos about guns, guns, guns, homosexuals, and also guns. In one video, Webb declares to the world that he is not going to be able to watch that Walking Dead program anymore, due to all the gay kissing, and in another one, he complains that even his damn COFFEE is gay now, and "this madness has to stop!" He just says thank God there's no Starbucks around his neck o' the woods, because there's too much "faggot crap" on the coffee you get there, like rainbow-colored sprinkles and shit. Why won't coffee stop putting gay culture in our face and in our mouth?!

Shit, y'all, you need to watch the one about fag sprinkles too, it's hi-larious, as long as you're not an oversensitive and boring libtard:

We are glad that Mr. James Webb is not afraid to say what he thinks. He's wrong about most things -- Starbucks is not making you gay, they are making you coffee -- but he's right about Obamacare. And we are glad that he has healthcare and it's making his life easier! Maybe he can talk to his teabagger buds and say, "Hey there, all of my pals! What if our tantrums over the past few years were over nothing?" and his friends can say "Uh, James? Preznit's still a negro, if'n ya hadn't noticed." But James knows that, and he downright acknowledges that said black president has made his life a hell of a lot better.

Them gays, though, fuck them and their GODDAMN sprinkles! Be nice in the comments, or don't, whatever.