Even When He Is Talking About Jesus, Ted Cruz Just Can't Tell The Truth 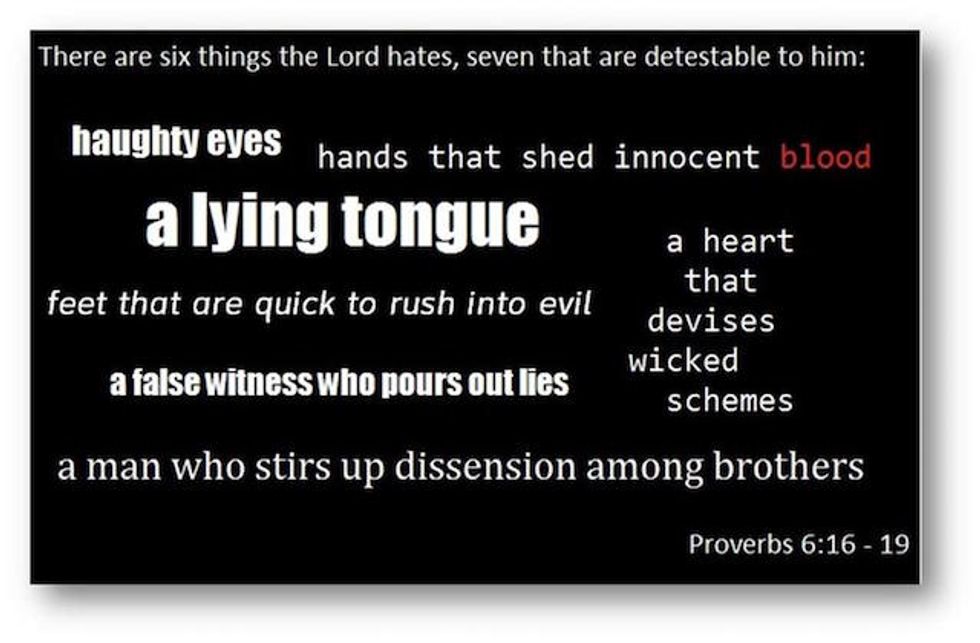 this section must not be in ted's bible

Ted Cruz -- he of the most punchable face in Christendom and everywhere else -- decided to get up in front of God and everyone else on Monday and lie his weak-chinned little face off. We realize that this is a statement that inspires the same surprise as noting that a day ends in -y, but still. So what, exactly, did Punchy-face say that simply reconfirms he has not even the barest of nodding acquaintance with the truth? Oh, just the usual stuff about how heathens are literally hunting down The Youth and imprisoning them for even thinking about praying or something like that.

During a town hall event in South Carolina on Monday, Republican presidential candidate Ted Cruz made the bold claim that he will defend religious liberty because “what kind of country are we living in where…we’re threatening teenage girls with going to jail if they say the name of Jesus?”

Gonna hazard a guess here and say "no kind of country except the country that exists only in Ted Cruz's fevered imaginings" because we do not actually jail people for praying. (Well, unless they're Muslims, in which case a startlingly large percentage of the population might get on board. Ugh. Now we're depressed.)

Cruz made the remark after telling the story of Angela Hildenbrand, a high school valedictorian who he claims was “threatened with jail if she exercised her right to pray during her graduation speech.” [...] [Cruz said] Hildenbrand was initially barred from leading prayer, but attorneys from the Liberty Institute filed an emergency motion and won an appeal shortly before her graduation.

That story sounds riveting! And also pretty much completely untrue! Probably because it is!

See, the whole thing is Texas's fault, thanks to having an unusually persistent strain of Christianity that requires one pray in public all the goddamn time, including at high school graduations. Some parents got kinda sad about that because they are under the misguided belief that we are not a nation held hostage by theocrat nitwits, and they sued. Initially, the court found for the Jesus-haters, issuing an injunction against the district and the state saying students could still talk all they wanted about the Holy Ghost or whatever, but they couldn't full-on pray. So that must be when Christian Warrior Hero Angela Hildenbrand was threatened with being thrown in the hoosegow, right? Um nope.

[Greg Lipper, who worked on the case] said “There was no threat of any student getting punished by the court, let alone getting sent to jail.”

So weird how Ted Cruz would turn a thing that is part of every preliminary injunction against government officials ever -- "don't do this or you will be in trouble" -- into THEY ARE JAILING TEENAGE GIRLS FOR PRAYING DEAR LORD HELP ME NOW.

Oh, wait. We have not told you the best part of this story about Christian Princess Angela Hildenbrand.

In fact, Hildenbrand was not even named in the lawsuit at the time of the injunction — she intervened and added her name as a defendant during the appeals process.

So let's break this down. Christian Martyr Angela was not the target of the lawsuit. Instead, people sued a school district over turning graduation into a Prayer Fun Time Jamboree. The school district lost initially and was told that they needed to behave. Only after that did Blessed Angela enter the picture, voluntarily intervening and making herself a defendant. Ultimately, the divinely inspired types prevailed upon appeal, and Saint Angela of Arc led the crowd in prayer, just like she always dreamed of. That does not sound at all like anyone is going to jail, but maybe that's just us.

Far be it from us to try to remind Bible-Humper-Thumpers how to go about doing their Bible-ing and their praying and worshiping and all the other gerunds that are required to be an ostentatious evangelical Christian, but we are pretty certain that you cannot lie, because that makes Baby Jesus very sad. He's crying real tears now, and it is all Ted Cruz's fault.