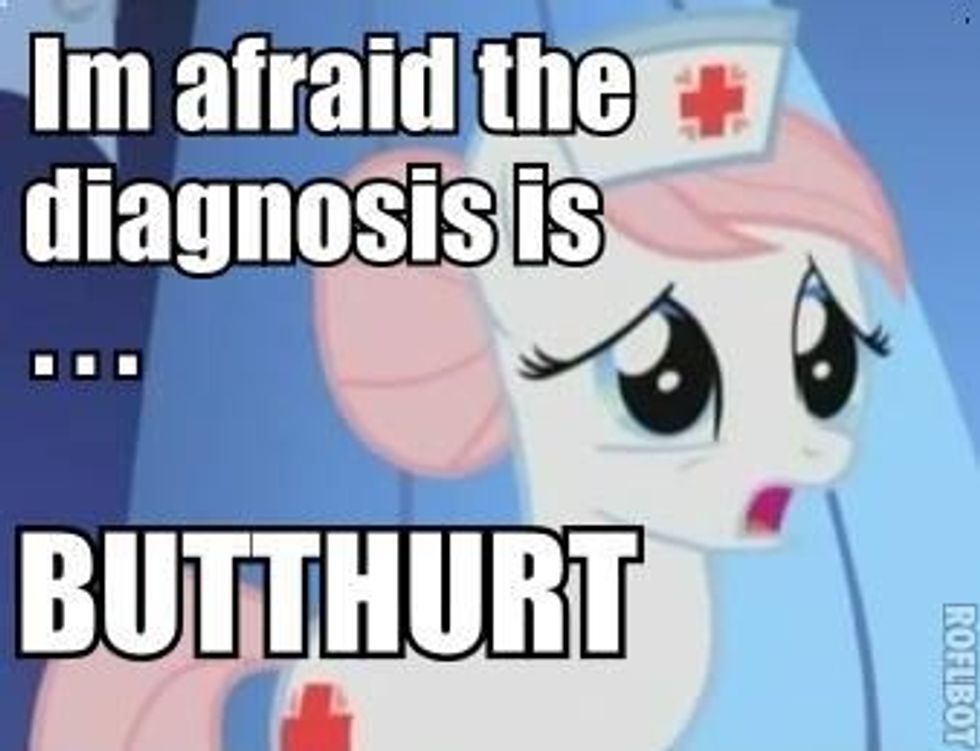 The highest court of unelected activist judges in the whole Us of America declared, for the second time, that Obamacare haters need to hush now and take a nap because that shit is kosher, yo. Which does not mean the Republican Party or any of its "presidential" "candidates" are going to do that. The Affordable Care Act may be the super-duper twice-certified constitutional law of the land, but that doesn't mean it shouldn't be repealed and replaced with something even MORE better, dunno what yet, that's not what matters right now!

Today’s ruling makes it clear that if we want to fix our broken healthcare system, then we will need to elect a Republican president with proven ideas and real solutions that will help American families. Hillary Clinton supports big government mandates and expanding the government’s reach into our healthcare system, maneuvers that have made our healthcare system worse off. What you will not hear from Democrats today is any information on how to make healthcare more affordable at a time when premiums are getting more expensive.

Yes, that's the party's official plan -- to rid the nation of its current healthcare system and replace it with "a Republican president." Priebus is A Idiot, though, and besides he's all stressed out at the moment, trying to figure out how to keep even bigger A Idiot Donald Trump -- now in second place!!! in the GOP primary polls, HAHAHAHAHAHAHAHA -- out of the Republican debates so he does not make the party look dumb. Er, that is.

So what do our current options for Republican president have to say about the Affordable Care Act and how they will kill it dead and replace it a plan that will save even more billions of dollars and thousands of lives?

As President of the United States, I would make fixing our broken health care system one of my top priorities. I will work with Congress to repeal and replace this flawed law with conservative reforms that empower consumers with more choices and control over their health care decisions.

Here is what I believe: We need to put patients in charge of their own decisions and health care reform should actually lower costs. Entrepreneurs should be freed to lower costs and improve access to care – just like American ingenuity does in other sectors of the economy.

That sounds great, Jeb, but how does it work? You know, with the details and the math and the laws and all those tricky technicalities? Do you have a "Even Better Than Obamacare!" plan on your website for us to read? No? OK, then, you get back to us on that.

Lindsey Graham, what is your plan?

Today’s decision only reinforces why we need a president who will bring about real reform that repeals Obamacare and replaces it with a plan that expands consumer choice, increases coverage, delivers better value for the dollar, and gives states more control, without stifling job creation. As president, this is the kind of reform I would put in place.

Well, Obamacare has already increased coverage, saved billions of dollars, and somehow allowed the economy to create more jobs, but hey, if Graham has a way to do even more of all that, great! Except that he doesn't. In fact, presidential candidate Graham's only "issue" is doing more war, all over the place, because someone told him that being commander in chief is the only part of the gig that matters.

Every GOP candidate for the Republican nomination should know that this decision makes the 2016 election a referendum on the full repeal of Obamacare.

I have made repeal of this disastrous law a top priority since the first day I arrived in the Senate and have made its repeal central to my campaign. Any candidate not willing to do the same—and campaign on it every day—should step aside.

We sure love watching Cruz whip it out and swing it around to show how tough he is. Unless, of course, he's asked about the Confederate flag and then, huh, all of a sudden, he's not sure what to think because everyone has a real good point. Best leave it up to other people.

Republicans must outline a clear and coherent vision for health care to win the trust of the American people to repeal Obamacare. And right now, I am the only candidate to put forward a comprehensive plan.

OK, so what is the comprehensive plan from the only candidate with "a Masters Degree in literature with a concentration in healthcare policy"? It is ... something! And once he decides to share it, hoo boy, we will all be so impressed, for sure.

Marco Rubio, however, has a plan, or at least a nifty name for his plan:

Rubio at least had someone type up a whole bunch of words on his website to describe his plan, which is basically tax credits, kind of like Obamacare, only different, and deregulating insurance companies so they can do whatever they want to consumers without those pesky DC regulations. It worked so well before Obamacare, no reason to think it wouldn't work again, right?

Mike Huckabee, as you know, does not recognize the authority of the Supreme Court, so its ruling on Obamacare is irrelevant. And "judicial tyranny." But here is his entire healthcare plan:

It’s time we repealed Obamacare and replaced it with truly affordable, patient centered-health care reform, and I look forward to laying out my ideas on this issue.

Let's remember that Rick Perry already tried running against Obamacare in 2012, before he oops! forgot how, so you'd think Perry would already have a replacement plan figgered out. Oh, except that Rick Perry doesn't not give a fuck if people have health insurance, as he recently explained, because that's not how he likes to "keep score." So never mind.

Rick Santorum, he's got a lot of ideas about a lot of things, doesn't he?

That's it. That is literally all he has. Ask your doctor if #RICK2016 is right for you.

How's about Dr. Ben Carson, the medical doctor? Surely he must have some thoughts on how to improve healthcare in America:

Rand Paul is also a "doctor," so he's given it a lot of thought too. Here's what he's offering:

As your President, I will ensure that real free-market principles are applied to the American health care system so that it is responsive to patients, families, and doctors, rather than government bureaucracy.

We don't speak libertarian gibberish, but pretty sure that means he's going to disband the government and shove it right up your vag, for freedom.

What about Carly Fiorina? She was a bidness lady one time, maybe she has A Idea:

The lasting solution here is what we've been saying all along. We need to repeal ObamaCare. It hasn't worked. We need to do the one thing we've never tried in our healthcare system—real competition. We know that competition provides lower prices and higher quality.

OK, now we are talking! Repeal and replace with "real competition." Those are the kinds of details we expect from such a successful bidness lady as Carly "Hey, running Hewlett-Packard worked out real well for me" Fiorina.

Very Serious Candidate Donald "Trump" is unaware that the Supreme Court upheld Obamacare on Thursday, and has no thoughts whatsoever. Besides, he's busy yelling at Mexico.

Oh, right, almost forgot. New York's former governor, RINO George Pataki, is also a candidate and is also sad about Obamacare and also doesn't have a replacement plan yet, but probably something something 9/11.