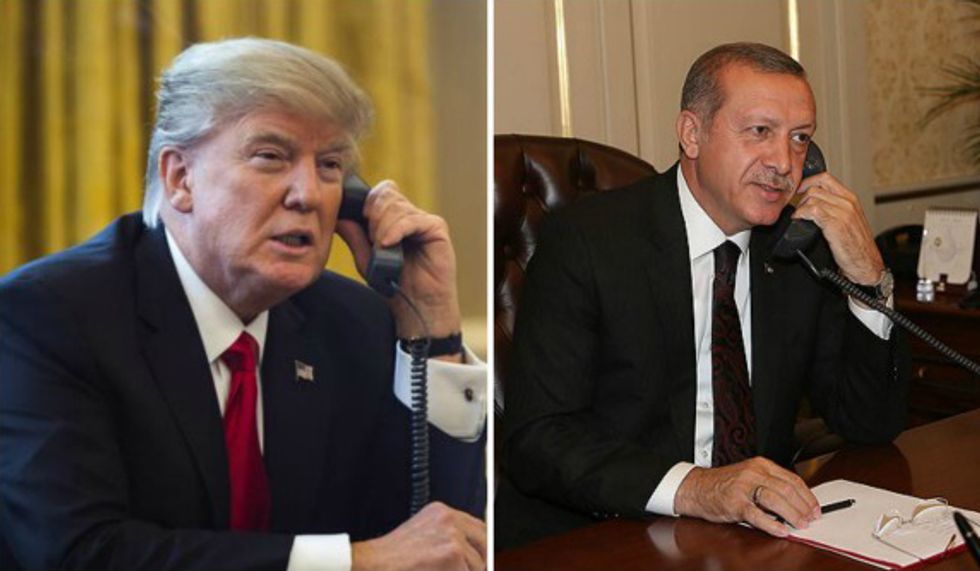 The Islamist regime of Turkish president President Recep Tayyip Erdoğan scored a YOOGE victory in its election Sunday, where the question on the ballot was, "Should we keep being a corrupt parliamentary democracy, or should we say fuck it and just let Erdoğan be dictator?" A little over 51% of Turkish voters picked the latter choice, though the New York Times reports the president's referendum was expected to win by WAY more than that. About five seconds later, the Organisation for Co-operation and Security in Europe (OSCE) issued a statement that called the election process corrupt and unfair, and noted there were "voting irregularities." Did we mention this election happened under a declared state of emergency?

"We will continue down our road," he said. "This country held the most democratic elections that have never been seen in any other country in the West."

Oh, lordy. (Sidenote: Remember that time then-Secretary of State Hillary Clinton made an enemy for life out of Vladimir Putin when she had the balls to point out that HIS elections were bullshit? Good times.)

As The Telegraph reports, the U.S. State Department was waiting for OSCE to weigh in before it said anything, but now that it has, here's what State thinks:

If you cannot click to embiggen that, the gist is that State acknowledges the OSCE's report, including "observed irregularities on voting day and an uneven playing field during the difficult campaign period, which took place under a state of emergency." State goes on to encourage Turkey to uphold its fucking Constitution and protect its citizens, but says we can still kinda be friends, because YOLO. (This has been our foreign policy toward Turkey for a hot minute now, because "NATO" and also "reasons.")

So cool, the United States government is presenting a united front in calling Turkey and its president on their shit. HAHAHA FOOLED YOU, the orange toddler in the White House had other ideas, and decided to call the Turkish president on the Obamaphone and give him a pat on the butt:

If you can't embiggen THAT, it says this:

Turkey dictator president, you just did something TREMENDOUS. Your win in the Turkey electoral college was historic and if three million illegals in the California part of Turkey hadn't voted, your win would have been EVEN YOOGER. I look forward to using your country to grift some more money for my hotel/mobster/money laundering business! Grab 'em by the pussy!

Now, for the record, White House spokes-idiot Sarah Huckabee Sanders says Trump's tongue-bathing phone call wasn't an endorsement of the results of the referendum, but that Trump had to call because "the Middle East is a rough neighborhood," and there are "bullies" like Syria over there, so we gotta stick with our pals, to which we reply, "Oh fuck off, Mike Huckabee's daughter."

Haha just joking around, that is a 2012 tweet from Ivanka thanking her good old buddy Erdoğan for coming to visit her and her daddy, as they opened one of their tacky hotel buildings in Istanbul. But that was then and this is now, and we're sure there aren't any conflicts of interest with how Trump treats folks like Erdoğan when it's just bid'ness, and how he'll treat them as the U.S. American president. Trouble is, as Mother Jones notes, Trump literally admitted he has a conflict of interest with the Turkish government back in 2015, in an interview with Steve Bannon, you know, back in the days when Donald Trump did not know Steve Bannon.

Also, Trump LOVES fuckers like Erdoğan, because he has a penchant for falling in love with literally the worst human rights-abusing leaders on earth. Exhibit A: OMG PUTIN! Exhibit 2: That creep in the Philippines.

Oh, and do you remember how Trump's original national security adviser, Michael Flynn, was LITERALLY A FOREIGN AGENT of the Turkish government? Trump claims he was shocked to find that out, but Trump lies too much for us to believe that shit. It was no big deal though, because Flynn was just (allegedly! haha) doing backroom deals to circumvent American extradition law and kidnap this exiled Turkish cleric, to give him back to Turkey president, probably so Turkey president could kill the guy. Totally normal!

Michael Flynn could not be reached for comment about Erdogan's YOOOGE win, because his mouth was full of Turkish government dick at the time, allegedly.

We'll close with a voice of reason, the Republican chair of the House Foreign Affairs Committee, Rep. Ed Royce, because that's how far gone Trump is as an American leader, that we're approvingly quoting Republicans on foreign policy:

Any time Congress is ready to push that impeachment button, that'd be fine with us!