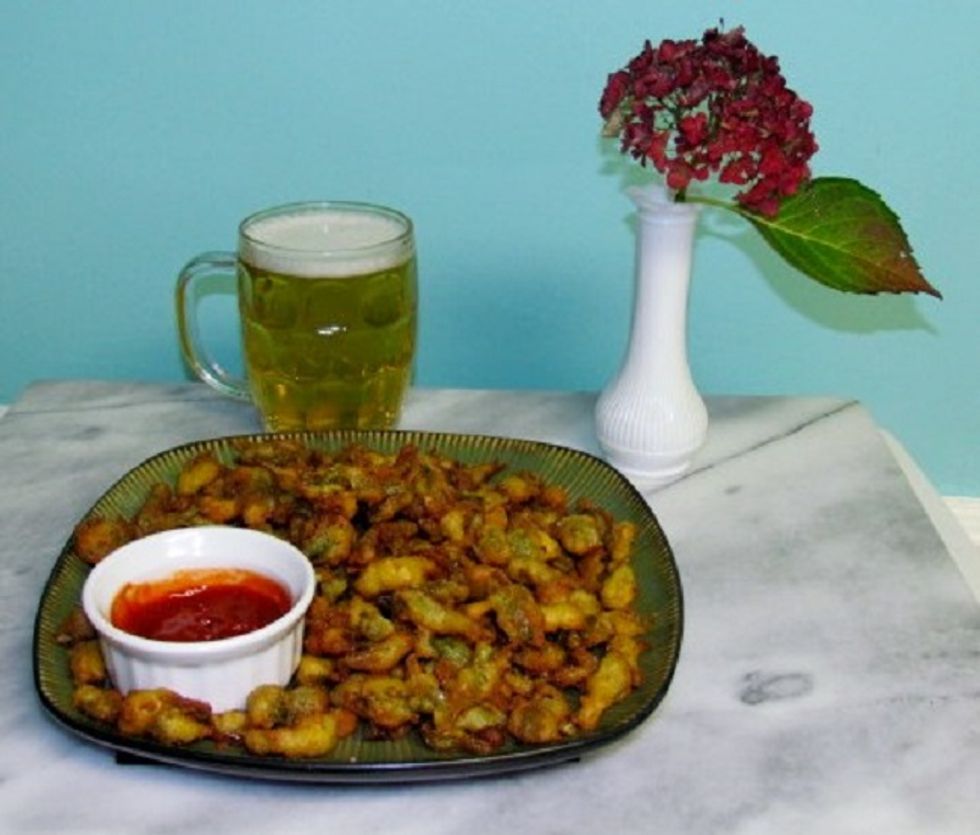 Let's dive into the deep fryer and share the wonders of beer batter. We've got a tomato vine that is alive and set with a bunch of little green fruit that need to be harvested before the first frost. However, the applications of beer batter are only limited by your imagination, budget, and ingredient availability. Say goodbye to Daylight Savings Time with fried little bits of summer.

First, a disclaimer demanded by the Wonkette legal team: Deep frying is dangerous, and could result in bodily harm, death, property damage, fat butts, and/or facial break-outs. Be careful and moderate, for fuck's sake.

Do you have a countertop deep fryer? This is a nice, cheap model from Amazon. We used to have one, but Mrs. Chesterfield made us get rid of it because some of us are not the best at cleaning up after ourselves.

You don't have one of those? No biggie, just use a deep pot, and monitor the temperature of the oil with a candy/deep frying thermometer.

You don't have one of those either? Don't worry, we'll discuss some other options later.

If you don't have the countertop fryer with the basket, you'll also need a metal slotted spoon or one of those sweet spider strainers.

1/2 cup or so beer (American Adjunct Lager, which is hipster-speak for domestic rice beer swill)

A shake or two of Old Bay

Mix it all up in a shallow dish until it's nice and smooth. Drink the rest of the beer (unless you know where to get 1/2 cup cans of beer).

Cover the dish, and let it stand (or sit, if it's tired) for a few hours. You can make it a day or two ahead and put it in the fridge, too. Just remember to take it about a half hour before you're going to cook.

This formulation is specifically designed for fried green tomatoes (also good for onion rings), but the flour, beer, and seasoning parameters can be changed according to what you're going to fry. We're including corn meal for flavor and a little bit of gritty texture. If you were to make apple fritters, maybe you'd use only all-purpose flour, a nice Oktoberfest marzen, and a pinch of sugar and cinnamon.

Set up your frying rig to get the oil up to 375 degrees Fahrenheit. NEVER fill the frying vessel more than halfway with oil. Speaking of which, the frying medium could be regular old vegetable oil, vegetable shortening, canola oil, lard, or peanut oil. If you don't have a fryer with a thermostat or a deep frying thermometer, the oil's ready when a cube of white bread quickly fries up to golden brown upon being dropped in. Another method for telling if it's hot enough, which YOU SHOULD NOT EVER USE, is to flick a drop of water into the oil. It will sizzle and make loud pops if it's ready. Or it will cause the oil to overflow and burn your house down. We cannot emphasize enough that you should not use the water drop method.

Today we're frying late harvest green cherry tomatoes, cutting the bigger ones into quarters and the smaller ones in half. Cut 'em up, throw 'em in the batter, and stir gently to coat.

Get a plate ready by placing absorbent paper on it.

Allow the excess batter to drip off each piece of tomato, and carefully drop them into the oil. Do not overcrowd the pot, for a number of reasons: you could get dangerous overflow, the oil could lose its heat, and they could all stick together. Watch out for the hot oil jumping up and trying to burn you. This part of the process is messy and dangerous. Use great care. Remember what we just talked about with the water drop.

They're done when they float to the top and turn golden brown and delicious. Scoop them out, let the oil drip back into the fryer, and place them on your plate. Sprinkle with salt and pepper.

Once you've fried all the batches of tomatoes, you may have some leftover batter. Throw it away, or have a test kitchen session of your own.

Try to wait a minute for them to cool before you eat them. You're probably going to burn your mouth on one.

Have fun with dipping options. We like a two-to-one combination of ketchup and sriracha.

Don't be an asshole; dispose of your spent oil appropriately. Turn it into fuel for a diesel engine, or call your local waste disposal authorities to figure that out.