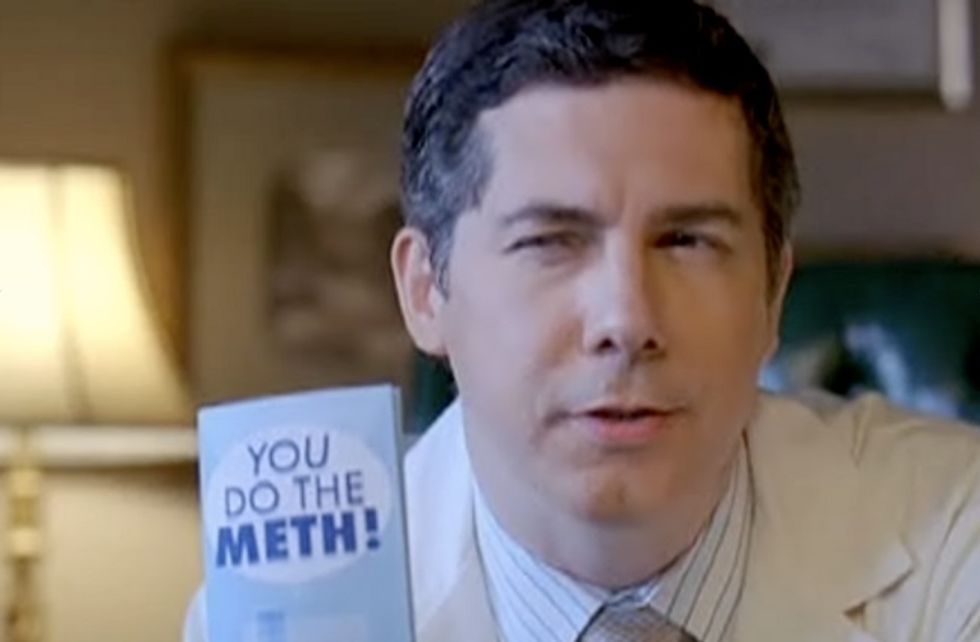 We're tired of recycling those pics of Jackson at the White House podium, is all

Donald Trump's attempt to blame Democrats for all the woes of Dr. Ronny Jackson, his woefully unqualified former nominee to head the Veterans Administration, were undermined a bit yesterday evening by a CNN report revealing that last November, Mike Pence's personal doctor had tangled with Jackson and told Top People in the White House about what a jerk Jackson was. Golly, that Montana Democratic Senator Jon Tester sure was sneaky in his single-handed campaign to go after Jackson, huh? He even got access to Barack Obama's time machine.

CNN is pretty darn pleased with its scoop, especially since it involves some actual evidence:

The episode -- detailed in three memos by Pence's physician -- is also the first documentation that has surfaced involving a specific allegation of medical misconduct by Jackson.

Get ready for Trump to say CNN made the whole thing up, since whoever gave the memos to CNN insisted they not be published and that CNN not name Pence's doctor. Pence's physician didn't have any comment on the story, either, so maybe the source was ... Jon Tester!

The whole mess started last September, during one of Team Trump's extremely rare visits to Camp David. Karen Pence experienced some sort of medical problem -- thoughtfully and lawsuit-avoidingly not detailed by CNN, because that shit's private -- and was taken to Walter Reed hospital in Bethesda, Maryland. Mrs. Pence wasn't Jackson's patient, but he had to go and be a big old buttinski anyway, according to CNN's rather careful description:

[Jackson] intervened in the situation involving Mrs. Pence, leading to "an inadvertent disclosure of SLOTUS' medical information in a situation where ultimate discretion was of utmost importance," according to the memo, which does not describe the information disclosed.

Jackson asked for several reports on her condition from the physicians who initially treated her at Camp David, though the physician noted it was done "without malicious intent to circumvent their medical knowledge."

Jackson then shared information with the senior medical providers involved in the matter, and according to the memo, briefed "multiple parties" on Trump's White House staff "without specific consultation from the physician to the vice president," prompting the concerns that he disclosed Mrs. Pence's private information. He made an order to call in the on-duty specialist at Walter Reed and made plans for her evacuation from Camp David, according to the memo, though he later denied doing so in a private meeting with the physician.

Admittedly, we're not talking about drunken hotel blackouts or self-prescribing here, but if Jackson jumped into the Karen Pence's treatment and went behind Pence's doctor's back, that seems out of line, and if he briefed staffers abut her condition without her permission, that could be, as the physician contended, a violation of the HIPAA privacy law. Karen Pence was also not happy that Jackson had apparently blabbed about her condition without consulting her:

After Mrs. Pence's physician briefed her about the episode, she "also expressed concerns over the potential breach of privacy of her medical condition," the memo said. Karen Pence asked her physician to direct the vice president's top aide, Nick Ayers, to inform White House chief of staff John Kelly about the matter. Subsequent memos from Pence's doctor suggested Kelly was aware of the episode.

When Pence's doc took those privacy concerns to Jackson, Jackson acted like he was King Shit of Fuck Mountain, and laid into the mere physician to the vice president for questioning the authoriteh of the physician to the Actual President of the United States:

In one of two tense encounters described in the memos, Jackson made the vice president's doctor feel uncomfortable with his "accusatory" tone, "unprofessionalism" and "intimidating" and "aggressive" behavior during their private meetings. Jackson told the doctor to "let the issue go" and to "let things go ... if I am to succeed in my career," the physician wrote.

CNN quotes briefly from one of the memos, which gets the point across but, sadly, doesn't have the prose panache of James Comey's memos to himself:

"This meeting summoned by Dr. Jackson appears to have been in retribution for me verbalizing concerns over the protection of the SLOTUS' medical information and his inappropriate involvement in the decision-making process of her care, which is consistent with previous behavior that I have received from him in the past," the memo says, referring to the second lady of the United States. "This unprofessionalism fosters a negative command climate that removes any opportunity for open, professional discussion."

As for the doctor's concerns about privacy -- which, let's not forget, Karen Pence was worried about too -- Jackson explained that, just as there's no crying in baseball,

"Dr. Jackson stated that it is not always possible to adhere to HIPAA at the White House," the memo said. The memo said that Jackson asserted to the physician that "he must be involved" in medical issues at Camp David and Walter Reed because they are "presidential assets" -- even if those medical issues don't involve the First Family.

Also, shut up, pissant, Ronny Jackson is the Alpha Doctor. CNN said a former White House medical official described Jackson and Pence's doctor as having a "strained relationship," which sounds about right. One memo says Jackson also got angry at the physician for having taken his complaints up the chain of command, and was peeved that John Kelly knew about the matter. That sure fits with the impression that emerged from the medical staffers who told Senate staffers Jackson was a kiss-up/kick-down bully -- sycophantic to those above him and a right bastard to anyone below.

CNN says White House defenders of Jackson downplayed the matter as a tiff between two doctors who didn't get along well, and that Jackson behaved appropriately, but that a White House spokesperson declined to offer any official comment. Mike Pence's press secretary, Alyssa Farah, said everything was cool now, perfectly fine, and that Karen Pence

has been briefed on all the facts related to a private matter regarding her health care. She is grateful for the professional care she received from all White House medical personnel who resolved the matter quickly. She considers the matter closed and has no further comment on the situation.

And then there's this coda, which again sounds like the portrait of passive aggression other anonymous complaints paint of Jackson. In a second meeting, Jackson

said that Kelly was "good with him and everything" -- and Jackson urged the doctor to let the matter go. The vice president's physician continued to raise concerns over Jackson's behavior, even suggesting resigning to avoid seeing him.

After being informed of his "intimidating" behavior, Jackson "concurred with that statement, and responded that even his wife tells him he can be perceived as intimidating," the memo said.

We've all had that boss at some point, yes? The one who says,"Yeah, I know I can be a jerk sometimes. But it's for the good of the team, you know? Now stop moping and get back to work." Then as the underling leaves, they mutter "You prick."

Also too, the Daily Beast reports today that Jon Tester's office only released allegations for which staffers had two or three sources making the same claim. Oh, and if Trump wants to keep threatening to ruin Tester,

Several aides confirmed there were other details they were set to try and track down but ultimately did not pursue. At least two aides suggested Tester would feel compelled to re-start research if the attacks by Trump persisted.

Imagine that. As it turns out Trump World is also reportedly very angry at Tester's Republican counterpart on the Senate Committee on Veterans Affairs, chairman Johnny Isakson, who supported Tester going public with the claims against Jackson, but for now, the Trumpers are more interested in trying to leverage the Jackson mess into opposing Tester's Montana reelection this fall.

Which has us wondering -- would HBO be interested in a series that's pretty much Game of Thrones, but with characters from The Office? Might make for a good pitch.

Follow Doktor Zoom on Twitter He wants to emphasize that his boss at Wonkette is not one of those mean bosses, because Repbcca Schoenkopf is the kindest, warmest, bravest, most wonderful human being he's ever known in his life.