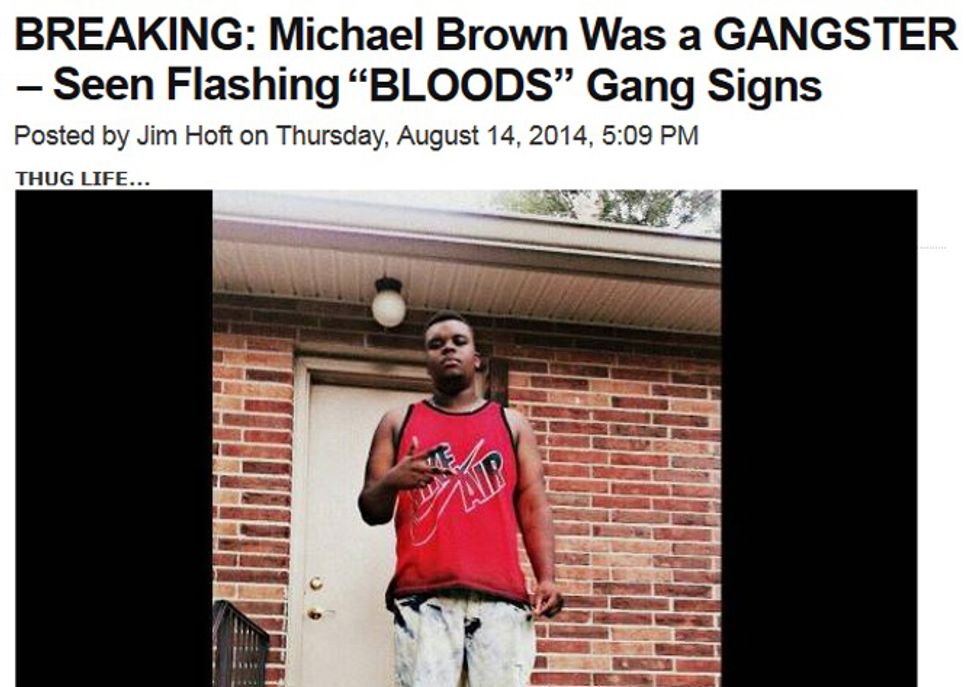 Hey, everybody, just stop feeling bad about the police in Ferguson, Missouri, shooting unarmed 18-year-old Michael Brown dead while he had his hands up -- Jim Hoft, the Stupidest Man On the Internet, wants you all to know that it's no big loss, since Michael Brown was a100% certified GANGSTER who HAD A GUN (maybe, in a Facebook photo of a completely different person -- give him time, and Hoft will probably start hinting that Brown had a gun when he was shot, too). While the photo above has been in circulation since shortly after Brown was shot, Our Stupid Hero appears to be the first to jump from "photographed gesturing like a rap gangster" to "was a GANGSTER." Hoft has since backed off that original headline, of which Chris Johnson at Little Green Footballs wisely archived a copy at Webcitation in case Hoft "tries to edit it without admitting it." Which Hoft did, of course.

Maybe even the Stupidest Man on the Internet finally figured out that enough white kids pose while making a gang signs that you can't actually call that proof of gang membership. Worse, they may even combine the gang sign with a duckface, which may indicate affiliation with a criminal organization like the WebFoot SistaHood:

By a little later Thursday evening, Hoft had dropped the "Brown was a GANGSTER" hed (with no indication that he'd changed anything, of course -- Hoft doesn't roll that way) and was running an all new scary photo and headline (since revised, again without any mention of the change):

The link in that now-removed version of the post was to a Facebook page for Dallas Anger Radio host Chris Krok; since Mr. Hoft didn't deign to note why this image is gone from his site, we can only guess it's because THAT'S NOT MICHAEL BROWN, and the picture had already been debunked a good 12 hours before he posted it.

Or that might not matter to Hoft at all; maybe he got some flak from Second Amendment heroes who pointed out that there is absolutely nothing wrong with someone taking a photo with their gun, again, somebody who IS NOT MIKE BROWN.

By the end of Thursday night, we were back to the initial photo, with a somewhat less inflamed headline:

Among the photos of Michael Brown throwing gang signs are several pics of him just cold flipping the bird -- is this now a "gang sign" too?

Also worth noting: Charles Johnson points out that Hoft is quite happy to share information from unapologetic white supremacist sites -- a photo claiming to decode the gang signs is a link from the nice KKK sympathizers at the Council of Conservative Citizens. Oh, but now we've gone and provided a link to the same site, so we're probably just huge liberal hypocrites.

In any case, the really important thing to remember is that murdered teenager Michael Brown threw gang signs. While Hoft has backed off the claim that this makes him an actual gangster, his readers have happily embraced this as evidence that Brown was a dangerous animal who needed to be put down, just like that monster Trayvon Martin, and now, white people can feel a little safer. At least it's a start.