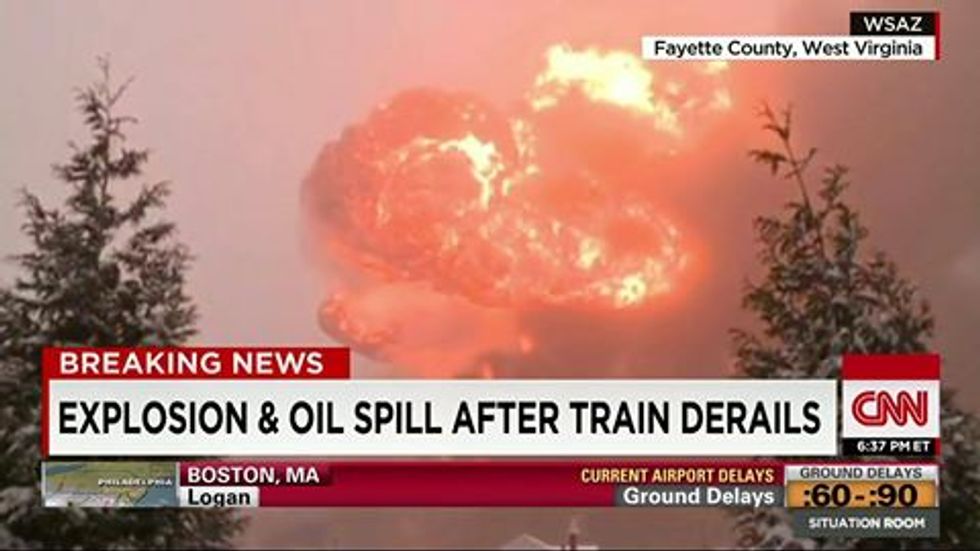 This post sponsored by a grant from the Patty Dumpling Endowed Chair for coverage of oil spills, pipeline disasters, oil train explosions, and ironic locales

If nothing else, you have to appreciate the poetry of where the latest oil train derailment and explosion happened Monday: Mount Carbon, West Virginia. Given the affinity of West Virginia politicians for the precious coal industry and its money, that might be an imperative, not a place name.

The derailment and fire involved 9 or 10 tank cars that went off the rails and exploded, resulting in the evacuation of two nearby towns and the closing of a water treatment plant as officials feared that oil had spilled into the Kanawha river. This is the second derailment and explosion of an oil train on this particular CSX rail line within a year; last April, another CSX train went off the rails in Lynchburg, Virginia, with similarly exciting fireballs and heavy black smoke. This makes "at least 17 major accidents" since 2006, what with the increased oil drilling in North Dakota and all the fracking that has made life better for everyone. It's almost as if that $2-a-gallon gas had other costs or something!

WSAZ, the source of that cool explodey interview footage up top, reports that the water plant has been reopened after tests showed no crude oil in the water near the plant's intakes, some three miles downstream of the crash. About 2000 people in five communities have been advised to boil their tap water until further notice once service is restored.

The railroad cars involved in the crash are a newer model of tank cars that are supposed to be more resistant to puncture and explosion than older versions that have been involved in previous derailments and fires. All of the cars in the train were newer, upgraded model "CPC 1232" tankers:

The CPC 1232 is the newer, supposedly tougher version of the DOT-111 cars that were manufactured up until 2011. The DOT-111 cars have been faulted by regulators and operators for a number of years. U.S. and Canadian authorities, under pressure to address a spate of fiery accidents, are seeking to phase out the older models. The U.S. Transportation Department has recommended that even these later models be updated with improved braking systems and thicker hulls.

Oh, well, guess that means tougher safety standards will just cost profits and jobs, so there's really no need to implement them, right? Then again, if this train had been made up of the older style cars, West Virginia could have been treated to the kind of disaster that hit Lac-Mégantic, Quebec, in 2013, killing 47 people.

In the meantime, let's not forget that West Virginia isn't too worried about occasional enhancements of its drinking water by companies like CSX or Freedom Industries.

The coal industry is lobbying heavily for a bill that would actually weaken the state's clean-water laws, even after last year's huge chemical spill that poisoned the water supply for tens of thousands.

A superstitious person might think that a huge oil fire and spill occurring at the same time the legislature is considering deregulation of polluting industries could be a "sign" of something. Most likely it means that God is warning West Virginia that it needs to stop gay marriage.