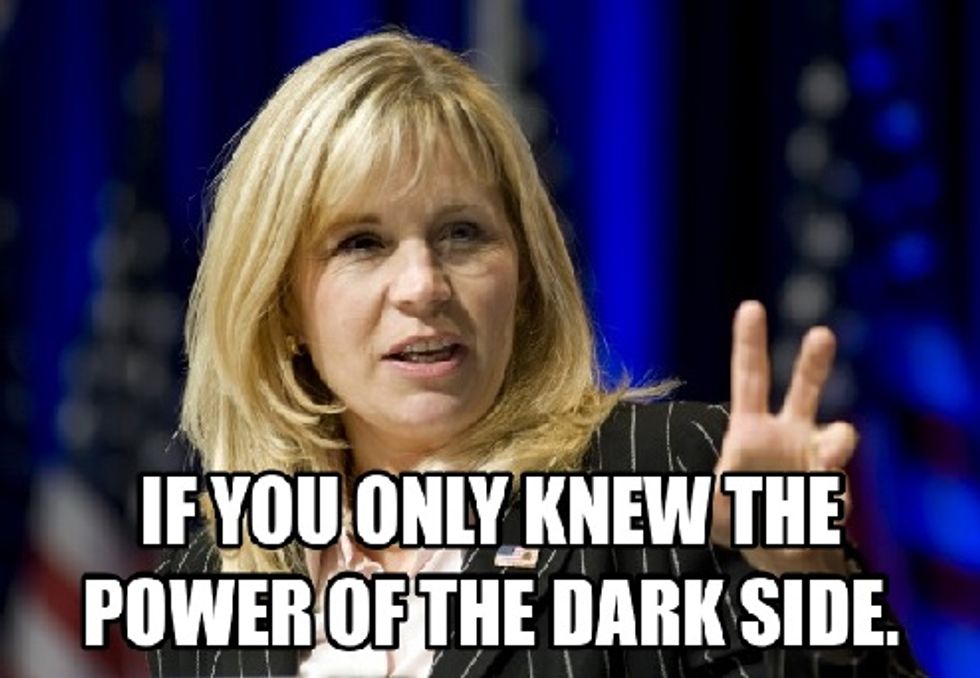 Senate candidate andpurported Wyoming resident Liz Cheney restated on Fox News Sunday that she is a big fan of "the traditional definition of marriage," which is the bestest definition of marriage there ever was. In response, Cheney's sister Mary and her wife Heather Poe reminded Liz of their existence, gently pointing out that Liz Cheney is a terrible human being. On Fox, Liz had dismissed her sister's same-sex marriage as "just an area where we disagree," which probably didn't sound quite as diplomatic as she'd hoped, somehow. Mary Cheney wrote on Facebook yesterday,

“Liz -- this isn’t just an issue on which we disagree, you’re just wrong -- and on the wrong side of history.”

Jeez, so touchy. Can't you take your sister's complete dismissal of your marriage, your family, your wife and your two children in the spirit in which it was intended, as a naked appeal to the right wing?

Liz has been a guest in our home, has spent time and shared holidays with our children, and when Mary and I got married in 2012 - she didn't hesitate to tell us how happy she was for us.

To have her now say she doesn't support our right to marry is offensive to say the least.

She also added that her peripatetic sister-in-law might want to give some thought to the fact that moving from one state to another can have even greater implications than whether one qualifies for a residential fishing license:

I can't help but wonder how Liz would feel if as she moved from state to state, she discovered that her family was protected in one but not the other.

I always thought freedom meant freedom for EVERYONE.

Politico noted that at least one rightwing PAC has criticized Liz Cheney for not hating gays vigorously enough; an outfit calling itself "the American Principles Fund" has spent $140,000 to buy ads reminding Wyoming that she had supported the State Department's giving benefits to same-sex partners.

On Fox, Liz Cheney emphasized that her opposition to gay marriage wasn't personal: "I love Mary very much,” she said. “I love her family very much."

You know, apart from the fact that she shouldn't legally have a family at all. Other than that, she and Mary are just peachy.