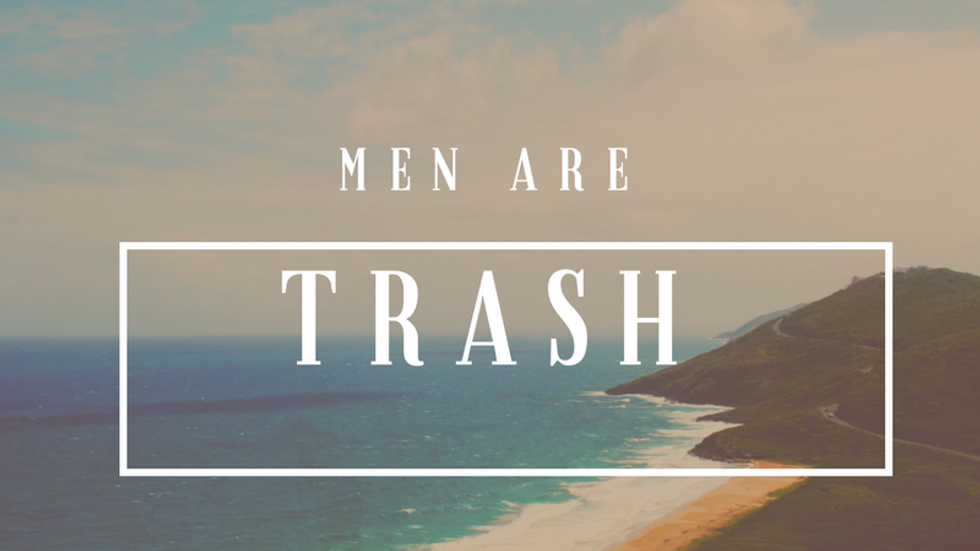 Are you a woman who is feeling slightly overwhelmed by the last few months? Or, perhaps, an entire lifetime of dealing with shitty men doing shitty things like grabbing at you, or howling at you as you walk down the street. Do you sometimes feel the need to vent a little on Facebook? Maybe by saying something like "BAN MEN" or "men are scum" or "men are trash" or what have you?

Well! If you do, you could find yourself banned from the site for a few days! In fact, I know several women who have been banned for doing just that. I also have several friends who have been banned for complaining about white people doing messed up things. Wonkette, even, was briefly banned last year for replying "fuck off" to a guy who came on our page and called us "Jew cunts." "Hmmmm," we thought at the time, "that seems unfair!"

This is largely because, for all their talk about how much they hate censorship, certain conservatives have a habit of searching for and reporting users who use these phrases ("ban men" or "men are scum," not "fuck off") in their posts, often in brigades. Not because they sincerely think that we are serious, that we are actually going to "ban men" and are legitimately concerned that we may do so, but because they are snide and spiteful and are just trying to fuck with us.

The Daily Beast reports that many women -- female comics in particular -- have been banned by the site for saying things like this, while simultaneously being told that people who actually harass and target them are not in violation of the platform's rules. When comedian Rae Sanni simply wrote on Facebook about another woman being banned for saying "men are scum," she was banned herself, and then banned again for explaining why she was banned. However, when she tried to report those who harassed her with racial slurs, she was told that those comments were totally fine and not a bannable offense at all. Weird!

The reason for this, apparently, is that Facebook considers men a "protected group."

When reached for comment a Facebook spokesperson said that the company is working hard to remedy any issues related to harassment on the platform and stipulated that all posts that violate community standards are removed.

When asked why a statement such as “men are scum” would violate community standards, a Facebook spokesperson said that the statement was a threat and hate speech toward a protected group and so it would rightfully be taken down.

Facebook has long had some very strange policies regarding who is and is not a "protected group." They consider "white men" a protected group, but not "black children," according to their official standards. So a Nazi can go right off saying derogatory things about black children, but no one can complain about white men. Nice!

Rather than contributing to a harassment-free, bigotry-free environment, this policy is being used as a cudgel against those who speak out about oppression, privilege and ignorance. It is doing the opposite of what it is intended to do. It is doing the exact opposite of what rules protecting "protected classes" are supposed to do (level the playing field), at the expense of the marginalized people who actually need that protection.

Facebook is not taking into account the fact that there is a very, very big difference between women complaining about men, or people of color complaining about white people, and the reverse of that. Just like there is an obvious difference between a Nazi going off about Jewish people and a Jewish person going off about Nazis, or a poor person saying "fuck rich people" and a rich person saying "fuck the poor." It's punching up versus punching down. To pretend to not understand the differences here is absolute ignorance.

Feminists have long been accused of being "man haters" -- and, more recently, accused of being "misandrists" as they are trying to get fancy about calling us "man haters." You know, because it would just be absurd to think that we would have reasons for wanting equal rights, wanting reproductive rights, and not wanting to be sexually assaulted or harassed other than simply hating men and wanting them to be sad and have all their days ruined. The "man hater" label has also been historically used as a means of discouraging women from fighting for their own rights, along with other tropes like being unattractive or godforbid a lesbian or woman who does not shave her legs.

I have known women all my life who have said they didn't want to identify as a feminist because they don't want people to think they hate men, because Oh god, then I'll NEVER get a boyfriend! -- a thought which is unfortunately sometimes scarier to young women than the idea of losing their reproductive rights. Online, I've often been inundated by men sending me videos and memes of "angry feminists," in a "You don't want to be like THESE women, do you?" sort of fashion. That one video of activist Chanty Binx, who has been cruelly tortured out of public life by Men's Rights Activists, is routinely shown to women who dare to argue for their rights as some kind of cautionary tale.

These tropes don't just exist for no reason. "Oh god, you're not one of THOSE angry feminists, one of THOSE angry black people" is, in many ways, far more psychologically effective in getting people to shut up than just telling them to shut up is. It puts people on automatic defense, puts them in the position of having to soothe and reassure the person making the accusation.

What a cheeky slogan like "ban men" or "men are scum" does is take this particular power away from oppressors -- which they are mad about, because they happen to be very fond of that power, very fond of that threat. When I say "Ban Men," what I'm really saying is "Go ahead, call me a man hater or a misandrist! You have no power here, be gone!"

I want social media to be better about curtailing harassment and hate speech, but a one-size-fits-all approach that can be (and is!) disingenuously abused by those doing the actual harassment in the first place is not the way to go.