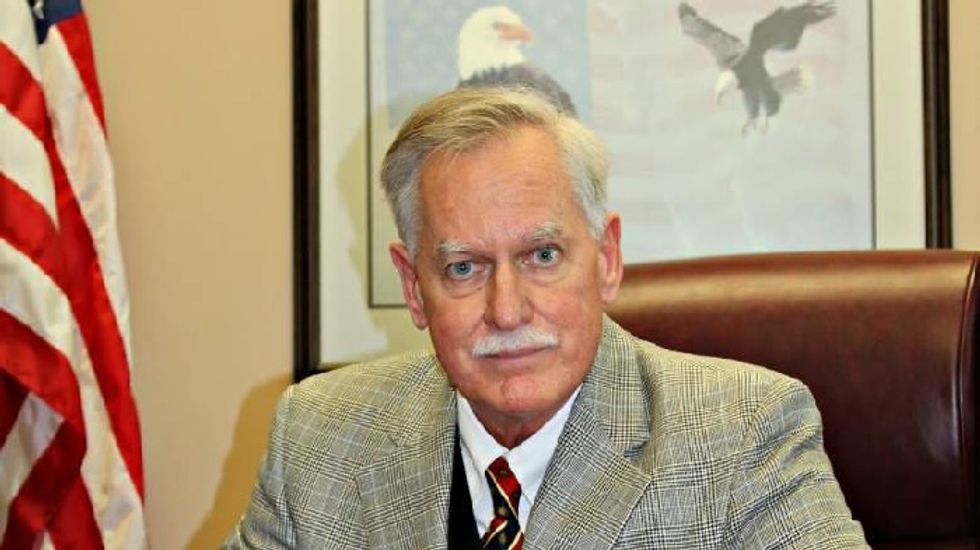 Let's meet Robert Doggart, who ran last year as an independent for Tennessee's 4th Congressional District (and lost rather badly, getting just 6.4 percent of the vote). But he's not the sort of guy to just dabble in politics as a fringe candidate; he decided to face America's problems head on, plotting to lead a militia attack on a Muslim community in New York, a bit of patriotic direct action that could get him five years in prison, which seems maybe a little light for planning an act of terrorism, but it's not like he's a jihadi or anything. Besides, we all know there are no rightwing terrorists.

Doggart was arrested last month after the FBI recorded him planning to attack a Muslim community in Hancock, New York -- also known as "Islamberg" -- which Sean Hannity had identified as the location of a "terrorist training camp." Doggart and his merry band of patriots planned to burn down the community's mosque, school, and cafeteria, and of course to kill any community members who might try to stop them.

“Our small group will soon be faced with the fight of our lives. We will offer those lives as collateral to prove our commitment to our God,” Doggart said in a Facebook post, according to court documents. “We shall be Warriors who will inflict horrible numbers of casualties upon the enemies of our Nation and World Peace.”

Doggart was charged with soliciting others to violate civil rights, attempting to damage religious property, and making threats through interstate communication. In a plea deal, he pleaded guilty only to the last charge, and faces up to five years in federal prison, plus a possible fine of up to $250,000. The judge in his case hasn't yet signed off on the deal; in the meantime, he's confined to his home under bond, because again, how could you look at a nice old man like that and call him a terrorist?

Doggart explained that he only intended to burn down the buildings, but that he was ready for a shootout if need be:

“If there’s a gun fight, well there’s a gun fight. And I want to come home ’cause I love my family and I want to see my kids again. But I also understand that if it’s necessary to die then that’s a good way to die,” Doggart said during a March phone conversation with an unnamed militia member from South Carolina.

He also had big plans for taking on what he figured had to be the meanest terrorists in the world when he got to Hancock, a community of African-Americans who have converted to Islam, who local authorities told him were no trouble at all. In another recording, Doggart said:

“When we meet with this state, the people that we seek will know who we are. We will be cruel to them. And we will burn down their buildings.” He said if anybody attempts to “harm them in any way, “our standoff gunner will take them down from 350 yards. The standoff gunner would be me.”

Yes. And the hammer is his penis.

Doggart also bragged about taking a machete along as a last resort, so he could "cut them to shreds." We're still waiting on word from Rep. Steve King as to whether Doggart's plot would fit the definition of discrimination against Muslims, a thing King says doesn't exist.

In an April 2 recording, Doggart also seemed to suggest that if burning down Islamberg didn't work out, he might go all John Brown at Harper's Ferry, apparently forgetting how well that particular attempt to spark an uprising went:

“I’ve got this battalion that I command and they want to go up to uh a place and take action. There is all these people all over the country that what to start what we call a flash point. … so sick and tired of this crap that the government is pulling that we go take a small military installation or we go burn down a Muslim church or something like that.”

Muslims of America, the group that organized the communities that Doggart targeted, issued a press release calling Doggart "an example of the results of unchecked and rampant Islamophobia which has spread lies for years about our peaceful community," demanding to know what, if anything, was being done about his accomplices (assuming that he had any that weren't FBI informants), and adding, "All would agree, if a Muslim did this, the perpetrator would be immediately identified as a terrorist then prosecuted to the fullest extent of the law."

OK, sure, but the point is that a Muslim didn't do it; it was an old white guy, and so he is automatically a lone weirdo who is not representative of the fine patriots and activists who just want to keep America safe from the depredations of the "Religion of Peace." It's pretty clear who the real barbarians are here: the liberal media, who want to smear the Patriot and Militia movements by suggesting their constant talk of armed rebellion and taking the country back could possibly have been a factor in this lone nut's decision to go to war. And Fox News, of course, is just reporting so you can decide.

No word yet on whether Mr. Doggart has plans to run again for office after he serves whatever short time he gets, or if he'll be joining Alex Jones as a consultant. Doggart has been identified in most news stories as a minister in the "Christian National Church," one of those ordination-by-website religions; as an ordained minister in the Universal Life Church, Yr Doktor Zoom feels compelled to condemn the actions of Rev. Doggart, who definitely does not represent the values of the instant-ordination community.