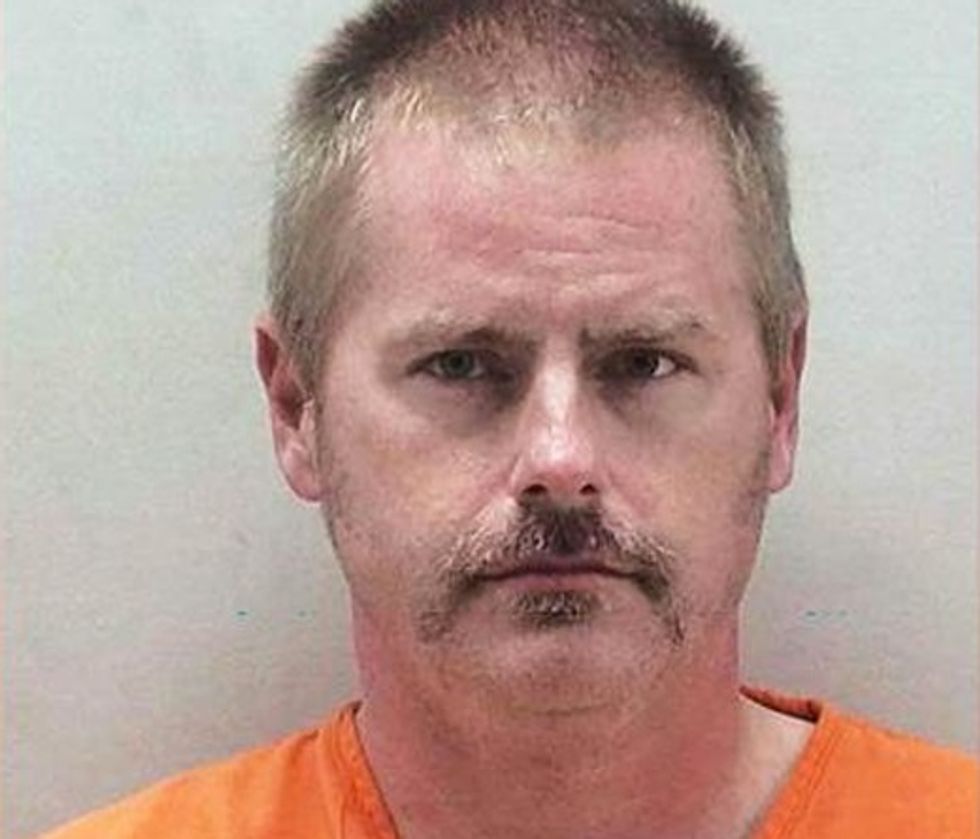 Eric Krieg of Munster, Indiana, was a man with a mission. He had himself a blog called "Blue County in a Red State," where he blogged with the creative nym "Buzzcut," and proudly proclaimed that he documented "Life in the most corrupt county in America." The blog went to internet limbo some time ago but is still archived on the Wayback Machine. Krieg was also one of those perennial candidates for local office, in this case Lake County Council and surveyor. In 2013, a local columnist called Krieg the county GOP's "unofficial mud-thrower" but defended Krieg's right to free speech -- adding, "It would just be nice if he would get something right once in a while."

But now, what Eric Krieg mostly will be known for is that mug shot up there, since he was arrested last week after confessing he'd mailed a pipe bomb to one of his "enemies," and a threatening letter (with a bullet included) to another. The pipe bomb never reached the attorney he'd targeted; it blew up in an East Chicago, Indiana, post office, injuring a female postal worker who was seven months pregnant (she's OK, but was afraid she might lose her baby).

Let's say it together, kids: He seems nice.

Krieg's journey from crusading teabagger idiot with a blog to indicted mail bomber ("knowing possession of a destructive device and transporting explosive material") grew out of an ongoing blog attack on the mayor of Hammond, Indiana, Thomas McDermott Jr., whom Krieg frequently accused of being corrupt, because all Democrats are corrupt. In a September 2013 blog post (which sadly appears not to be archived), Krieg wrote that the mayor's brother, Aaron McDemott, had been arrested, and Aaron McDermott sued him. Krieg settled for $60,000, and at some point later, filed for bankruptcy. So naturally enough, Krieg took matters into his own hands and mailed a pipe bomb to the attorney who'd represented Aaron McDermott. Six hours later, the bomb went off, injuring the postal worker, who HuffPo reports suffered only minor injuries -- "cuts, abrasions and bruises to her head, legs, and feet," plus the trauma of fearing for her pregnancy. But hey, Krieg was on a mission against corruption, and you can't make an omelette without maybe blowing up some pregnant postal workers.

The intended target of the pipe bomb told FBI agents he suspected that representing Aaron McDermott was just one reason Krieg had it out for him because he'd supported a pro-LGBT ordinance in Munster that Krieg "might have disagreed with."

While he was at it, Krieg sent a letter with a bullet taped to it to another man who had criticized him online back in 2013; the letter read "The next one will be in the back of your head." All perfectly normal, of course, because we are in a war for the future of our once-great country. The guy who received the bullet was apparently deserving of a death threat because he'd said on a web discussion board that the defamation lawsuit had served Krieg "a huge cup of STFU, that’s for sure." He'd also reposted another user's comment that Krieg was a "first class asshat, and a typical right wing tea-bagging idiot." You see what happens when blogs allow comments?

After a press conference after Krieg's arrest, Mayor McDermott told a reporter for the Northwest Indiana Times that Krieg "was the first person I thought of" after the September bombing, adding "I gave (the FBI) a few other names but he was No. 1 on my list." McDermott had a few other things to say about Krieg, too:

“He’s really, really weird. He’s really strange. He’s really, like, an evil, uber extremist. And that’s extremism I’m not trying to make a Democrat or Republican statement about this, but extremism is bad. He is an uber, right winger and this doesn’t surprise me a bit,” McDermott said.

Hmmm. We're inclined to think maybe the mayor's putting too much effort into not seeming partisan there, since it seems fairly clear Krieg, whose blog's tagline in 2013 was "Documenting Lake County Democrat Corruption since 2007," didn't worry too much about "both sides." But yes, we get the point that most folks in political flame wars use the term metaphorically.

Mr. Krieg faces a maximum sentence of 10 years on each of the charges against him and is scheduled for an appearance in U.S. District Court Tuesday, where more charges may be filed against him, according to U.S. attorney Thomas Kirsch. We're looking forward to the inevitable wingnut blog posts blaming Kirsch's actions on violent liberals who simply pushed a good man too far.

Yr Wonkette is supported by reader donations. Please click here to help us pay the bills, keep the servers running, and feed the bomb-sniffing dog.