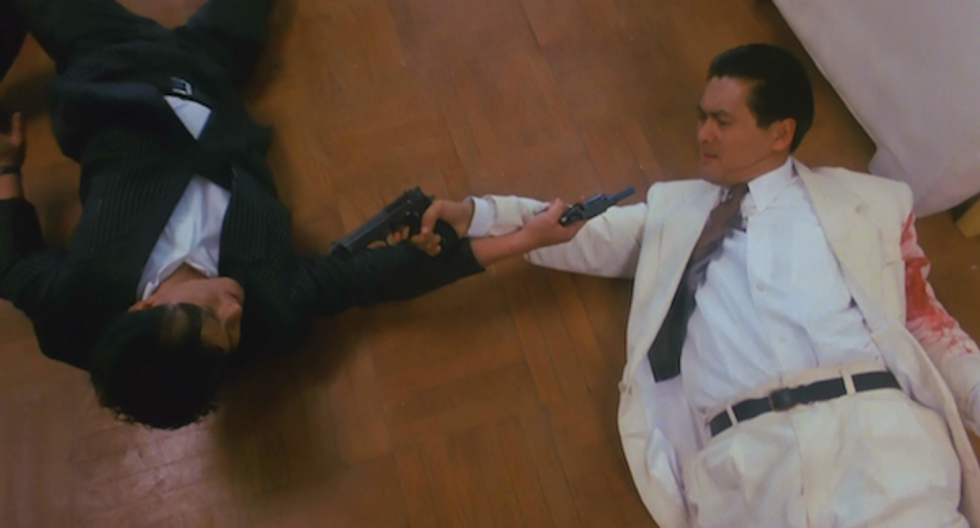 just another day at the office

It seems like every time we turn around, we are writing a post about someone who is an idiot, awful, or an awful idiot, and they shoot up a place for no reason whatsoever. We could probably just start recycling these stories and no one would even notice. Oh well. At least this most recent horrifying and utterly senseless shooting has a twist: literally everyone in it was armed to the teeth, which means ... absolutely nothing, actually, because there are still dead people who really didn't need to be dead even if everyone involved was a gun-fondling fool.

One fine day in the not-all-that-distant past, the improbably named Audy McCool brought his gun to Ye Olde McLemore Gun Fun Emporium Shoppe in beautiful (?!) Pearl River County, Mississippi. Seems Mr. McCool's weapon was in need of some repair. But when Audy and his son, a chip-off-the-old-blockhead named Michael McCool, showed up to pick up the gun, it turns out it wasn't repaired, but there was a $25 fee for we have no idea what. Do gun repair places have shop charges like auto mechanics? Let's wildly speculate and say "sure, why not?" because it's not like we're ever going to go to a gun shop and confirm or deny this.

Where were we? Oh, yeah. So the McCools were sad and mad that they might be out $25 for a not-yet-repaired gun, so they did what anyone would do: they picked a fight with the person manning the cash register. But instead of this story ending with some red-faced belligerent threats about SPEAKING TO YOUR MANAGER YESIREE, because this was a gun shop in Mississippi, our story shifts to a predictably stupid -- and predictably bloody -- end where everyone shoots everyone, basically.

The two customers -- who are also a father-son pair -- were both injured during the altercation. McLemore and his teenage son were pronounced dead at the scene.

Authorities say that Michael McCool, 29, is the alleged shooter, accused of shooting both victims using a 40-caliber pistol. However, no charges have been brought against anyone at this time.

It's neat that both these folks like to keep it all in the family so we could have hot father-and-son-killing-father-and-son action. Also, thank goodness that the McCools had at least one, but probably several, weapons that were still in commission so they could get murder-y about the still-busted gun. Quick thinking, boys.

So, two people injured, two dead, all over 25 bucks. Remind us again which one in this scenario is the Good Guy With The Gun? SPOILER ALERT: None of them.