FBI And DHS: Russian Hackers Calling From Inside The House 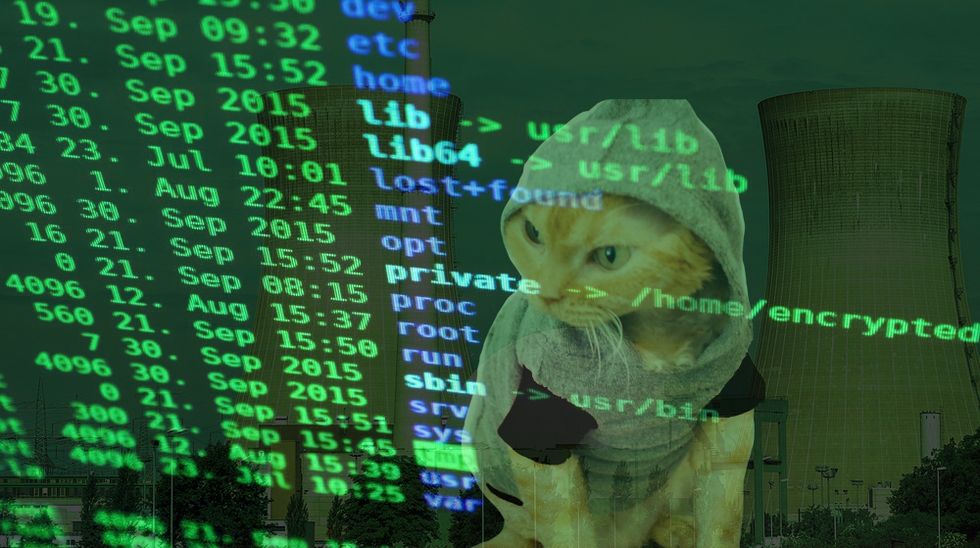 The Trump administration is accusing Russia of hacking into US and European electric grids as part its ongoing campaign of cyber fuckery. According to a joint alert by DHS and the FBI, the Russian government has been poking around "multiple organizations in the energy, nuclear, water, aviation, construction, and critical manufacturing sectors," since at least March of 2016.

In response to Uncle Sam being caught with his dick in his hand, Trump's White House begrudgingly announced new sanctions against 19 Russians, 13 of whom are were already indicted by Robert Mueller for screwing around in the 2016 election. Facing scrutiny by the press during yesterday's press briefing, Sarah Huckabee Sanders guffawed at the notion the US was doing anything to deter cyberattacks.

"[Russia's] going to have to decide whether or not they want to be a good actor or a bad actor. I think you can see from the actions that we’ve taken up until this point, we’re going to be tough on Russia until they decide to change their behavior.”

TOTALLY NORMAL NOTHING TO SEE HERE.

Trump Has First Performance Review In Oval Office With His Boss, The Russian Ambassador

The Russian AV Club will be meeting in the Oval after sixth period.

Master Deal-Maker Trump Giving Russia Back Its Spy Mansions In Exchange For 'Nothing.' Does Nothing Work For You?

Hahahahahaha oh God, he literally is shitting on Israel. Is today's GOP cool with that?

TOTALLY NORMAL NOTHING TO SEE HERE.

To be clear, this is really the only action that the Trump administration has taken to combat Russian aggression, and it amounts to some harsh language and a sad emoji. Obama issued broad sanctions against Russia for its invasion of Crimea, then kicked out Russian spies diplomats and seized some spy mansions dachas in New York and Maryland. Trump secretly invited the Russian foreign minister and ambassador to the White House, bragged about firing James Comey, and blabbed state secrets. Then he held a private meeting with Putin at the G20. What a fucking tough guy.

It's not like this is really some big mystery, or a breaking news development. Just last month NSA Director Adm. Mike Rogers told the Senate that the NSA is still waiting for Trump to tell them to do something beyond "helplessly watch every 400 lb. guy fuck up the Internet." Two days later, Trump's pick to lead US Cyber Command, Lt. Gen. Paul Nakasone, told the Senate Armed Services Committee, "We seem to be the cyber punching bag of the world," because we don't fight back.

Even Rick "DJ Oops" Perry is warning that the US isn't doing enough to combat cyber threats. Hell, Perry wants to create an Office of Cybersecurity, Energy Security and Emergency Response, in an effort to make it look like he knows what he's talking about. Yes, Rick "Green Acres" Perry actually said a smart thing.

Attacks are getting more brazen and it's only a matter of time before something catastrophic happens. In January, hackers tried to blow up a petrochemical plant in Saudi Arabia. Even if you're a luddite who still masturbates manually, you can't afford to ignore the geeks and wonks who are breathless from screaming about this stuff.

This is the nightmare scenario that cybersecurity nerds have warned about since computers began talking to each other. The fact that it happened in the US and not some "shithole" country proves that, at the very least, it's possible to seize control of critical infrastructure in a first world country. While there are a great number of scandals befalling the Trump administration, this is an openly hostile act by a foreign adversary whose intentions are to cause damage and destruction. In another era, this would be considered an act of war and force a response from NATO allies and the UN Security Council, but today we're more interested in which incompetent bastard Trump is going to "You're Fired."

Some things are worth fighting for, like cute kitten and puppy videos.

Wonkette is ad-free and brought to you by YOU.