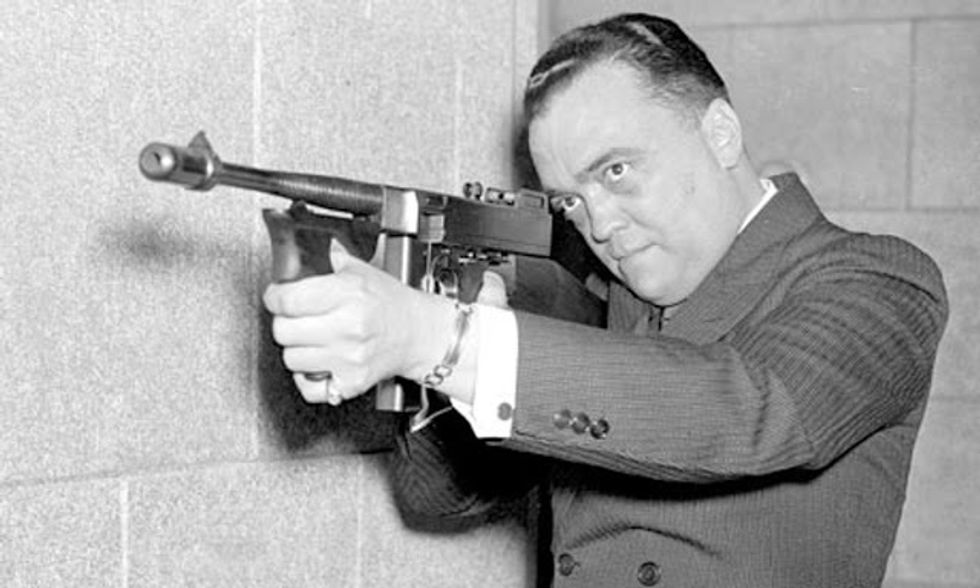 Is there a Tommy gun emoji?

The FBI is launching an investigation of an obscure, seldom-used Bureau Twitter account that suddenly, by pure coincidence, happened to start dumping a whole bunch of documents within a few days of James Comey's weirdass letter to Congress saying maybe Hillary Clinton did a thing with email, or not, who knows?

As Think Progress, notes, the Twitter account @FBIRecordsVault hadn't posted anything in over a year, and then suddenly, at 4 a.m. on October 30, it suddenly burped out a whole bunch of documents, including such innocuous stuff as the FBI's internal policy on social network use and historical oddities like Nikola Tesla's FBI file. Weirdly, the first of those mostly-routine archived documents was a tweet describing Donald Trump's dead racist daddy as "a real estate developer and philanthropist" -- or perhaps a simple slumlord:

Following the blurt of documents on October 30, the account sat a while in uffish thought, then on November 1 belched out one last file (in the popular WTF format), almost as an afterthought: the FBI's files on Bill Clinton's pardon of Marc Rich, in which investigators found no wrongdoing, but look! Clinton Foundation!!!!!

Well that's a hell of a sandwich, innit? The account has since gone silent again, though Crom knows at some point it may suddenly rumble and say enigmatically, "Forty-Two."

The internal investigation was spurred by a complaint from a former investigative reporter, Jonathan Hutson, although beyond telling ThinkProgress the matter would be investigated by the FBI’s Inspection Division and then referred back to its Office of Professional Responsibility for “adjudication,” Candice Will, the assistant director of the Office of Professional Responsibility, didn't offer any details on what the investigation would entail. Maybe more dick pics of Anthony Weiner, or proof that Hillary Clinton really is in telepathic contact with Occupants of Interplanetary Craft.

ThinkProgress does note, drily, that the news of the internal investigation is at odds with a statement the Bureau issued on the Marc Rich document dump, which insisted

The FBI's Records Management Division receives thousands of FOIA requests annually which are processed on a first in, first out (FIFO) basis. By law, FOIA materials that have been requested three or more times are posted electronically to the FBI’s public reading room shortly after they are processed. Per the standard procedure for FOIA, these materials became available for release and were posted automatically and electronically to the FBI’s public reading room in accordance with the law and established procedures.

So the official word is that the Twitter account just happened to burp out a whole bunch of stuff that was FOIA'd by ordinary citizens, and the detail that it all came out while the FBI director's judgment is being, ahem, questioned is all just a coincidence. AND the FBI is investigating how that routine release of first-in, first-out documents just happened to include stuff that would remind people of a Clinton "scandal."

A heavily-accented spokesperson for the Bureau, Pladimir Vutin, told Yr Wonkette the investigation "is routine, pure routine, no problem. You stop worrying about this now, OK? So nosy. You should get nice hobby, da? Go make America great again."