Fear And Loving In New Hampshire: Your Wonkebago Primary Wrap-Up! 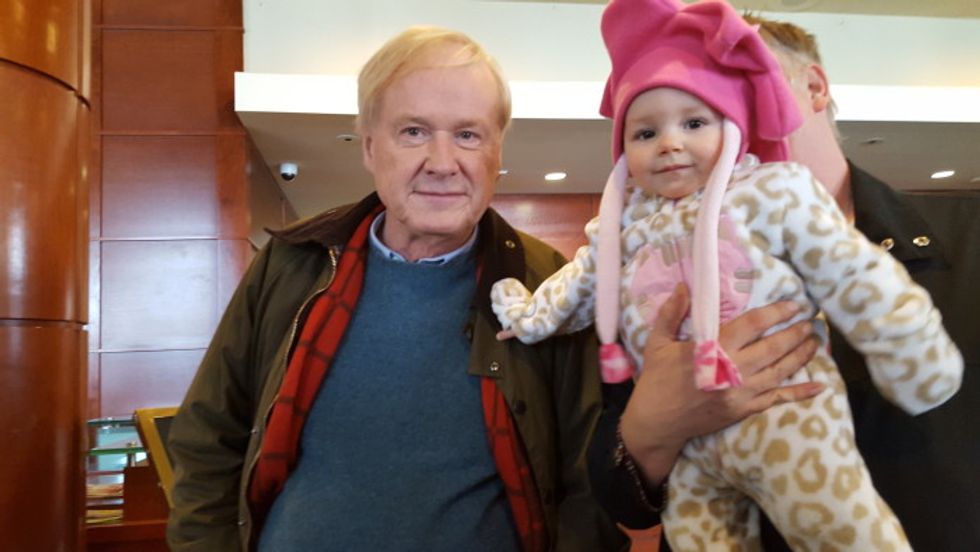 It was supposed to be eight hours from our Pennsylvania rest stop to Nashua, New Hampshire. But 13 hours later, we were still driving, looping around looking for a freeway that wouldn't lop the top off our Wonkebago. We had planned ... poorly, and with little propane left and no conceivable place to plug our housecar into any sort of electricity, we risked turning our heiress into the world's cutest block of dead baby ice. I started looking through my emails for random Wonkers who had offered us a driveway or an electrical outlet. It was smack in the middle of the Super Bowl. I found one, in Gloucester, Massachusetts, at the very edge of the world. It included a picture. Which looked like this.

Mightn't it be worth an extra hour and a half the wrong direction to find an electric cord there, at whatever that magnificent spot was, and not turn our baby into freezypops? Yes. Soon enough we'd be meeting our next newest friends.

Our stop was more than just the edge of the world, though. Once there and properly greeted, we learned we were guests of the Ocean Alliance, about whom our Doktor Zoom had apparently written. The old way of studying whales had involved chasing them down with boats and then harpooning off bits of whaleflesh to study their health and DNA. That, as you'd imagine, was a stressor for the seabeasts. So the Ocean Alliance invented a drone that would hover above a whale and catch its sputum as it erupted from its blowhole. The Snotbot was born. These are the kinds of people we are meeting on our travels, because apparently we got karma by her balls. We had a drink with Jim, who told charming stories of the tiny seaside city of Gloucester -- the wry punch line for each of which was "The fish aren't coming back, Ma!" In the morning, Dr. Iain Kerr would board the SS Wonkebago and tell us we were cordially welcome to come and park there anytime -- no need to call first, just drive up and plug in.

We left for New Hampshire ahead of the foot of snow that would keep us from leaving the Ocean Alliance at Rocky Point -- although I didn't think being snowed in there (with propane) would be the worst possible outcome.

And it felt like it too. But we made our way to our destination, Shaskeen's Pub, where my buddy Chris Faraone, last seen forcing me to accidentally eat acid at the DNC by asking me one too many times if I would care to eat some acid, had set up an independent media filing center in the bar. A young man -- Millennial, typical Berner, looked like Che -- told me Hillary Clinton has a way of making people disappear when they disagree with her. Hillary Clinton, you STOP THAT MURDERING RIGHT NOW!

There, now she has been mommed.

At Shaskeen's, Bob and Geri -- a retired couple from Louisiana who couldn't think of a funner vacation than coming to New Hampshire in February to yell at Republicans -- told us the real action was at the Radisson, where all the big boy journalists were staying, and from which MSNBC was broadcasting ... from the bar! We thought about heading to the Trump rally that night, but I was scared. And there'd be a line. And it was cold out. And we'd driven all the hours the night before. And Trump fans are Nazis. And did I mention? I was scared. So by 6 p.m. we made our way to the Walmart parking lot where we'd get a poor night's sleep. There, I read the Twitter, one journalist after another letting me know about Trump calling Ted Cruz a pussy. Now if he'd called Barbara Bush a cunt, I would have sent him one HUNDRED American moneys.

Next to us, two New Hampsters in riceburners played Fast and Furious, doing donuts in the fresh Walmart snow. If they smacked into the housecar, boy were they going to get a momming from me!

In the morning, we went to the Radisson. Maybe we would see Rachel Maddow! Maybe we would see ... someone! I saw only Mark Penn, and why he's showing his face in public within fifty miles of a political event, I have no idea. Except that Politico says Bill Clinton is still taking his calls, and his advice, and JESUS HILLARY PUT A LEASH ON YOUR HUSBAND! You might as well put Dick Morris on the payroll again!

Okay, I knew this guy.

Soon people were letting us know: Morning Joe's Mika wants babies to steal! She is putting them right up on the stage! Hmmm, I have a baby! She is RIGHT HERE! And that's how we ended up lurking in the Radisson for a good six hours, doing nothing, just waiting there to try to get our child on Joe Scarborough's lap.

Pregnancy does something to your brain. It is a bad thing. But here were some people to whom I was not ashamed to introduce my daughter:

That was David Corn, of Mother Jones.

But David Corn and Charles P. Pierce were not enough for my hungering starfucking and stagemomming. We put the baby on my husband's head, where Mika would see her. We whored her. WE WHORED HER. We would not stop until they made our baby A STAH.

And they did, and they were gracious and nice -- most Republicans are not actually monsters, Sean Hannity and Ted Cruz of course excepted -- and the baby was so good, as she always always always is. "This is the Official Wonkette Baby," we said by way of introduction. It was pretty clear they had no idea what that meant.

Afterwards, I felt seasick. Not only had I turned my daughter out like she was Honey Boo Boo, but I was also jealous -- of my own daughter -- that she had made her debut on the pundit circuit before me. She is eight months old! I have been doing dick jokes about politics for TWENTY-ONE YEARS. Only one of us can actually say words with her mouth, and it's not the baby! WHY HAD I SAT IN THE RADISSON ALL FUCKING DAY TO SIT MY DAUGHTER ON MORNING JOE? I DON'T EVEN WATCH DAYTIME TV!

My mother was tart: they had introduced Donna Rose as a Bernie Baby, but from "a divided household." And why wasn't she 100 percent Bernie Baby, my mom wanted to know? My aunt emailed me, meanwhile, that she couldn't believe I'd let Mika touch her, when Mika "said Bernie supporters aren't hypocrites." I was getting it from every side, and I deserved it -- not for our "divided household," since it's a UNITED DEMOCRATIC HOUSEHOLD OF UNITY, or for some imaginary anti-Hillary slur, but for having cared so much about the hypnotic glow of the teevee lights.

I was disgusting. I was ashamed.

We drove into the night, to the Bernie Sanders party in Concord. It was tickets only, and "press [was] full." A girl had been waiting in the cold for three hours. She was crying. They would not let her in. We turned around and found the Hillary Clinton party, at Southern New Hampshire University. There was no such thing as a parking space there, only signs with arrows pointing right to "event parking," where the right turn was blocked off by sawhorses. They kept the signs up though. I guess just to make us mad.

GODDAMMIT, if neither Hillary nor Bernie could figure out how to secure a large enough space for their supporters -- if they couldn't administer a fucking ELECTION NIGHT PARTY out of a paper bag -- I am going to have no choice but to vote for fascist old Trump. He'll make the parties run on time!

We were skunked. We hadn't eaten since breakfast. I knew if we didn't make a decision soon, we'd end up driving in hazy loops again for 13 hours. I didn't care much for the Walmart parking lot. Darling, how do you feel about going back to Gloucester?

An hour later, we were home to our whale friends. We'd plugged in. We even had propane. We would be warm and snuggly and sheltered and fed. As always, God and the Wonkers provide.

in Charlotte, eventually, and in Charleston, and Memphis. We are never ever ever getting home.