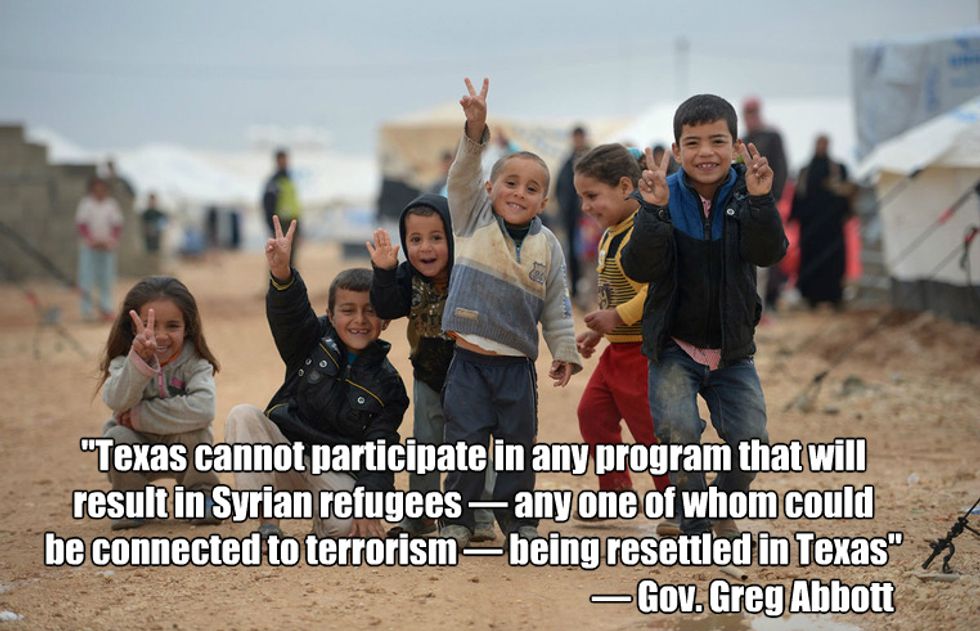 Despite all the kicking and screaming by Republican governors following the Paris terror attacks, it turns out they really can't stop Syrian refugees from being resettled in their states, no matter how much they pout. Even though Texas Gov. Greg Abbott tried his very best to be the biggest douche possible to refugees, a federal judge was completely unsympathetic to Texas's attempt to set its very own immigration policy, and threw out a Texas lawsuit trying to prevent the Obama administration from resettling Syrian refugees in the One Star State. Turns out the silly old Constitution is really clear about the federal government having control over immigration, no matter how hard Republican governors soil their pants in fear of Muslim toddlers fleeing a war zone.

Texas Attorney General Ken Paxton filed the lawsuit in December on behalf of the Texas Health and Human Services Commission. It had met with an icy reception from U.S. District Court Judge David Godbey, who previously had denied Texas’ request for an immediate halt to the refugee resettlement plans and its later request for a preliminary injunction stopping resettlement [...]

On Wednesday, in a filing added to the court’s docket on Thursday, Godbey dismissed the case against the Obama administration and a nonprofit organization that works on resettling refugees.

Dang, is this Godbey one of those radical Mexican Muslim communists appointed to the federal bench by Barack HUSSEIN Obama? Not so much -- he was appointed by infamous terrorist sympathizer George W. Bush. He dismissed the suit in response to motions filed by the Obama administration and by the resettlement agency, the International Rescue Committee (IRC), which contracts with Texas for refugee resettlement services.

Godbey ruled that the HHSC had failed to “state a plausible claim for relief” or even show it had standing to challenge the federal government’s ability to resettle refugees.

[wonkbar]<a href="http://wonkette.com/596726/syria-to-invade-texas-this-week-bye-texas"></a>[/wonkbar]The judge also wasn't impressed by Texas's claim that the IRC was actually the one breaking its contractual commitment by resettling refugees without notifying state officials of their nationality. BOGUS, said Godbey:

Texas argued the Refugee Act required the IRC to provide “close cooperation and advance consultation.” But that language is best read as advisory, Godbey wrote, contrasting its vague urgings with more explicit commands elsewhere in the Act.

[wonkbar]<a href="http://wonkette.com/599208/mean-federal-judge-orders-indiana-governor-to-kiss-all-the-syrian-refugees-on-the-mouth"></a>[/wonkbar]This is at least the second court loss for Republican governors trying to save their states from scary refugees who have not only escaped the hell of a civil war but then made it through a two-year gauntlet of security screenings by the U.S. government. In March, another federal judge told Indiana Gov. Mike Pence to get bent, because as we may have mentioned a few hundred times, governors actually do not set immigration or refugee policy, and they can no more keep Syrian refugees from being resettled by the federal government than, say, California can refuse to allow Idahoans to move to Fresno. Not that any Idahoans have yet applied for asylum in California.

Neither judge found it necessary to point out that the Syrian refugees are in such desperate straits that they're even willing to be resettled in Indiana or Texas.