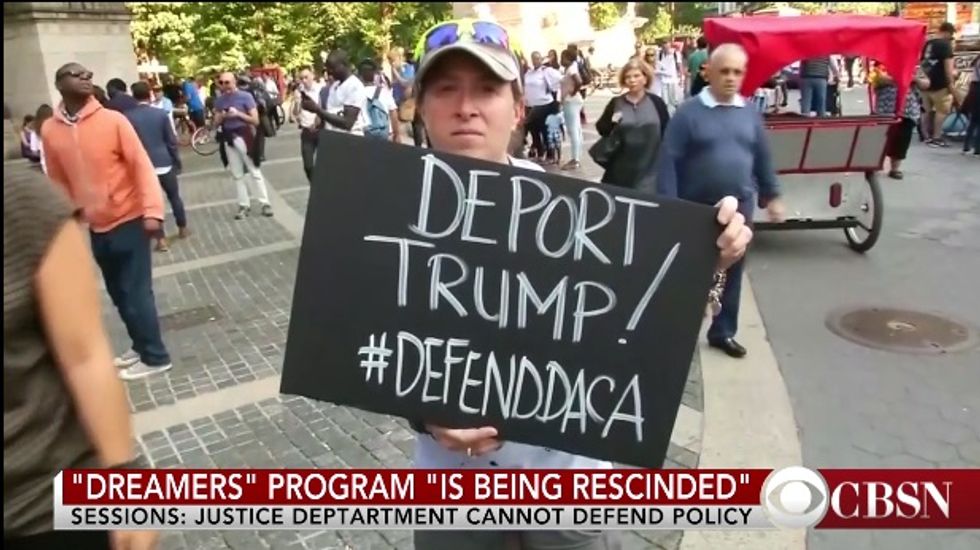 Talk about a dream...

Hours after Donald Trump took the principled stand that he will sign whatever Congress sends him on the matter, a federal judge in San Francisco ruled Tuesday night that the administration can't dismantle Barack Obama's Deferred Action for Childhood Arrivals (DACA) program just yet. US District Judge William Alsup issued a nationwide injunction ordering the administration to renew DACA protections for anyone who was covered by DACA at the time of Trump's order in September, until a lawsuit by California A.G. Xavier Becerra and several other state attorneys general, DACA recipients, the University of California, and other plaintiffs is resolved.

The order doesn't resolve the DACA problem that Trump created for himself and 700,000 undocumented young people brought to the US when they were children, but it keeps the administration from arbitrarily deporting anyone until the lawsuit plays out in court -- by which time Congress may actually pass a permanent fix to protect DREAMers.

Judge Alsup's ruling ripped the Trump administration's flimsy justification for rescinding DACA. Attorney General Jeff Sessions (vomit) claimed President Obama lacked the legal authority to defer enforcement actions against the people covered by DACA, but in several pages of law talking stuff, Alsup notes the many legal precedents for the executive setting enforcement priorities for any number of reasons, going back as far as 1975, including "humanitarian reasons or simply for [the Executive’s] own convenience.” Obama's DACA program, he said, has roots in discretionary relief programs going back even farther, such as the Eisenhower administration's decision to allow the entry of foreign-born orphans adopted by Americans but barred from entry by then-existing immigration quotas. Ronald Reagan and George H.W. Bush also took executive actions to allow other technically "illegal" immigrants to be exempt from deportation.

The New York Times points out that Alsup even cites Donald Trump's own tweets in favor of granting DACA recipients permanent protection:

He noted that in September, the president wrote: “Does anybody really want to throw out good, educated and accomplished young people who have jobs, some serving in the military? Really!” Such tweets, the judge said, bolstered the idea that keeping the program going was in the public’s interest.

That would be in opposition to Trump's campaign rally declarations that DACA was just a ruse to protect illegal immigrants and promote open borders, of course, because Donald Trump will say whatever he thinks will make people like him.

As we like to say, go read the whole thing -- it's a remarkably clear summary of how, for decades, presidents have had the authority to set immigration enforcement priorities and provide relief to some classes of immigrants, yes, even nasty undocumented immigrants. Barack Obama didn't just make up DACA out of his head, but Alsup makes a pretty clear case that Sessions and Co. manufactured their rationale for rescinding DACA out of very thin legal arguments. New York magazine has an excellent roundup of the case if you're not into reading legal documents (you really should, though).

Alsup's order called the cancellation of DACA "arbitrary, capricious, an abuse of discretion, or not otherwise in accordance with law" and held that DACA recipients would be irreparably harmed if they were made subject to deportation before a final ruling in the legal challenge to rescinding DACA. He ordered that DHS must issue DACA renewals to anyone covered by the program in September, but the department isn't required to consider new applications from people who hadn't previously been protected by DACA. This means that tens of thousands of people can apply for DACA renewal past the administration's arbitrary cut-off of renewals for those whose permits expire as of March 5.

Donald Trump, of course, has Thoughts on Alsup's decision: Our courts are terrible and we should do something about that, because Donald Trump isn't getting his way:

Oh, those sneaky plaintiffs from California, jurisdiction shopping by going to the federal court that covers California!

Speaking of sneaky, we should also note that the official White House "transcript" of Trump's meeting yesterday with members of Congress conveniently left out the moment where Trump seemed to agree with Senator Dianne Feinstein on passing a clean DACA bill before addressing other matters. The Washington Post reported yesterday that the transcript did not include Trump's reply to Feinstein, "Yeah, I would like to do it." A White House official explained any missing lines from the transcript was "unintentional." The line has now been added to the transcript. Looks like Donald Trump's brain isn't the only one with a Memory Hole.

The administration will almost certainly fight the order all the way to the Supreme Court so it can start deporting the first wave of DACA recipients -- very lovingly, you know, it just tears Donald Trump up to see this happen, but he has no choice. But for the moment at least, DACA recipients have a little more breathing room than they did yesterday.