Find Yourself A Man Who Looks At You The Way Jerry Falwell Jr. Looks At His Personal Trainer. ALLEGEDLY.

Jerry Falwell Jr. is a man of God. But he's also a man of wealth and taste who likes to travel in style and take very good care of his friends.

Friends, meet Benjamin Crosswhite, Jerry Falwell Jr.'s personal trainer who some sort of way wound up getting a $2 million dollar athletic club from Liberty University for a whopping zero dollars. Not to be confused with Giancarlo Granda, the handsome poolboy Jerry Falwell and his wife Becki befriended in Miami and set up in the hotel business. That guy was brunette! Ben is a totally different hot, white dude, who graduated from Liberty University in 2011 and stuck around Lynchburg, Virginia, to be the Falwells' personal trainer. Plus, he's blond.

Sorry, ladies and gents, he's happily hetero-married to a pretty lady who's usually home to help him make the low-carb chicken. In fact, the existence of said lovely wife was the very first thing he mentioned when Reuters came knocking with all their nosy questions about how he came to own the 18-acre Crosswhite Fitness club, a Christian gym that serves up Bible verses with the barbells.

"All I will say is that my wife and I consult each other before every major business deal and we bought the complex from Liberty together," Crosswhite told Reuters in an email. "My wife and I both work around the clock to make our business succeed."

That's what Jerry Falwell loves about his young friend. He's not "pushing too hard and insisting on radical and instant changes in lifestyle." He's gentle with Jerry, and just lets him #BeBest, whatever "lifestyle" he chooses, you know? (We mean fitness lifestyle, you pervs!) That's why Falwell took Crosswhite on his private jet to Miami in 2012 for his annual physical, because he needed the full-service trainer "to explain to the doctors Mr. Falwell's diet and exercise program and help document the results." 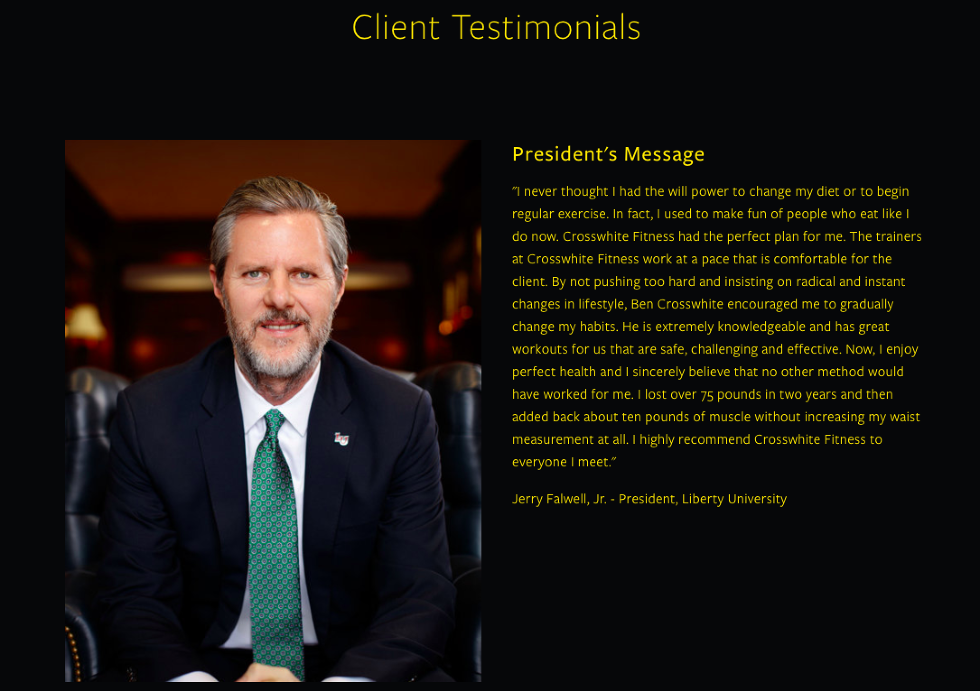 That's just the kind of service Ben Crosswhite provides to his clients. At Crosswhite's gym, you'll learn to take charge of your body, and the bodies of all the women in America as well.

But Ben isn't just a misogynistic beefcake -- he's got a head for figures, too. Which is why Falwell emailed his staff in 2013 and told them to cut his 25-year-old trainer a "sweet deal" to lease the gym in the 18-acre athletic facility, which had recently been donated by a trustee to Liberty University. And because "Becki and I wouldn't mind working out over there with Ben as a trainer because it is more private," Crosswhite wound up paying just $2,300 per month to rent the space.

But then in 2016, the deal got even sweeter. Liberty agreed to sell the entire property to Crosswhite for $1.2 million, but they'd credit him in advance for ten years worth of fees for Liberty's tennis team to use the club's five indoor tennis courts, which knocked $615,000 off the purchase price. That left $580,000, which Liberty was happy to lend him at a 3 percent interest rate. That's substantially lower than your average borrower with little to no commercial credit history and zero collateral might get from a traditional lender, but Liberty has a perfectly good explanation for that.

Liberty had received the athletic center as a gift in 2011 from a trustee who has since died, but it quickly became a "drain on university resources," the statement said. Crosswhite had been leasing gym space at the property since 2013, and was thus "the most viable purchaser." Liberty said it adjusted the price and financed Crosswhite's purchase because its tennis team would continue to use the courts.

See, the school had to cut him that "sweet deal," because only a 25-year-old with rock-hard abs has the smarts to operate a facility like that at a profit. So obviously Jerry Falwell did not breach his fiduciary duty to the school, which is a non-profit institution directly subsidized by federal tax dollars through federally backed student loans. This was a sound financial decision to let his handsome personal trainer buy a charitable asset -- for which the donor undoubtedly got a seven-figure tax deduction -- for zero cash out of pocket.

Similarly, it was just good business sense to loan Crosswhite a further $75,000 the following year to repair the roof over the tennis courts. Some Liberty employees considered making him front the cash himself, as specified in the loan documents. But then Liberty's general counsel David Corry reminded everyone in an email that "Ben Crosswhite enjoys a close working relationship with several LU administrators, including the President," so they might find themselves "second guessed" and, worse yet, crosswise with Jerry if they tried to get the guy to pony up.

Anyway, God helps those who help themselves, so it all worked out great for everyone. In 2018, Crosswhite got a $2.05 million line of credit through a local bank and paid Liberty back the outstanding $576,000 balance on his loan. Liberty told Reuters that "the credit line amount was linked to the property's future value after Crosswhite builds a swimming pool there." Even Ben's dog can understand that math!

Okay, look. We have no idea what Jerry Falwell's deal is with all these hot young guys. People on Twitter have thoughts.

Which is hilarious, but ultimately WHO FUCKING CARES! What's really offensive is people like Falwell, who are fighting like hell to cut taxes and decimate the social safety net, who hold themselves out as bastions of righteousness and family values, who pretend that anything is possible if you just work hard enough, who tell poor people they just need to pull up their pants and bootstrap themselves out of poverty. And all the while they're running fantastic scams like this one, which uses donated assets for which the donor took a charitable deduction and federally subsidized tuition dollars -- i.e. paid by you, the American taxpayer -- to enrich themselves and their friends.

Makes you long for the good old days, back in the outhouse with Jerry's Pappy and his Grandmammy. We were so young and innocent then.

Please click here to fund your Wonkette, who has had it up to here with these nasty hypocrites. And it's only Wednesday!