Fine, Here Is Your Bernie Sanders On SNL Already. Are You People Happy Now? 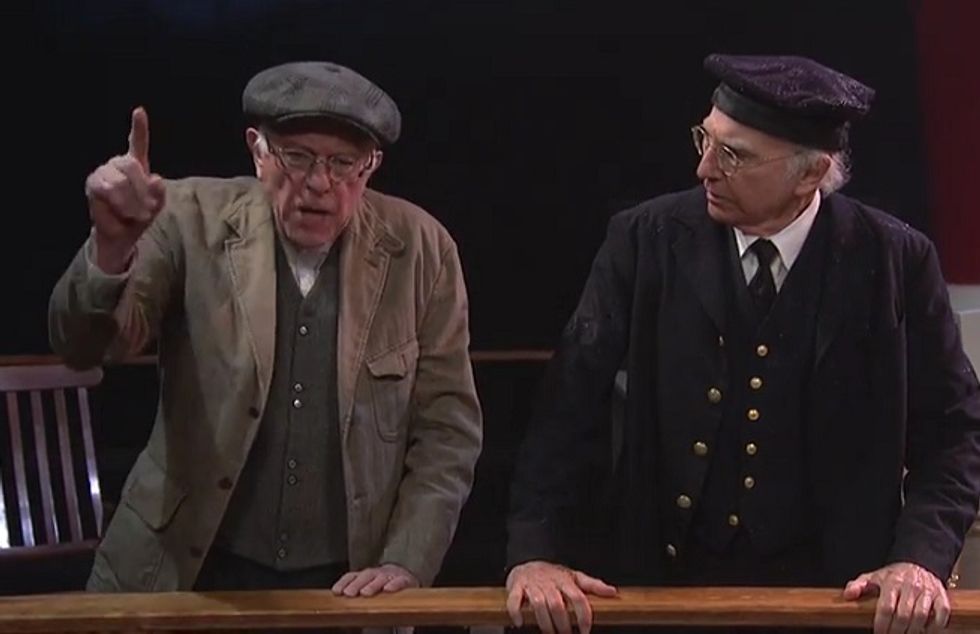 My Bern Will Go On

As everyone knows, there are two objectives for any political candidate appearing on Saturday Night Live: Get your face on SNL, and do it without embarrassing yourself too badly. And don't even try to match the performance of Jesse Jackson when he was on the show in 1984, because nothing will ever match his reading of Green Eggs and Ham (or the game show "The Question Is Moot"). As long as a candidate gets through the exercise without falling flat on their face, it's a success, and it proves they're a "good sport." And so we were all waiting patiently for Bernie Sanders in his much-hyped appearance on the February 6 edition of the show, hosted by Larry David, who does Bernie Sanders alarmingly well.

So how did he do? Ehh, he was OK! Would have been nice if they'd given him better material to work with, but he was nice and Bernieish in this Titanic-based sketch where Rich Guy Larry David insists on a place in the lifeboat, then Bernie, as an immigrant from steerage, comes to the railing and starts railing about the advantages given to the One Percent:

When Bernie says everyone needs to pull together to get through the disaster, David says "Sounds like socialism to me," and Bernie quickly corrects him: "Democratic socialism! ... YOOGE difference!" And there's a cute bit where he says his name is "Bernie Sanderswitzky, but we're gonna change it when we get to America so it doesn't sound quite so Jewish."

Bernie got through it just fine, even though the sketch didn't give him the chance to meet SNL's version of "Bernie Sanders" the way Hillary Clinton did when she appeared on the show as "Val the Bartender" serving drinks to Kate McKinnnon's "Hillary Clinton" back in October:

That one took on Hillary's late arrival on the Keystone pipeline and marriage equality. It would have been nice to see a similarly-paced sketch with more of Bernie, but maybe he drew the line at singing.

Or maybe he was worried that he couldn't match Larry David's version of him in this "Bern Your Enthusiasm" sketch which gives us Larry/Bernie as a candidate who's just irritating enough to alienate the few voters who could have won Iowa for him:

Bernie Sanders should definitely look into bringing Jeff Garlin and Susie Essman on to his campaign.

Finally, for comparison purposes, and because we never get tired of it, here's that fine old Jesse Jackson bit from 1984. Enjoy!