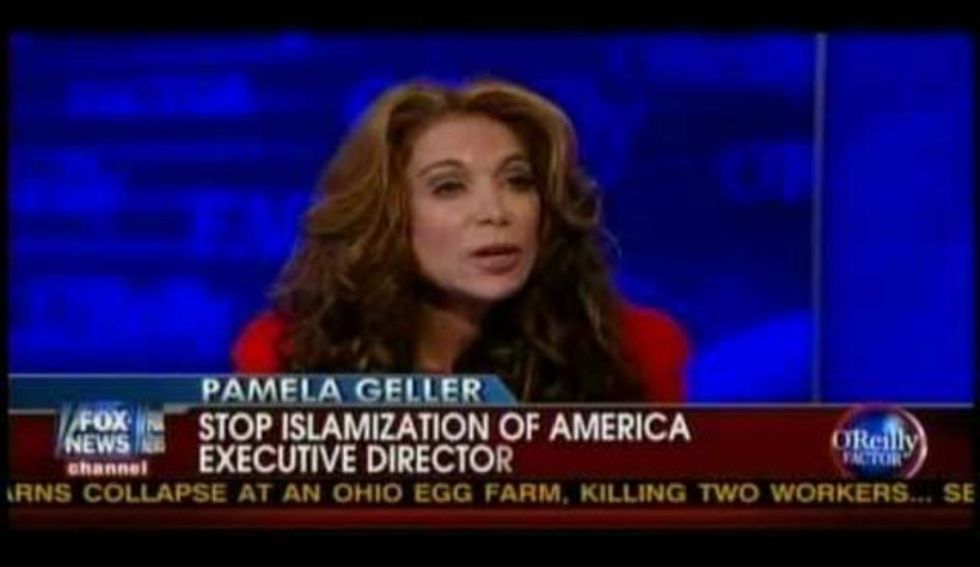 A bunch of anti-Muslim extremists in Texas were attacked by a couple of Muslim extremists yesterday, proving that America needs to take much more extreme measures to protect itself from Muslim extremists. In the Dallas suburb of Garland, Texas, the charming folks of the "American Freedom Defense Initiative," Pam Geller's happy band of Islamophobes, were holding a widely publicized contest to find the bestest possible cartoon of the prophet Mohammed -- a $10,000 prize to the cartoon that best captured what Islamophobes think is funny -- when two men drove up and shot an unarmed security guard in the ankle; Garland police officers returned fire, killing the attackers immediately.

Needless to say, Geller responded with the calm and poise that you'd expect, issuing a statement explaining exactly why Freedom and Liberty are at risk:

Yr Wonkette is definitely against anyone being shot for drawing rude cartoons of religious figures, although we are also not entirely certain that drawings like this -- the winning entry by Bosch Fawstin -- exactly fill us with the spirit of liberty, either:

We like the little Hitler mustache, because it's Symbolic.

In addition to the $10,000 top prize, Fawstin won a $2500 prize for the most popular cartoon, as chosen by the discerning readers of Dead Breitbart's Home For Unquenchable Paranoid Rage. We bet the comments on that post are a doozy.

The keynote speaker at the conference was Dutch rightwing politician and Liberty Hero Geert Wilders, who demonstrated his commitment to Free Speech in 2007 by calling for the Koran to be banned, because it is just like Mein Kampf. For instance, just look at the mustache on that picture of the author! Wilders has also helped to promote Freedom right here in U.S. America, inspiring a Colorado wingnut's call to ban mosques because they are not churches, not at all.

One of the shooters has been identified as Elton Simpson, from Phoenix, Arizona; Simpson was convicted in 2011 of making false statements to the FBI in an investigation of his attempts to travel to Somalia and maybe become a jihadist, although the judge in that case found that there was "insufficient evidence to support that the false statement 'involved' international terrorism," and Simpson received three years on probation. The other person killed yesterday is believed to be Simpson's roommate, but hasn't yet been identified further.

On Twitter, reaction to the shootings has generally been celebratory; Award-Winning Journalist and walking underpants stain Chuck C. Johnson had this brilliant observation:

Other tweets proudly explained how the Second Amendment kept the Garland shooting from turning into a repeat of the Charlie Hebdo attacks, because this is Texas, not France, and an armed citizenry is what keeps us free, which maybe overlooks the small detail that the attackers were shot by police, not random gun-humpers who happened along, and that the event organizers paid $10,000 for additional security precisely because the event was expected to attract protests.

As it turns out, there weren't any protests -- the executive director of the Council on American-Islamic Relations Dallas-Fort Worth, Alia Salem, had called on area Muslims to ignore the event altogether. And while CAIR has issued a condemnation of the attack, we learn from the good folks at JihadWatch that mere condemnation ain't enough:

Needless to say, when deranged Muslim extremists shoot people, it's All Other Muslims' fault for not stopping them in advance. When rightwing loonies decide to shoot people, they're lone wolves who do not reflect the peaceful commitment to freedom and self-defense of the far right. This is just logic.

As of press time, Yr Wonkette has not yet determined how the Texas shootings have victimized Sarah Palin, but we're fairly certain she'll let us know soon.