Florida Is Completely F*cked, The Legislative Edition! Your Florida Roundup. 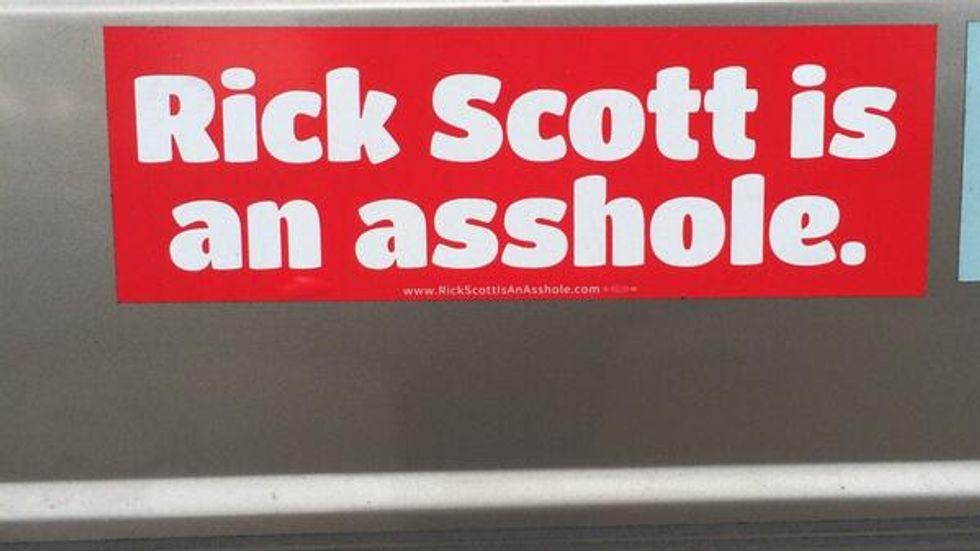 Florida [flawr-i-duh], noun: 1) A callous, avaricious swampland of greed and dumb run by bible-thumpers and hucksters the state’s residents aren't smart enough to vote out of office, no matter how badly they fuck them over.

Florida's Legislature collapsed into chaos Tuesday as the House unilaterally ended the annual session with more than three days left, leaving dozens of major bills dead and escalating tensions between the House and Senate over their health care stalemate.

By way of background for those of you fortunate enough to be ignorant of this wheezing clown parade: The state Senate mostly comprises your Chamber Republicans, the corporate shills always on the hunt for some new industry to blow, of course, but also more prone to engage in rational thought on occasion. The state House, on the other hand, is a cancerous, cantankerous, petulant shitshow of MORANS and Jesus freaks and trickle-down true believers, the guys who jerk off to pictures of St. Ronnie in drag and can’t find an environmental regulation or vagina-having Floridian or poor person they don’t want to fuck over.

At issue this week is the decision to accept the BILLIONS OF FREE DOLLARS THE FEDERAL GOVERNMENT IS OFFERING US TO HELP POOR PEOPLE GET HEALTH CARE, which to anyone with a triple-digit IQ seems a no-brainer of the first order. Unfortunately, there are very few Floridians with triple-digit IQs, and almost none of them are in the state House. So while the Senate has done the bidding of the Chamber of Commerce and the state’s major hospitals, who are like, whoa dudes, we’re going to miss out on SO MUCH FREE MONEY and that would not be S-M-R-T, the House is in the corner screaming about Obamacare and FREEDOM!

The Senate passed a budget — worth noting, this is the ONE THING the state constitution requires the legislature to do every year — that included Medicaid expansion. The state House said fuck that, took its ball and went home early.

At the heart of the dispute is the question of whether to expand Medicaid to draw down federal money to provide health care for 850,000 uninsured residents who must otherwise rely on charity care. The federal government is phasing out a program to reimburse hospitals that provide care for low-income or indigent patients, known as the Low Income Pool, or LIP, as it shifts to new programs provided by the Affordable Care Act, or Obamacare.

As part of the budget negotiations, the Senate wants to expand Medicaid and impose new requirements on low-income residents as it phases out LIP funds. The House rejects that idea, arguing that Medicaid is a "broken" program and prefers instead to rely on the federal LIP funds — at least for another year.

The governor, who has sided with the House on the Medicaid debate and called individual senators to his office last week to threaten vetoes of their priorities if he didn't get his tax cut bill, had little to say Tuesday.

The House's decision to leave three days early — the period in which state legislatures vote on BASICALLY EVERYTHING — did more than just roger the poors out of health care. Indeed, they left a LOT on their desks, like "bills that would have rewritten the state's water policy, decided how to spend money from the Amendment 1 environmental measure, increased economic and educational options for people with special needs, reformed the state prison system, revised ethics rules at the Public Service Commission and provided financial benefits to charter schools."

Now they get to come back for a taxpayer-funded special session, which we’re certain will be very productive!

If you're still not sure that Republicans in the state House are a cesspool of racism and stupidity, meet one of their most powerful members, Rep. Matt Gaetz. See, after the House Republicans said GAME OVER and headed out of town, some Democrats filed a lawsuit to ask a court to force them to come back and, you know, do their fucking jobs like grown ups.

The legal claim’s verbiage was not up to Gaetz’s English-lit-professor standards:

"This lawsuit reads like it was researched and drafted by Sen. Joyner … and spell-checked by Sen. Bullard," Rep. Matt Gaetz tweeted. Sen. Dwight Bullard, D-Cutler Bay, was among senators involved in the case. Both Joyner and Bullard are black.

Get it? The lawsuit was written by Dumb Negroes who can’t spell! Gaetz is so hi-larious, but he is most def not racist.

"I'm sure liberal members of the Senate would rather talk about a Tweet than about forcing Obamacare on Florida," Matt Gaetz added to the Twitter onslaught.

But hours later even [House Speaker Steve] Crisafulli joined the ranks of those disavowing the Tweet: "I don't condone the Tweet by @MattGaetz. He is an agitator, yes, but not a racist. Please accept my apology to those offended."

The Supreme Court, by the way, declined to order lawmakers back into session, but justices did rule that the House had violated the state constitution. So they broke the law, and got what they wanted anyway. It’s the Republican way!

Okay, fine. Back to our regularly scheduled dose of Florida stupidity, for you to laugh at while our state rots from the inside. Here’s Mila Dago, with her kinda-hot mugshot (see above), who was going through a breakup with her boyfriend, got faced, sent him a text message that said, "Driving drunk woo ... I'll be dead thanks to you," and then promptly crashed her car and killed her passenger.

And here’s Austin Hatfield, who was bitten in the face by a water moccasin HE WAS FUCKING PETTING:

The bite happened last Saturday, according to investigators with Florida Fish and Wildlife, two days after Austin Hatfield, 18, captured it in his girlfriend's yard in Wimauma.

One of Hatfield's friends, Jason Belcher, was there when it happened. Belcher said the snake was initially in a pillow case.

"He took it out, put it on his chest and it was acting funny, and it jumped up and got him," he said.

Not sure which is worse.

And here’s this dude:

If you can’t tell from the video, that's a methed-up Florida Man surfing on the roof of a stranger’s car:

Jonathan Restrepo, of Coral Springs, allegedly leaped out of his girlfriend's car in the middle of traffic in Manalapan and jumped onto several cars -- including a moving convertible, reports WESH NBC News-2 in Orlando.

One terrified woman kept driving with Restrepo on her roof, authorities say.

That is not the end of the story either:

Eventually, as seen in the video, Lantana and Manalapan police arrive coming the other way on A1A and Restrepo jumps off the car and bolts for a grassy area by the Intracoastal Waterway.

"When he went to run away from the cops, he didn't even run away from them," the man who recorded the video said. "He ran a few feet and then ran back at them. He was really confused, just acting crazy. I've never seen anything like it."

John Timiriasieff, 56, underwent surgery to amputate his leg. This is not unusual in Florida, given our preponderance of old people and diabetes. Some time later, the cops started calling on his family, asking if he’d been Dextered. (Dexter was set in Florida, a fact we were proud of for roughly the first two seasons.) See, instead of the normal process of incinerating a no-longer-needed limb, the fine folks at Doctors Hospital took the quicker path and tossed it in the trash, Timiriasieff’s info still tagged on it. The leg wound up in a landfill, and eventually someone was saw it and was like, that’s not right. So they called the cops, who dispatched some homicide detectives to check it out, and now Timiriasieff is suing. Of course.

Corruption and Irony and Frat Boys, Oh My!

At the University of Central Florida’s (hey, we went there!) Nicholson School of Communication, there was a director named Dr. Robert Chandler, who also happens to be the author of an ethics textbook. You can guess where this is going:

A University of Central Florida director and author of an ethics textbook has resigned after accusations of misusing funds and university resources, according to documents obtained by KnightNews.com.

Dr. Robert Chandler, the Nicholson School of Communication director in the College of Sciences,turned in his letter of resignation on March 25 after a six-month investigation by UCF. […] Out of 113 trips he has taken since his start at UCF in 2009, he is being accused of “double-dipping” on travel expenses for 40 trips by asking for payments from both UCF and a third party organization. As a result of the investigation, Chandler reimbursed UCF about $30,000 for the “overpayments and double payments” he received, according to Johnson.

And last but not least, let us stay in college, at the University of Florida, where everybody who got in to UCF wanted to go, and specifically, the Zeta Beta Tau fraternity, which was having its spring formal in Panama Beach, because that is a thing fraternities do. They were hosting this shindig at a resort that was also playing host to a disabled veterans charity. Naturally, these fine young gentlemen decided to piss on American flags and say swears at the veterans, as nice young gentlemen do:

“They actually spit on me and my service dog as well, and that’s just so disrespectful and it hurts. I come and I feel honored and I feel safe and that I belong, but now I feel like I’m defending myself,” said veteran Nicholas Connole.

“They’re a total disgrace for our military. They were urinating on the American flag, they were throwing things off of the balconies,” Cope said.

Offending veterans is apparently a more serious offense than, say, date rape, so the frat has been closed.

Yr Wonkette made a very sage observation in our earlier story on this, because yr Wonkette is nothing if not sage:

Reportedly, the Florida ZBT chapter was throwing its formal in conjunction with the chapter from Atlanta’s Emory University, but so far it seems like the Emory boys managed to behave themselves and somehow refrain from drunkenly insulting, spitting on and pissing on the disabled vets. Not to generalize about the states, but maybe this kind of thing flies in Florida, but Not In Georgia! They apparently still teach manners there.

Maybe they just follow the example of the state’s legislative leaders.

That’s all for this week, Florida. You’re depressing as fuck some days.