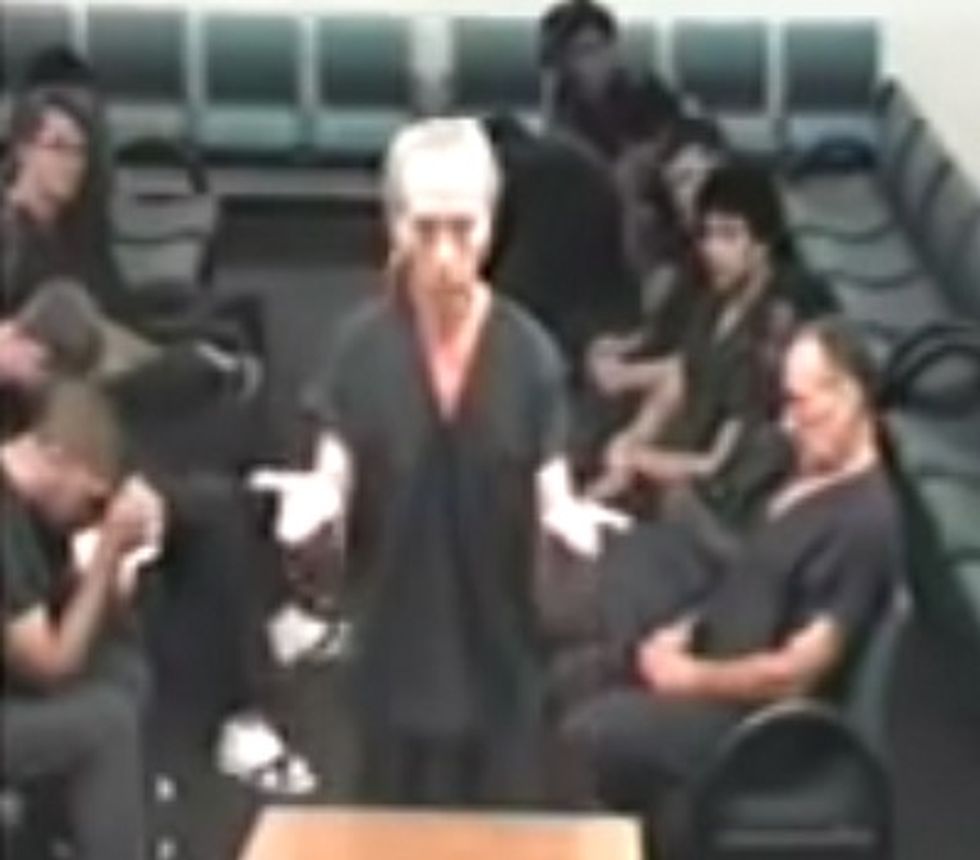 David Hall, a Sovereign Florida Man who got his day in court back in December 2014, has for some reason been rediscovered by the Internet in the last week, after this video of his appearance before Broward County Judge John “Jay" Hurley was reposted a few days ago by a funny-videos aggregator. Beyond demonstrating that nothing on the internet ever goes away, it's an impressive performance by Judge Hurley, who has clearly seen it all, and is not at all swayed by Sovereign Citizen linguistic gymnastics. It's a little like watching an old episode of Night Court, even though we really miss Bull. Fortunately, the defendant provides plenty of that all on his own.

First, Hall has to clarify whether Judge Hurley is even a judge, because for Sovereign Citizen Language Magic to work, you have to perform all the rituals correctly:

That was quite gracious of Hurley, really. Then we get to the really important conjuring. You see, David Hall, the guy standing before Judge Hurley is definitely not the same legal entity as the person "DAVID HALL" who is named in court documents, and may also be a corporation owned by the U.S. Government because of his birth certificate. Or so the U Don't Have To Follow Laws U Don't Like handbook says. Hurley barely blinks as Hall launches into his explanation of how he's appearing in court: He's not the David Hall who's being charged with multiple charges, including DUI, driving on an expired license, failure to pay traffic fines, failure to drive in a single lane, and driving without license plates. Nope, definitely not that guy:

Fine, you want to pretend you're an individual, and the "person" David Hall is another entity, we're good, we can roll with that. You're not a number, you're a human being. Now go right ahead, Number Six. Hurley has clearly dealt with these folks before, and he's not going to let his court be slowed down by a lot of pseudolegal gibberish. It's really rather beautiful to behold, as Hurley simply steamrolls past Hall's bafflegab and turns it back on him:

Hurley goes on to inform Hall -- the settler, the agent, the individual, and even the person -- that since all of the available David Halls went and drove on a suspended license and got themselves arrested for a DUI while they were out on bond for separate felony and misdemeanor cases, then no way is Judge Hurley going to grant bond for the new case, sorry. One of the David Halls breaks in to object with a favorite Sovereign Citizen claim: he wasn't "driving," he was "traveling," which means that the government can't regulate him, no way:

Hall: May I make a correction sir? Hurley: Go ahead, sir.
Hall: Yes, I'm traveling, you said that -- you said that -- you used the term "driving" and I was traveling sir, traveling.
Hurley: Okay, all right. So the settler, the agent, the individual or the person David Hall for traveling on a public highway or public road in the State of Florida was allegedly doing so without a valid driver's license and he has done it several times in the past.

It's one of the most beautiful judicial "Yeah, whatever" moments we've seen. Hurley sets bond at $10,000 and then adds that since David Hall the settler, agent, individual, person, and shambling pile of incoherence are all a danger to public safety, not a single one of them will be eligible for release from the Broward County Jail, sorry buddy or buddies.

At one point, when Hurley turns Hall's word games back on him, asking Hall who he's "speaking on behalf of now," Hall insists, "Sir, I don't understand that question. I believe that you're trying to confuse me now." You think?

Ultimately, reality wins out over jiggery-pokery, and when Hall insists one more time that he's David Hall the individual, not David Hall the person, Hurley shuts him down, with audible laughter from the other defendants waiting to be processed:

When you see the person David Hall, tell him he's not leaving jail either, all right?

Boom. Hurley dismisses Hall with a cheerful "Have a nice day," and once all of David Hall is taken back to his cell, apologizes to the public defender, Dale Miller, for the delay, explaining he just wanted to get all that on the record. Miller replies, "Someday, your honor I'm going to do a study and figure out exactly what's going on with all that stuff. Right now, it is all just a bunch of mumbo jumbo, to me."

Hurley mentions that this wasn't his first tangle with Sovereigns, and notes that some of them rendered their very own judgment against him for $100,000. Miller asks if he's started making payments on that, and Hurley just chuckles and calls the next case.

And that, kids, is how well the Sovereign Citizen crowd's arguments hold up in a real court. Even one where the flag has gold fringe on it.