Florida Man With Private Arsenal Just Wanted To Stand His Ground Against Obama, Own Family 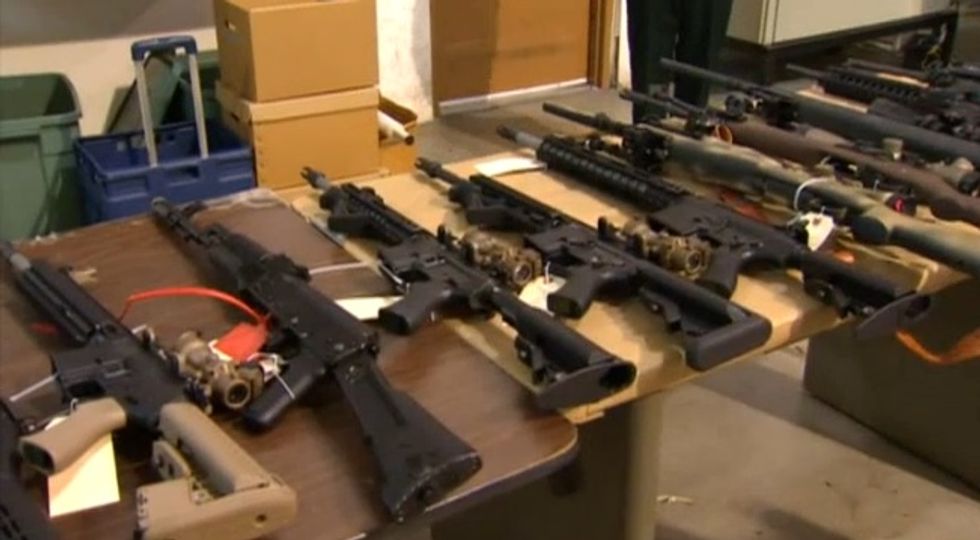 In an isolated incident, a Florida gun nut with a private arsenal has been arrested and charged with trying to hire a hit man to kill members of his family. Jason D. Simione, 39, had also made threats against President Obama, and had bomb-making materials in his home, which he had fortified against possible assault from a SWAT team. Simione is the owner of Bulldog Tactical Equipment in Fort Lauderdale. He seems nice.

Simione was arrested and held on a $5 million bond Tuesday after his wife filed child abuse charges against him, accusing him of injuring their 9-month-old baby by throwing the child onto a table.

Simione had been looking into a creative resolution to a child custody case; Broward Sheriff's Office Det. Ricky Libman said that he

“inquired to have a person come up from El Salvador, specifically a MS-13 gang member, and offered to pay up to $150,000 to dispose of his wife, mother-in-law and brother-in-law, and child, if he did not receive custody of the child[.]"

Libman described one room of Simione's home as a "last stand room":

“The back of the door was a silhouette of an average-sized person that would be on the outside of the door with X’s marked where to shoot at to make sure to hit a vital organ. He basically set up kill zones in his house for an assault," Libman said. "The walls were refortified, the windows were barred. It would be a nightmarish tactical situation if anybody had to actually go in there."

Just to make sure he was adequately defended against jackbooted federal thugs, Simione had amassed 68 guns, including a .50 caliber sniper rifle, semiautomatic rifles, shotguns and handguns, and between 60,000 and 70,000 rounds of ammunition, as well as "illegal ammunition including armor-piercing rounds." Bomb-making materials were also seized from the house. Broward County Sheriffs said that all of the guns were purchased legally, which we would say makes Simione a poster boy for the NRA. Because Simione's wife has a protection order, the guns were "taken for safekeeping."

According to the indictment read by Judge John Hurley, Simione's employees were apparently terrified of their boss, who they say had also been taking steroids, apparently striving to become a character in a Carl Hiaasen novel, only without the amusing quirks. He regularly made threats against his wife, and said he would kill anyone who tried to arrest him or take his child. He also "expressed distaste for the U.S. government policies" and regularly said that someone should murder the President. Frankly, with all the other creepiness brewing in the guy's head, those almost seem like afterthoughts.

Yr Wonkette would like to nominate Jason D. Simione as "Florida Man" for life.