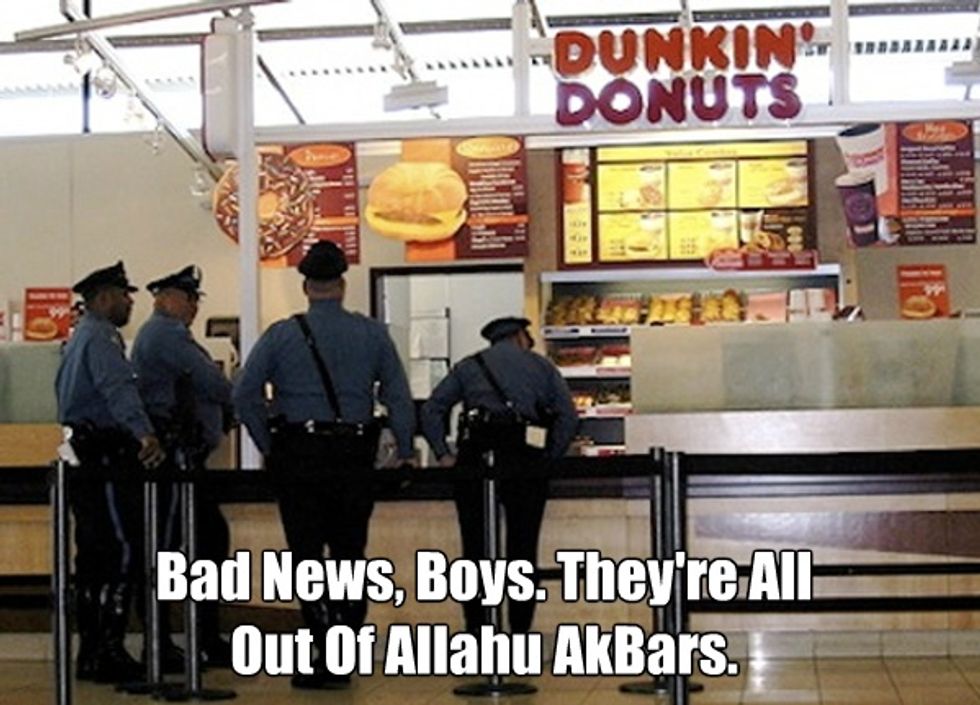 So here's a charming story from Florida: a group of anti-Islam wingnuts is attempting to get a Broward County sheriff's deputy fired because he's (gasp!) Muslim. Deputy Nezar Hamze hasn't actually done anything more questionable than practice his faith, but really, isn't that proof enough? The leader of the Idiot Brigade, one David Rosenthal, is a Loyal American Patriot who doesn't understand even the first thing about the First Amendment or Article VI, Paragraph 3 of the Constitution, which he is allegedly a fan of, but the ban on religious tests for public office doesn't matter, because Rosenthal has undoubtedly seen one of the many blogs explaining how Islam isn't a real religion, duh.

"I hate Islam. Islam is evil," Rosenthal said. "Ideally, I would ban Islam in the United States."

He seems nice. Local TV station WPLG has a story on Rosenthal's personal jihad -- the station's phrasing, so good on 'em for calling out a hater as a hater -- against a law enforcement officer who is unfit for duty because a bigot says so:

Rosenthal and his Gang of Fifty (or so) held a rally outside the Broward County Courthouse calling not only for the firing of Hamze, but also Sheriff Scott Israel, since Israel endangered southern Florida by hiring Hamze in the first place. Rosenthal is especially torqued off at Hamze for refusing to comply with Rosenthal's perfectly reasonable demand that he publicly renounce Sharia, because as we all know from high school civics class, every citizen is empowered to insist that law enforcement officers comply with whatever weirdass religious test We The People decide to make up for them. Even more ominously, Hamze is the director of the Florida chapter of the Council on American-Islamic Relations, which proves he's a terrorist. (No, it doesn't.)

"I am against Sharia-compliant Muslims having any position in government, law enforcement or the schools," Rosenthal said.

At the protest, one speaker asked why Sheriff Israel had "hired a terrorist." Glad to see that some folks in South Florida are refusing to give in to fear and paranoia. Stay strong, people.

When reporter Bob Norman challenged Rosenthal, saying his call to ban Islam in the USA "goes against everything America stands for," Rosenthal merely shrugged and replied, "I think that's totally inaccurate" and said that if he had his druthers, Hamze would not merely be fired, but would also "move to some country that's Sharia-compliant." Then Rosenthal grinned like he was the cleverest motherfucker on the block.

The non-issue of a Scary Muslim Deputy has gotten a fair number of wingnuts super excited. Hamze's hiring is a source of constant outrage in the rightwing blogosphere, and WPLG notes the October rally against Hamze drew "Tea Party Fort Lauderdale founder Danita Kilcullen and congressional candidate Joe Kaufman." Not that the presence of a Real Congressional Candidate lent much credibility; Kaufman is one of those perennial candidates whose most notable qualification for office seems to be that he's worked for a whole bunch of rightwing fringe groups, notably "Frontpage Magazine," where he's written several articles condemning Hamze and Sheriff Israel.

While Hamze was not authorized by the Sheriff's office to speak to the media about Rosenthal's aggravated schmuckery, a colleague at CAIR Florida, attorney Wilfredo Ruiz, condemned the fearmongering by the local group and by such national Hate Pigs as Donald Trump:

"We don't want to make the same errors like putting people in the camps, like we did to the Japanese [during World War II], or segregating schools like in the '50s here in Florida," he said. "We are far past that."

Ruiz added that he has been assisting the FBI in a case involving recruitment by the self-proclaimed Islamic State in Florida, and that he resents seeing patriotic Muslims like Hamze being slurred:

"Like him, thousands of other Muslims in America today are wearing the uniform. ... I was, myself, a naval officer. Nobody from a desk can tell me what patriotism is when I have worn my uniform."

[contextly_sidebar id="6nEgMXX16iXQJPz08B9PozsIsRVRQeiz"]Now that is just silly, as everyone knows that Muslims only join the American military to get the benefits, as explained by Islamic scholar and former Miss Puerto Rico Destiny Velez. Ruiz also pointed out that the Quran commands Muslims to "obey all laws of the place in which they live." But that's probably just more of that Taqiyya stuff what Muslims do, where they lie so they can kill you.

Rosenthal is seriously worried that the presence of a Muslim deputy sheriff marks the beginning of "The Islamization of Broward County," which he supports by noting that there are many violent verses in the Quran. Asked about similarly violent passages in the Old Testament, Rosenthal stated:

[I]t doesn't apply to him because he is a Christian and doesn't necessarily have to follow teachings from the Old Testament.

"Just because I believe in the Bible doesn't mean I'm called to follow everything in Deuteronomy," he said.

On the other hand, those Islamics, they're all a danger because can't you see the violent stuff in their book? A spokesperson for the American Center for the Study of Cognitive Dissonance told Yr Wonkette that the institute would be very interested in examining Rosenthal, and would ask him to donate his brain after he passes on, should that organ ever be located.