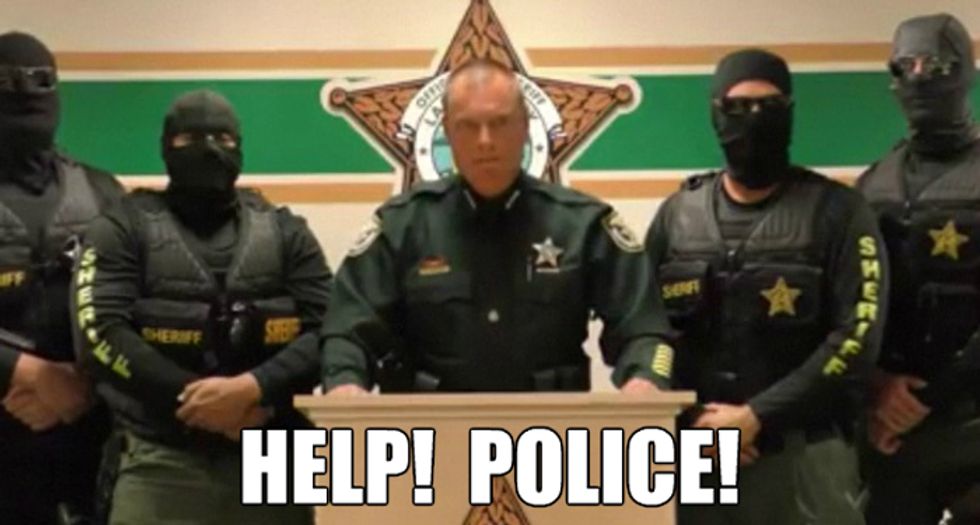 Meet the Sheriff of Lake County, Florida, Peyton Grinnell, and his buddies from either ISIS or the Sinaloa drug cartel. Friday, Sheriff Grinnell posted this excellent video to his department's Facebook page, warning heroin dealers that he and his undercover drug officers are coming to blow the doors off their houses and arrest them as aggressively as possible. And then maybe behead them, because drugs are serious business. Enjoy this cinematic tour d'excessive force by the Sheriff's Office "Community Engagement Unit":

To the dealers that are pushing this poison, I have a message for you: We’re coming for you. As a matter of fact, our undercover agents have already bought heroin from many of you. We are simply awaiting the arrest warrants to be finalized.

Enjoy looking over your shoulder, constantly wondering if today’s the day we come for you. Enjoy trying to sleep tonight, wondering if tonight’s the night our SWAT team blows your front door off the hinges. We are coming for you. If our agents can show the nexus between you, the pusher of poison, and the person that overdoses and dies, we will charge you with murder. We are coming for you -- run.

This is some terrific Community Engagement, certain to go down in the annals of famous Public Service Announcements along with the "Brain on drugs" videos. Not because it's effective, but because it gets lot of attention and doesn't really accomplish much of anything. Do we have any idea whether Lake County's heroin dealers are on Facebook to begin with? Hell, we've seen The Wire -- the dealers are probably reciting the lines to each other while passing out from too much laughing (and also heroin).

Those hippies at Miami New Times point out that most real experts on the opioid problem say there's not much value -- beyond publicity, which is really far more important than helping dirty drug addicts -- in big shows of get-tough law enforcement with SWAT teams busting down doors, shooting somebody's dog, and maybe throwing a flash-bang grenade in a toddler's crib while they're at it. Instead, the professionals (also a bunch of wimps) seem to think the real solution to the nation's heroin and fentanyl addiction problem lies in providing treatment to addicts, and in prevention, mostly through reducing the over-prescribing of opioid pain relievers. Hasn't anyone pointed out to these so-called experts that neither of those makes for a truly kickass video? Reporter Tim Elfrink asks:

At least half a dozen drug recovery centers exist in Lake County. Is Grinnell's office putting as many resources into helping addicts recover as it is ramping up its war on heroin? The sheriff hasn't returned a message from New Times to answer that question.

Reaction to Grinnell's video has been mixed, to say the least. Paul Szoldra, of Military and Defense Insider, offered his own analysis on Facebook, saying "ISIS just released another goddamn video. Oh." He followed that up with a comment: "Some sheriffs are in law enforcement. Some others are trying to get on Fox and Friends."

Meanwhile, on a YouTube repost of the video by "USNationalistNews," the commenters are taking that ISIS imagery and embracing it, like these geniuses:

That last one was probably inevitable.

Yr Wonkette is happy to see someone's finally decided to use some harsh language about drugs. It's about time someone approached this serious, complex problem by making threats of force. Oughta work this time, for sure!

Yr Wonkette is supported by reader donations. Please click the "Donate" clicky below to send us money. Or we might have to come and take it.