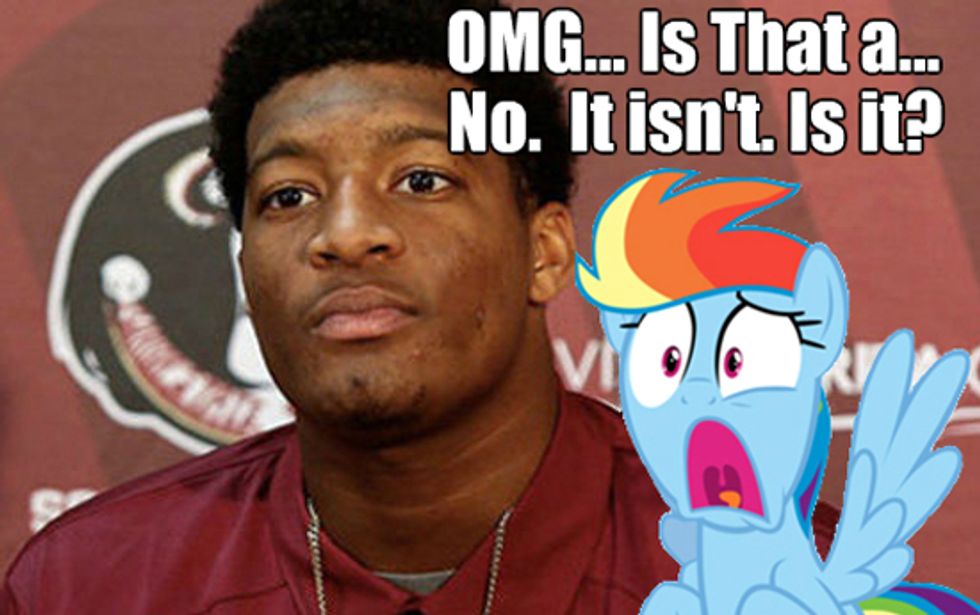 Good god, y'all, we know how sick you are of all the disgusting horrible woman abusers in the National Football League, so for a break, here's a story about a disgusting horrible woman abuser in the NCAA. Not just any old college f'ball player, either, but a winner of the Heisman Trophy, young Jameis Winston of Florida State, who was accused ofraping a FSU student in 2012. But the lucky lad was never charged, supposedly due to "shortcomings in the police investigation," the greatest of which is that there wasn't much of a police investigation at all:

The police did not follow the obvious leads that would have quickly identified the suspect as well as witnesses, one of whom videotaped part of the sexual encounter. After the accuser identified Mr. Winston as her assailant, the police did not even attempt to interview him for nearly two weeks and never obtained his DNA.

The detective handling the case waited two months to write his first report and then prematurely suspended his inquiry without informing the accuser. By the time the prosecutor got the case, important evidence had disappeared, including the video of the sexual act.

Hey, stuff happens, and that was all a long time ago. And Winston insisted it was consensual sex, so was an investigation even needed? Besides, FSU is ranked #1 in f'ball. That should count for something. More recently, the University has opened a new investigation into the incident, to determine if Winston violated the school's code of conduct. Also, the Justice Department is investigating the University for possible civil rights violations under Title IX, which prohibits gender discrimination, so there's at least that.

In any case, here's the real breaking news: Even though he may have gotten away with an (alleged) sexual assault, Winston is going to face justice in another recent incident. It's a pretty nuanced situation, so we'll let Deadspin handle the details:

Florida State quarterback Jameis Winston stood on a table and yelled "fuck her right in the pussy" on campus today [Tuesday], according to a bunch of students who saw him. For the unaware, "Fuck her right in the pussy" was a fake video that turned into a meme, with a few people shouting it on live news broadcasts. It is now dead, because Jameis Winston climbed onto a table and yelled it. College jokes!

Well! Faced with such a high profile player shouting something so very obscene, so very publicly, the FSU athletic program took quick action, and by noon Wednesday they had reached a decision: The star quarterback will sit out the first half of Saturday's game against Clemson. Justice, swift and true. It's awfully reassuring to know that Winston will have to take some responsibility for his actions, and we hope he's learned his lesson.