For Christmas, Trump Gives Refugee Parents A Break From Their Tiny Babies -- For Months Even! 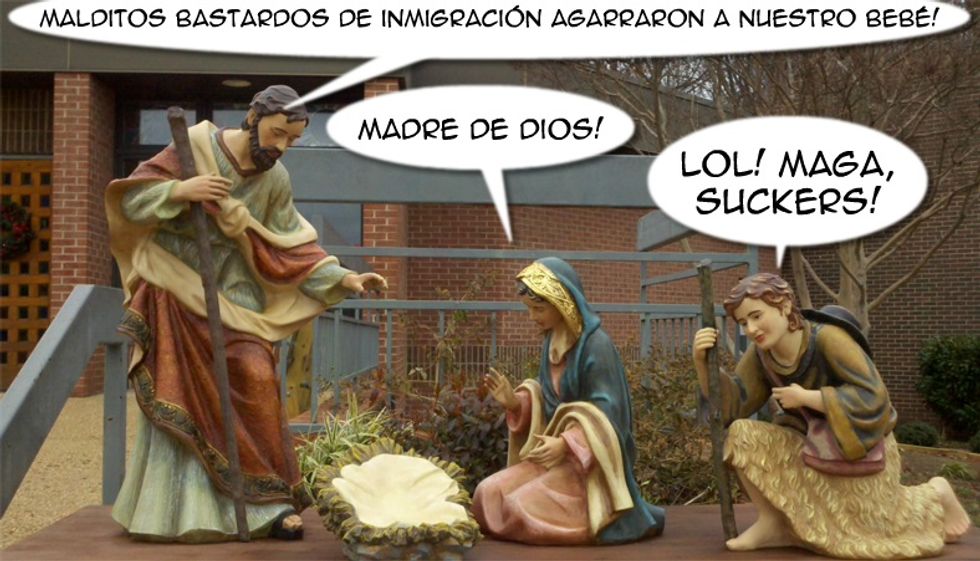 Could be that episode of Dragnet where the little kid took Baby Jesus for a ride in his Christmas wagon.

The New Cruelty doesn't take holidays off, we learn in this New York Times story about a creative new plan to discourage families from crossing the southern border by threatening to take their children away. After all, they're trying to come here to take our precious fruit-picking jobs away, so it's only fair to take away the fruit of their wombs!

You see, while border crossings had dropped off for a while after Donald Trump took office, the number of undocumented migrants being caught has started to rise again, and Team Trump figures the real problem is that we're just not cruel enough yet. Since they can't just get away with a policy of shooting people on sight like the policy experts in the Breitbart comments recommend, administration officials are considering going after children, because while adult migrants can at least be exploited for cheap labor, their children don't contribute anything to the economy. So why not make them useful, at least as potential hostages, to encourage families not to come in the first place?

Under current policy, families are kept intact while awaiting a decision on whether they will be deported; they are either held in special family detention centers or released with a court date. The policy under discussion would send parents to adult detention facilities, while their children would be placed in shelters designed for juveniles or with a “sponsor,” who could be a relative in the United States, though the administration may also tighten rules on sponsors.

The Times notes previous administrations worried that separating families might encourage more people to rely on human smugglers who might rob, rape, or kill them, or that it would discourage families with legitimate claims for asylum to stay in their home countries and face whatever dangers are there. But now that the Trump administration has declared all undocumented migrants dangerous criminals, such wimpy loser weakness is a thing of the past, and getting tough is valued above all else -- especially because it could discourage asylum seekers, whose cases can take years to resolve. If they stay home and get killed, then we don't have to worry about them -- and if they're dissuaded from even trying, we'll never hear their stupid sob stories in the first place. So really, it's a guilt-free solution that's actually better for Those People:

Tyler Q. Houlton, a spokesman for the Department of Homeland Security, would not comment on the statuses of the policies being considered, but said that migrating illegally with children was itself cruel. “The dangerous illegal journey north is no place for young children and we need to explore all possible measures to protect them,” he said.

Trying to get your kids across the border is dangerous. So if we threaten to take your kids away, your family will stay together. This really is the kindest option. What Honduran family wouldn't prefer to bury their child at home after a gang murder?

When then-Homeland Security Secretary John Kelly floated the idea of separating children from their families earlier this year, people looked at him like he was proposing something insane, which he was, and then he backed off the idea, saying children would only be taken away when they were in danger from one or both parents.

Yes, ICE has found a fun way to turn that into an excuse to separate families anyway. Consider the case of José Fuentes and his one-year-old son Mateo. According to his wife, Olivia Acevedo, Fuentes turned himself and Mateo in to border agents in November, saying he was claiming asylum because of gang violence back in El Salvador. After four days in family detention, Mateo was taken away and placed in a shelter in Laredo, Texas, while Mr. Fuentes was shipped off to another immigration prison in San Diego, a thousand miles away.

For six days afterward, Ms. Acevedo said, she, her husband and their lawyers could not confirm where Mateo was. They were terrified. “Can you imagine?” she said in Spanish in a telephone interview from Mexico, where she remains with the couple’s other son, Andrée, who is 4. “It’s inhuman to take a baby from its parents.”

But don't worry! ICE had a perfectly good and sound reason to take a baby away from his father: Fuentes didn't have what ICE considered adequate written documentation to prove he really was Mateo's father, so far better to take the baby away and plunge the family into terror, for his own safety, you know.

Ms. Acevedo said she saw Mateo for the first time since their separation last week, through a five-minute video call arranged by the facility where he is being held. Mateo cried the whole time, she said, adding, “It’s a form of torture.”

She also said that if they'd known the baby would vanish into bureaucratic hell, Fuentes never would have attempted to seek asylum -- and if that isn't proof that Donald Trump's plan to tear children from their families is wise and good, we don't know what is.

But don't you go calling this policy inhumane, because you know who the real monsters are? The parents, of course, who are foolish enough to think the Land of the Free wouldn't pull this shit. In fact, knowingly bringing children across the border into Trump's America is almost certainly evidence that these parents are unfit, so taking their kids away may be the smartest move ICE can think of.

Yr Wonkette is supported by reader donations. Please contribute to our "time to start day drinking" fund by clicking here.