For His Next Trick, Ted Cruz Will Ruin 'Office Space' And Geto Boys Forever 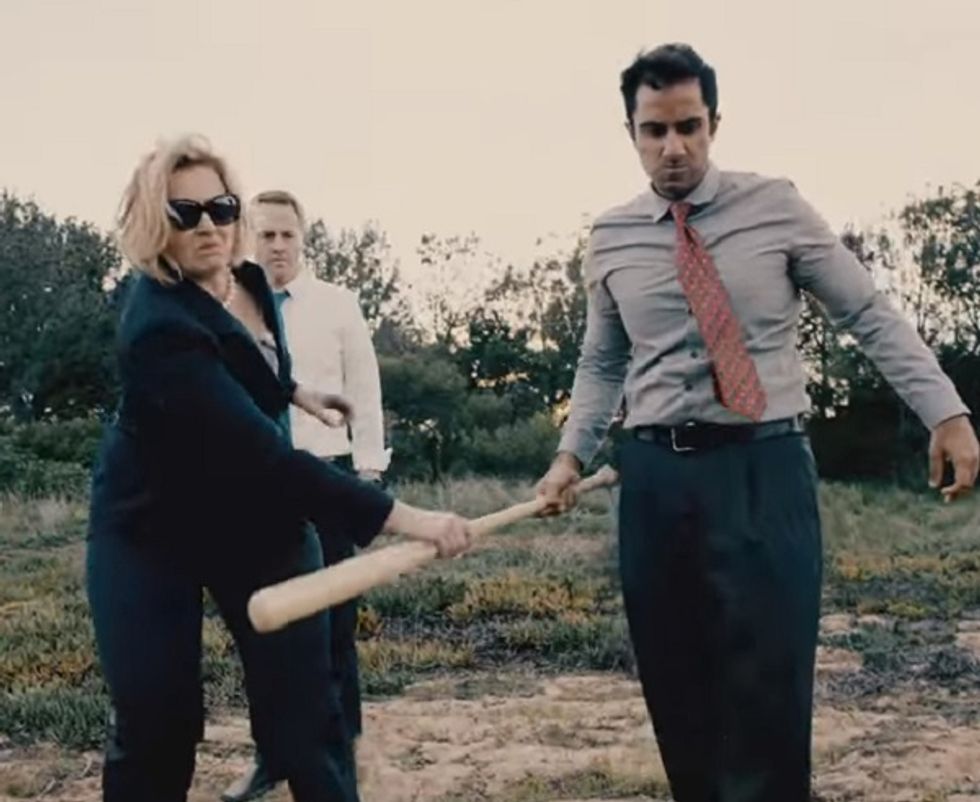 It is exactly like that scene from the movie about corporate drudgery, see?

The Ted Cruz campaign dropped yet another of its efforts to coopt and taint all of American popular culture Friday, this time with an anti-Hillary Clinton ad ripping off a scene from Mike Judge's Office Space, even accompanied by a parody of Geto Boys' "Damn It Feels Good to Be A Gangsta." It's actually fairly well-executed, with a credible Hillary impersonator helping smash a computer (read "private email server" and "high crimes and misdemeanors") instead of a dysfunctional printer, and several shot-by-shot recreations of bits from the original. Like virtually everything else Ted Cruz does, it's a reasonably competent but evil perversion of stuff that other people did better, leaving you somewhat impressed but vaguely nauseated.

Now, to start with, let us note, with Comic Book Guy's dismissive sneer, that while Office Space did in fact use "Feels Good to Be a Gangsta," it was in a Completely. Different. Scene. The printer-smashing scene was accompanied by a different Geto Boys song, "Still":

But that's mere trivia compared to the more serious violence the Cruz ad does to the movie it's stealing from. Where the original is a wish-fulfillment fantasy of every office drudge who's ever yearned to murder the devices that make getting through the day a form of torture, the parody turns it into a sinister fantasy from the Drudge Report, with Hillary and shadowy aides destroying evidence of her "crimes," whatever the hell they're supposed to be, in a cover-up that will forever keep the public in the dark. The mood of the original is gleeful jouissance, a finger in the eye of The Man. In the parody, Hillary is The Man, the ultimate insider cackling as she gives the finger to the public's Right to Know, complete with the out-of-context line "What difference does it make?" which proves that she cold-bloodedly murdered four Americans in Benghazi.

[contextly_sidebar id="Qr5slt4xTNZjuYbG90OV1zl6hU8fg7Pg"]As with every bit of pop culture he touches, Cruz seems to have no idea what the fuck the source material is about. He completely missed the point of Green Eggs and Ham; he loves "The Simpsons" although the show routinely mocks Republicans and conservatism; and he thinks he knows exactly how to do a "Saturday Night Live" fake ad (he does not). And of course, he totally spoiled the new Star Wars movie and its revelation that Boba Fett was a contractor for Halliburton.

In this one, Cruz misses the point of Office Space: This is a movie that does not love hard work and the ideology of meritocracy. It celebrates creative sloth, slacking if you can get away with it, and bucking the corporate order wherever possible, and suggests that America's holy caste of job creators are a bunch of mindless idiots who love slogans and five point action plans more than getting anything useful done. Jobs are something to be endured, not the magical providers of dignity and meaning through the Puritan Work Ethic.

[contextly_sidebar id="GzBhVS0RiX4sIMxUCVeTU5utZ2s82vuV"]Oh, and we won't even start on the complete wrongness of the "Feels Good to Be a Gangsta" song parody, which is simply vile, because as any fool knows, that song is all about Old Handsome Joe Biden.

But fine. Maybe there are some parallels. For one thing, we wouldn't be surprised if, after this ad was released, Cruz demanded that every campaign worker wear five pieces of flair. Or that Ben Carson demanded to know who'd taken his stapler.