For His Thousandth Birthday, Enjoy Ronald Reagan's Every Flavor Beans! 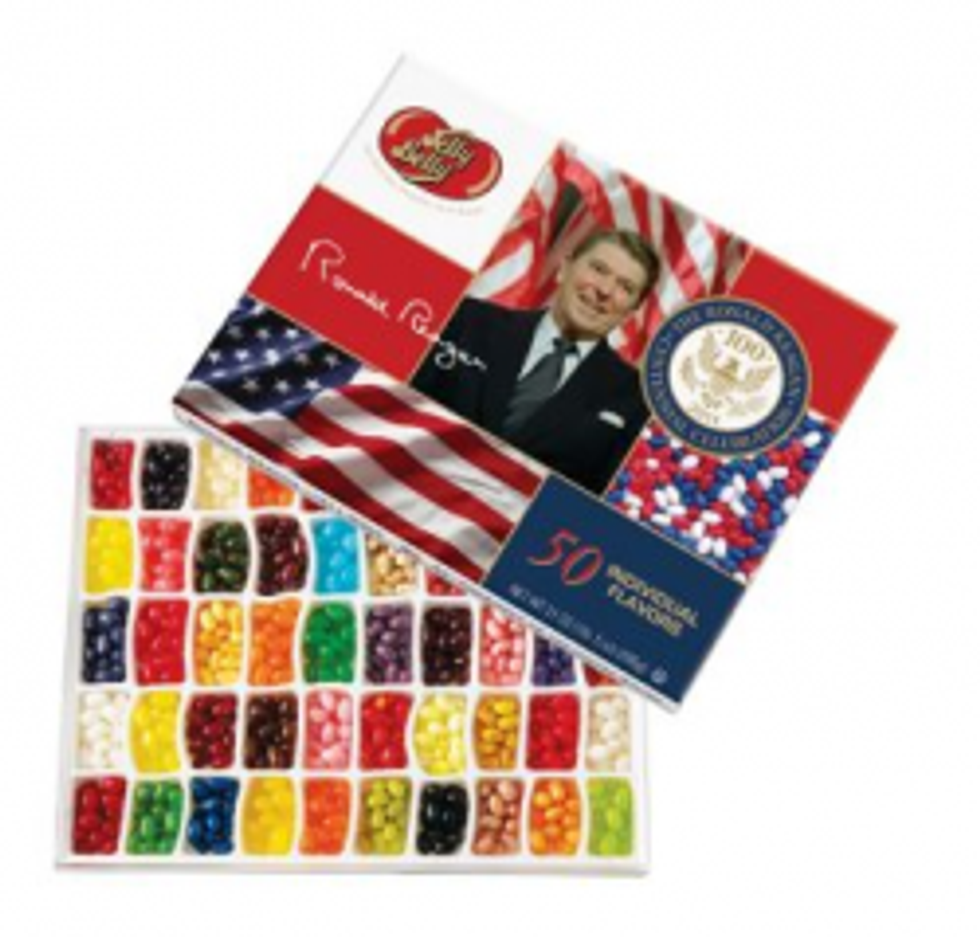 One thing Ronald Reagan used tolove was sucking on a little fruity jelly bean, back when he was president and sitting at his desk thinking about 1950s movies while a bunch of sociopaths running the White House actually began the "IslamoFascist Movement" by first employing Osama bin Laden against the Russians in Afghanistan and then giving a bunch of insane weapons to the Ayatollah's Iran as a kind of bizarre ruin-the-world/money-laundering operation against the, uh, communists in Central America. Yes sir, Ronny loved these "Jelly Belly" concoctions. It was hard to keep that phony smile on his mean, rat face -- especially without a cigarette always in his mouth, which is how he kept his rage in check during the seventy or so years before he somehow became president.

Ronald Reagan, who made most of his pre-presidential money by selling cigarettes to children who just wanted to play Cowboys & Mexicans, decided to stop smoking at some point. This is a good move, health-wise! But a cigarette is a soothing thing to a weird villain who needs to keep a smile plastered over his pancake makeup, and something had to be found to replace the nicotine or at least the sensation of sucking at something, the way a flukeworm sucks at the insides of humans.

So, the legend goes, Reagan was on horseback (or helicopter) chasing some black people on welfare from Oakland to Sacramento, where they could be made an example of, when his jaw suddenly clenched nearly as tight as his spinchter due to not having his customary thirty cigarettes that morning because "Mommy" said it looked bad to smoke all the time like an Italian, and next thing you know he was smiling and nodding numbly again because he had crashed his horse/helicopter into the Jelly Belly factory way the hell out in the dirt-hills between Vallejo and Vacaville, and his mouth was filled with delicious Every Flavor Beans! And this is the main thing we heard about Reagan during his entire presidency, how he liked to eat candy like a Spaniard while inventing more "trees cause pollution" or "welfare buys the Negro a Cadillac" bullshit to tell people on the teevee.

Someone who purchased this gewgaw left an extremely Reagan-appropriate review on the Jelly Belly product page:

I bought this for my boyfriend for Valentine's Day and because he's a huge fan of Reagan. It came in a great commemorative box with what seems like a booklet enclosed. He hasn't opened it yet, but it definitely seems like a great item to remember Reagan by.

Exactly. Don't ever open that book! Facts are stupid things!

The only negative as mentioned was not enough candy, but that's just because they're aren't ever enough jelly beans for me no matter how many I have. So many people loved Ronald Reagan that this gift would be perfect for anyone at any occasion.

Other customers suggest the "Reagan Flavor Jelly Belly" tastes like urine and mothballs. [Jelly Belly via the sublime Juli Weiner]