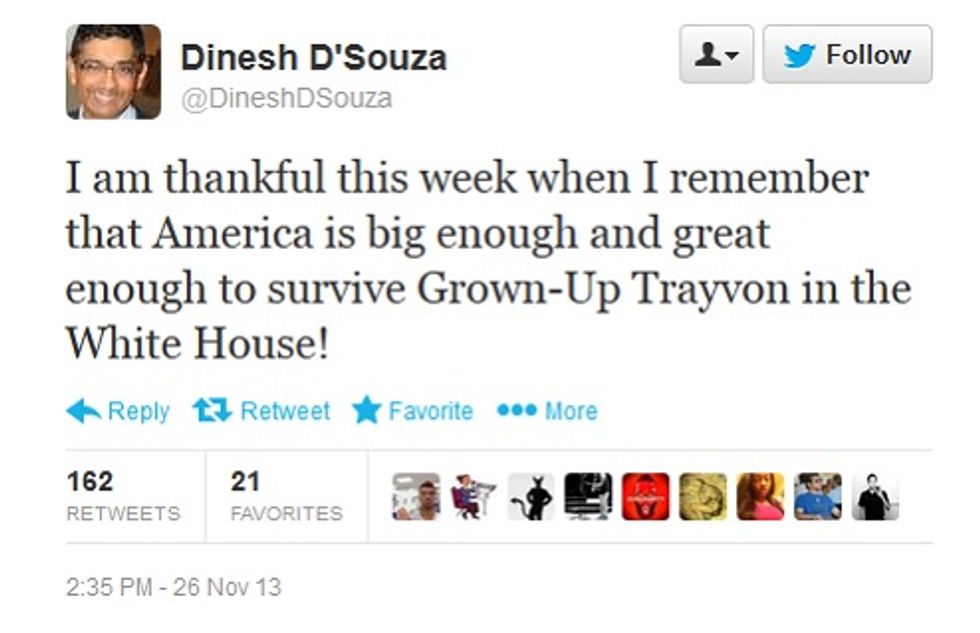 Twitter is, of course, the place where people go to embarrass themselves in public. That's just part of the day-to-day background noise. Throw in a national holiday, and you get all sorts of beautiful new opportunities to be an ass. Case in point,this tweet from conservative intellectual powerhouse Dinesh D'Souza, who's thankful that America will survive Barack Obama even though D'Souza himself markets rhetoric about Obama being the death of America forever.

But, apparently, now the threat that Barack Obama poses to America is not that he's an obsessive anti-colonialist who wants to ruin America so that America will become more like his beloved Kenya or something. Now, the threat is that Barack Obama is a grown-up version of a scary drug-crazed thug hologram that conservatives have erected over the grave of a dead seventeen-year-old. Haha, it is so amusing, this tweet about a dead boy that D'Souza rather quickly deleted!

On the other hand, Barack Obama is probably thankful that he has had the good sense to stay married to Michelle, and hasn't made an embarrassing hash of his family and professional life like some conservative intellectuals we could name.

At least now we know who to mention in our annual William S. Burroughs post on Thursday.