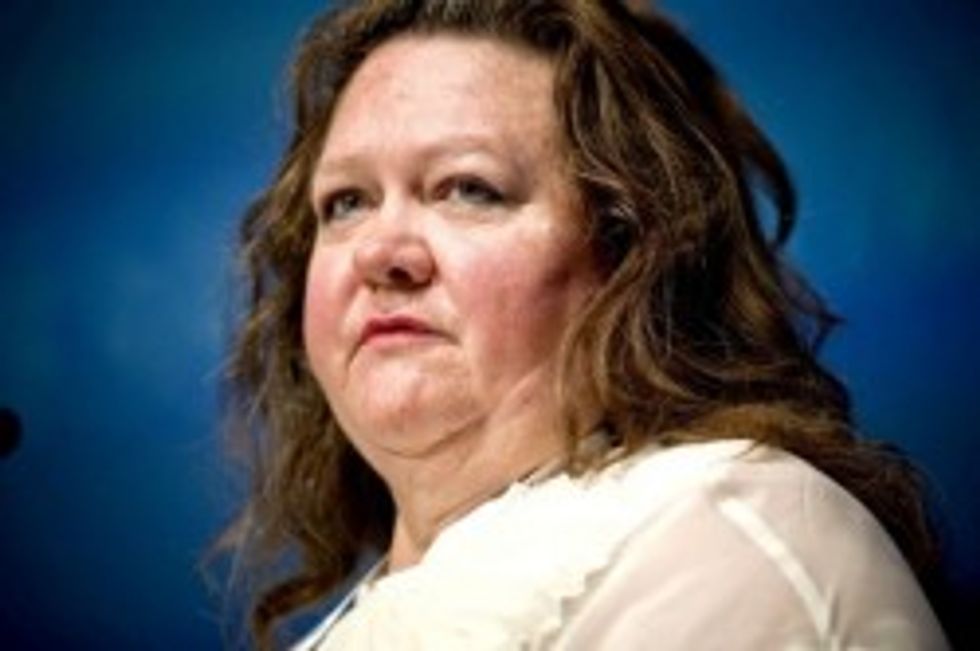 Hey--remember Gina Rinehart?  Oh, sure you do! She is the world’s richest woman and by some bizarre coincidence, also seems to be one of the world’s worst people.Here she is, warning Australians that it is ‘too expensive’ to mine there because she can hire Africans for less than $2 per day and oh, here she is again, suggesting that Australia make itself more profitable to her by passing a healthy wage cut. And before that, on Thursday, August 30, she advised us Poors to shut up and eat our gruel. No, really!  "If you’re jealous of those with more money, don’t just sit there and complain,” she said in a magazine piece. “Do something to make more money yourself — spend less time drinking or smoking and socialising, and more time working.” What a nice lady! Isn’t she charming? What a national treasure for Australia, they must be so glad they have her all to themselves. Oh you do not find this charming? Well here, Mark Hendrickson has published a nice long essay in Forbes about how awesome Gina Rinehart is and why we should defend her specific brand of horribleness and praise her for telling the TRUTH, yes, the TRUTH, about Poors and how much we love our drinking and our socializing. Also? We should stop demonizing rich people because there are "good" rich people and "bad" rich people, and you'll never guess which one Gina Rinehart is.

CNBC published some blunt statements made by Gina Rinehart, an Australian who is worth about $19 billion. Clearly tired of being dissed, vilified and attacked for her wealth, the outspoken Ms. Rinehart wrote an article full of unapologetic statements of economic truth. A choice sample: “There is no monopoly on becoming a millionaire. If you’re jealous of those with more money, don’t just sit there and complain. Do something to make more money yourself—spend less time drinking, or smoking and socializing and more time working.”

We will just interrupt real fast to point out that Gina Rinheart INHERITED her wealth. Also it's possible that she was being "dissed, vilified, and attacked" for being a shitty person and her wealth had nothing to do with it, so let's keep that in mind as we move on.

Ms. Rinehart wasn’t putting down people who work hard and haven’t struck it rich. What she protests (as I suspect many rich people do, but refrain from saying so because it would bring even more unpleasant attention to them) is people resenting honestly gained wealth as if some sort of crime against one’s fellow man had been committed. She knows that in a market economy, honest businessmen earn their fortunes by providing the goods and services that people want.

Yes, she HONESTLY inherited that wealth and now she's HONESTLY trying to expand it by exploiting Poors in Africa, which is how all honest businessmen earn their fortunes, by providing "goods and services people want," and who are we to put her down as though she gained that wealth through exploiting her fellow man -- by, say, hiring Africans to work in mines for less than 2$ per day while she "earns" $600 per second.

The number one culprit to blame for anti-rich sentiment is rich people themselves—not the majority of rich people who are honorable, but the minority of rich people who got rich by cheating. Those cheaters fall into two categories—those who broke laws (frauds, thefts, etc.) and those who grabbed unearned, undeserved gains under the cover of the law (government privileges, such as subsidies, grants, special protections from competition, etc.)

By the way -- that link? Which apparently serves as a citation to the assertion that a majority of rich people are honorable? It goes to an interview with some guy who is talking about reforming Wall Street using "vision and values," and in no way demonstrates that rich people -- a majority or otherwise -- are honorable, even if we use "Wall Street" as a synonym for "rich people," which itself is a pretty big leap.

We need a lot more fortunes like Gina Rinehart’s and a lot fewer fortunes like those that come from green boondoggles (Solyndra, et al.), ethanol mandates, agricultural subsidies, Wall Street bailouts, climate-change research grants, industrial semi-nationalizations, etc. Free-market fortunes add to our wealth; politically finagled fortunes subtract from it. The former are our economic benefactors, and the latter are economic parasites. We don’t need to tax the former more; we need to subsidize the latter less.

Yes, we totally need more fortunes that come from inheriting $30,000,000,000 from a parent and also from exploiting labor in the global south! This is what we need, you guys, and it's a travesty -- a TRAVESTY -- to suggest otherwise, what are you, a communist?