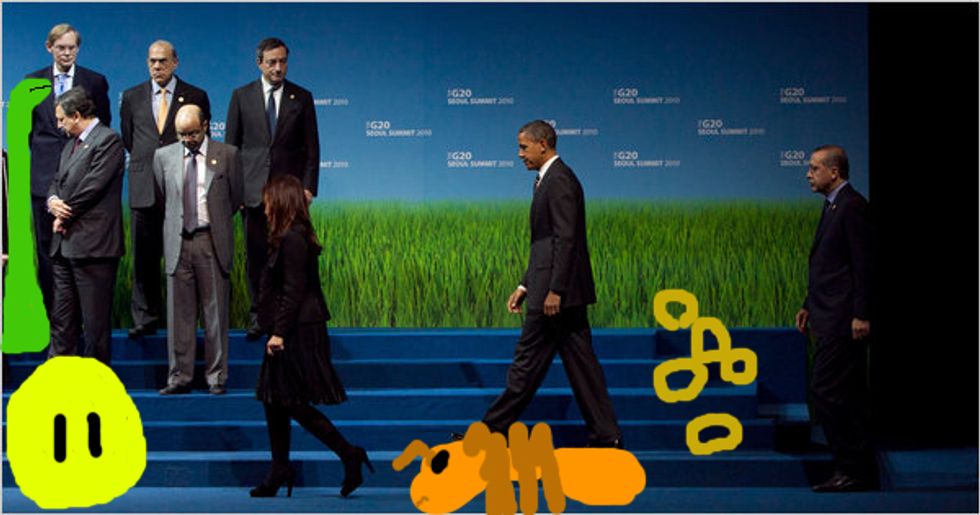 At one point, foreign leaders all wanted a piece of Obama so they would be able to tell their countrymen, "I know The Black Guy!" But as you can see from this sad photo of the G20 leaders gathering for a photo at the summit's replica Honey, I Shrunk the Kids attraction, nobody cares about him anymore. “When I first came into office people might have been interested in more photo-ops because there had been a lot of hoopla surrounding my election," Obama said. "And now they just completely ignore me and tell people behind my back that I have cooties," he didn't say.

The question of whether Mr. Obama had lost his diplomatic touch was a running thread through the news conference. When a reporter asked what kind of complaints he was hearing from fellow leaders about the United States, Mr. Obama laughed it off, asking, “What about compliments?” He said other world leaders are pushing back against the United States because “we’re initiating ideas.” As to whether the mid-term elections at home have weakened him overseas, he served up a one-word answer: No.

All right, Mr. DeMille, he's ready for his close-up.

He ticked off those on the “genuine friendship” list: Prime Minister Manmohan Singh of India, Chancellor Angela Merkel of Germany; Prime Minister Tayip Erdogan of Turkey and President Lee Myung-Bak of South Korea. Then, perhaps reluctant to offend the leader of a rival country, Mr. Obama threw out another name: President Hu Jintao of China, whose clashes with the president over currency policy have drawn headlines here.

He is down to obsessively keeping a list of his current friends in his diary. Ouch. And those fake-sounding people named "Tayip" and "Manmohan"? Yeah, totally made up. Those are imaginary friends.

Well, time to get invadin' some countries. That always makes foreigners respect our president, right? [NYT]