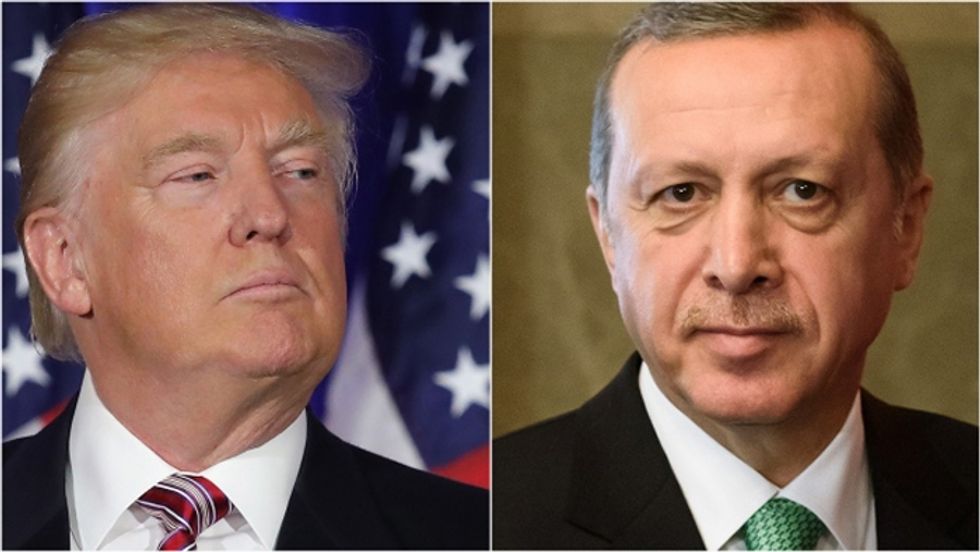 So here's some more Oh My God What Have We Done reading for you when you have a few minutes: Investigative reporter Kurt Eichenwald has one hell of a story at Newsweek about how, even before he takes office, Donald Trump's business deals in faraway exotic lands are already getting the United States of America tied up with dictators, murderers and thugs, and that's not even counting Russia. It's a hell of a read, and includes far too many examples of horrible people the president-elect's business deals have gotten all of us tied up with for us to even attempt a summary here, so let's employ the literary device of synecdoche on the story here, letting one part stand for the whole. There, now we've earned that English degree. You'd think we'd be able to write off our student loans now.

Eichenwald explains in sometimes chilling detail how the Trump family business deals have it tied up with the murderous regime of of Philippines president Rodrigo Duterte -- a connection that could be directly impacted if Trump goes ahead and gets tough on Chinese imports, since China imports a lot of raw materials from the Philippines. Get too tough on China, and the Trumps' interests in the Philippines could lose money. Similarly, Trump's attempt to toss out years of U.S. policy toward Taiwan may be connected to real estate developments on that island, which the U.S has for nearly 40 years treated as part of China. Hey, there's money to be made, and so what if it pisses off a nuclear-armed superpower on the mainland, which is quite insistent there's no such thing as an independent country called "Taiwan"?

There are also Trump's office building project in Argentina and Ivanka Trump's little jewelry concern in Japan, a deal which just happened to get finalized when Ivanka sat in on Trump's meeting with Japan's prime minister. Imagine that! Eichenwald looks at all of these, with particular attention to Trump's entanglements with Duterte, who is a very, very bad man by any standard that judges randomly murdering people rumored to be drug dealers -- or even addicts -- without trial or responsibility. Go read, and be ready for your jaw to drop.

And then there's Turkey, which will stand here for all the corrupt regimes Trump is tangled up with. Funny thing about Turkey; Trump even referred to it one time as a place where he has a "conflict of interest" because there's a Trump-licensed pair of office towers in Istanbul (he didn't build them, but gets a nice chunk of money for putting the "Trump" name on the things). Trump has been business partners in the towers since 2008 with a powerful rich Turkish real estate family that sounds a bit like his, the Dogan group, named after its founder; Turkish president Recep Tayyip Erdogan even took part in the 2012 opening ceremonies for the buildings. But after Trump started talking about banning entry to the USA for Muslims, Trump fell out of favor with Erdogan for a while; Erdogan wanted to strip the "Trump" name from the towers and even threatened to end U.S. access to its huge airbase in Turkey if Trump became president.

What The F*ck Is Going On In Turkey? A Wonksplainer!

The F*ck-Tussle in Turkey: No matter how it turned out, it was going to be Obama's fault.

Ah, but then Erdogan found a way to make Trump and his ties to the Dogan Group useful following the failed coup attempt in July of this year. The one person Erdogan blames most for the coup is a Muslim imam, Fethullah Gülen, who has taken refuge in Pennsylvania, and who Erdogan would very much like to have extradited to Turkey so he can be given a fair execution, and maybe a trial. The Obama administration has unhelpfully demanded Turkey provide proof of Gülen's involvement in the coup before it will even consider extraditing him, which seems awfully fussy for someone Turkey's elected dictator considers a terrorist (Gülen, not Obama).

He's definitely Flynn, though not necessarily In.

Wouldn't you know it, the Trump folks might turn out to be a lot less worried about trivial things like "due process" for Gülen. Trump's choice for National Security Advisor, retired Gen. Mike Flynn, wrote an op-ed for the Hill, published election day, saying the U.S. should immediately turn over Gülen, because he's an accused terrorist and a radical Islam guy, so since when does he have "rights"? (Oh, and speaking of conflicts of interest, Flynn runs a consulting firm whose top client is -- TA DA! -- the Turkish government.)

Most recently, just to give Trump some extra incentive to hand over Gülen without delay, Erdogan has stopped condemning Trump and now treats him as a great pal, and was among the first foreign leaders Trump talked to after winning the election. When they spoke, Trump had some very nice things to say about his great Turkish business partners in the Dogan Group, just such nice people. Funny coincidence: December 1, the Turkish government arrested Barbaros Muratogl, a senior executive with the Dogan Group, and accused him of being connected with July's coup, based on pretty flimsy evidence -- accusations from "an editor at a newspaper owned by a company that competes with Dogan." Says Eichenwald:

[Follow] the dominoes as they tip over. Erdogan is frustrated in his efforts to grab Gülen; Trump praises a Turkish executive who works with his business partner there, Dogan. A few weeks later, a senior Dogan executive is detained on threadbare allegations. If Erdogan’s government puts more pressure on the company that’s paying millions of dollars to Trump and his children, revenue flowing from the tower complex in Istanbul could be cut off. That means Erdogan has leverage with Trump, who will soon have the power to get Gülen extradited. The financier with contacts in the Turkish government explained the dynamic to Newsweek: “Erdogan has something he believes Trump wants, and Trump has someone Erdogan desperately wants.”

No big. Just putting the U.S. justice system over a barrel, but why should we show too much regard for the legal rights of a guy who our best pal in Turkey says is definitely a terrorist? Oh, and whose quick surrender would definitely make financial life easier for the Commander In Chief?

In what's almost certainly a complete coincidence, Team Trump announced Monday night, just as Eichenwald's story was about to come out, that it was delaying its great big press conference in which Mr. Trump was going to explain how handing the reins of his business over to his sons was supposed to free him of conflicts of interest. He also tweeted that the Trump Organization would make "no new deals" when he's in office, so hooray, he'll only be conflicted by his existing deals. We're sure he'll get those little details ironed out right away, and never have to worry about how his actions as president will affect his bottom line in other countries. At least until the next time a foreign government finds it useful to arrest a Trump business partner.