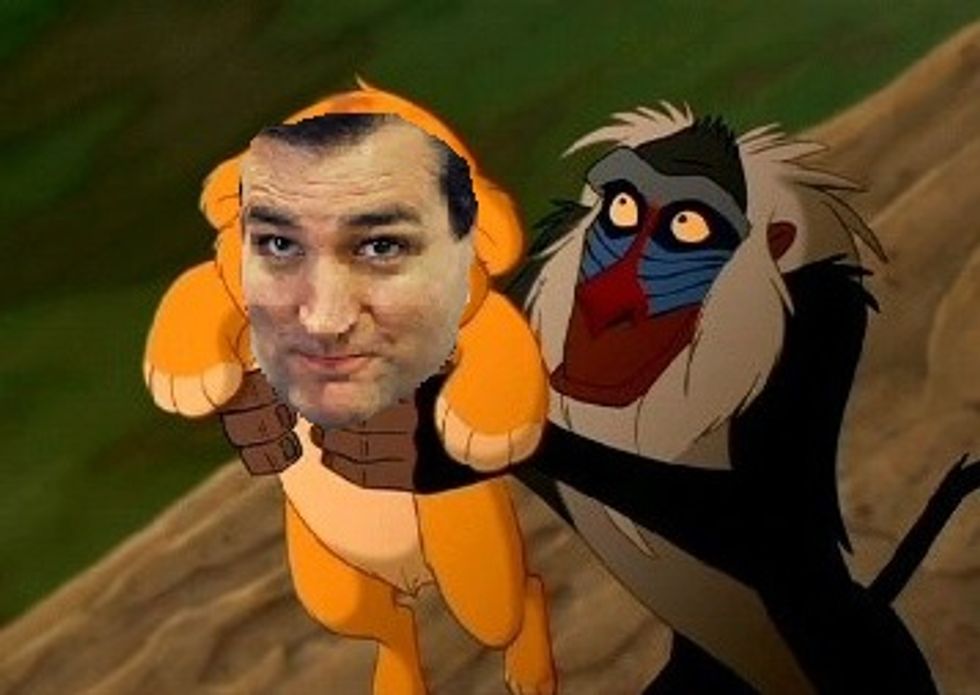 We do not yet know whether Real Christian God whispers secrets in Sen. Ted Cruz's soul's ear, like He did our last white president. Nor do we know whether Cruz, who may be legally eligible to become president despite how his dad is not from America and neither is he, will even seek that office. But at least we know this: Ted Cruz's proud papa has a pretty clear idea what the invisible humanoid deity he worships wishes to behold in the country He loves best. Specifically, God wants his (His?) son, Ted Cruz, who has been a senator for almost seven months, to save America's Freedom! Haven't you been feeling so much less free lately? Ugh, it sucks! Ted Cruz's Dad, howe spaketh the Lord unto you?

"Let me just go back to when he was maybe four. When he was four I used to read Bible stories to him all the time. And I would declare and proclaim the word of God over him. And I would just say, ‘You know Ted, you have been gifted above any man that I know and God has destined you for greatness’. And I started making declarations about the Word of God to him every day ... Before he left high school he knew without a shadow of a doubt what his purpose in life was and it was to defend and protect freedom and the Constitution."

Why are we not surprised Ted Cruz has been hearing how he is the Greatest Gift of God his whole entire life? Oh, because he is a dick, that's right. Ted Cruz, you got this?

"We are having a national debate about which direction the country should go…and what I am doing now is trying to participate in that national debate."

Yes, and if Ted Cruz, a Senator from Texas, waits there in Iowa (where he is for some reason), maybe some other politicians will show up in a couple years and have that debate with him!

Hopefully Ted Cruz doesn't actually have to be president to fix the freedom, though, because have you heard of this lady called Hillary? Total nerd, hates freedom, but we think she'll be the next POTUS. Maybe he can do what needs to be done just by running in the primary and losing to... oh shit. Rand Paul? A pizza shaped like Rick Santorum?

Meanwhile, if anyone runs into Ted Cruz's dad, can they ask him how God wants Bank of America's stock to perform over the next 10 years, relative to the market? Also we are hazy on how babby is formed. Penises, right?