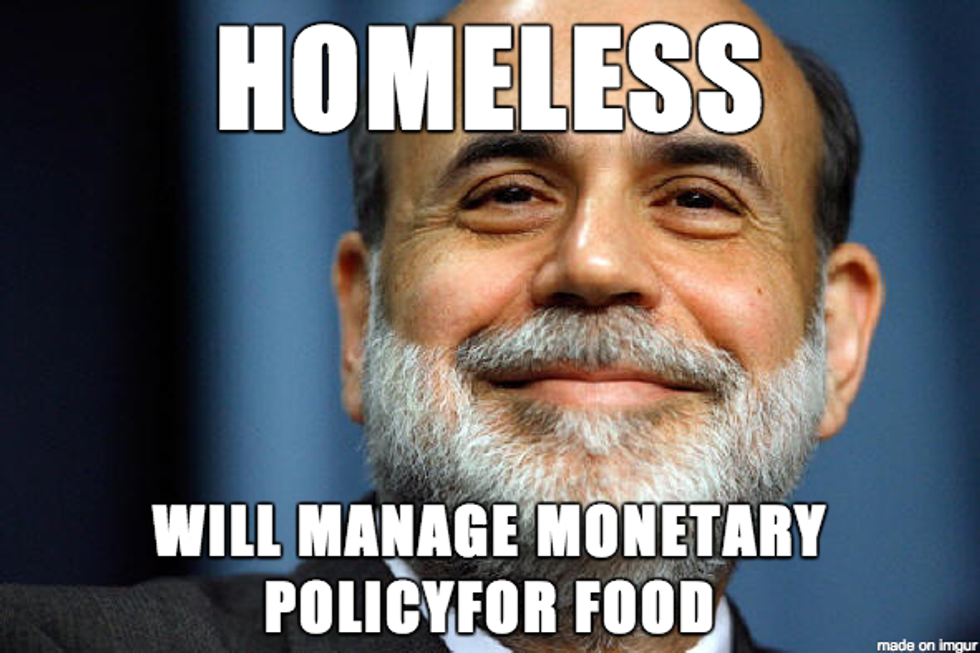 The next time you see Ben Bernanke and he's all like, "Bro, could you spot me five bucks, bro?" do NOT spot him five bucks, bro, because Bernanke ain't good for it. That's not our opinion, it's the opinion of an as-yet-unnamed financial institution, at least if you take Bernanke's word for it.

The former Federal Reserve chairman and erstwhile Liz Warren punching bag told an investors conference in Chicago that he recently tried to refinance his mortgage and got denied like a common Poor, so sayeth the Bloomberg.

The former Federal Reserve chairman, speaking at a conference in Chicago yesterday, told moderator Mark Zandi of Moody’s Analytics Inc. -- “just between the two of us” -- that “I recently tried to refinance my mortgage and I was unsuccessful in doing so.”

When the audience laughed, Bernanke said, “I’m not making that up.”

What do you think the audience did after Bernanke assured them this wasn't a joke? Do you think they kept laughing, because they realized Bernanke was a Poor, and what is the point of being a Master of the Universe if you can't laugh at the povos in your midst? Do you think they reconsidered their career choices after realizing that the numbers they move around spreadsheets all day reflect real, actual human lives? Or do you think they feverishly went to work on ways to sell Ben Bernanke a subprime mortgage, collateralize that mortgage, and sell it to public pension funds?

[The Bernankes] refinanced the property in October 2009, after the ARM was scheduled to start adjusting

Yes, you read that correctly: like so many Americans, Ben Bernanke got whipsawed by the combination of an adjustable rate mortgage and the greatest financial collapse since the Great Depression. And like so many Americans, Bernanke's trying to once again refinance his mortgage in an attempt to climb out from the hole Wall St. dug for all of us. Federal Reserve Chairs -- they're just like us!

“The housing area is one area where regulation has not yet got it right,” Bernanke said. “I think the tightness of mortgage credit, lending is still probably excessive.”

[Bloomberg via CBC via my dad]