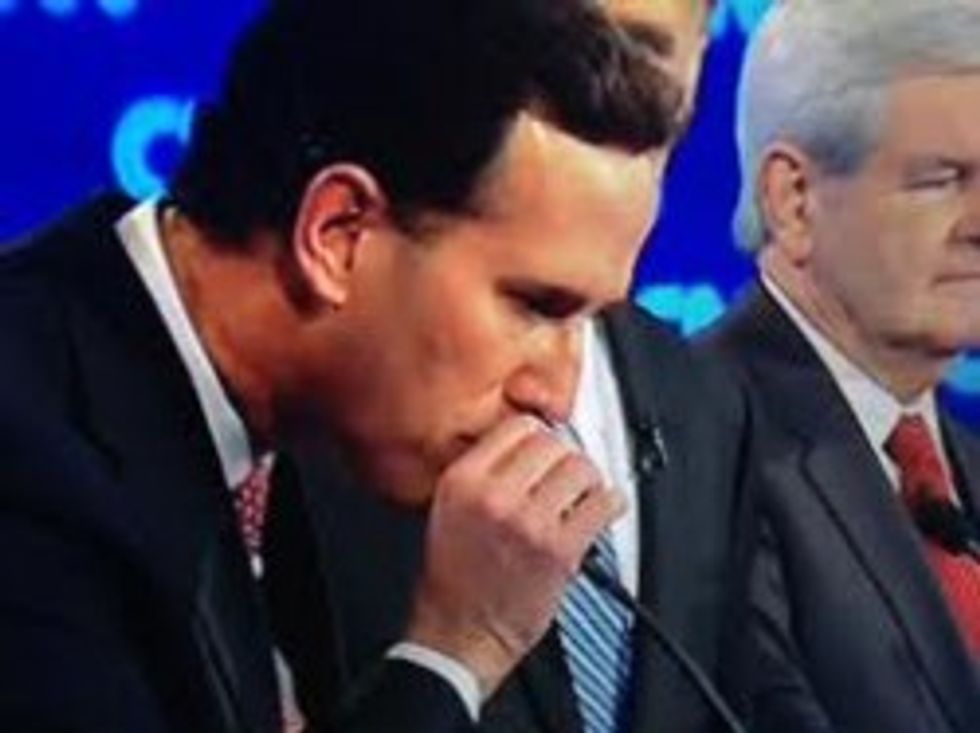 Man you guys, all the former GOP presidential candidates, like Herb Cain and Newt Gingrich and Ol' Smegma Lips over there, are having such a hard time dealing with the cold FACT that they are losers, who lost, because people like themeven less than they like Mitt Romney! Herb Cain is trying to keep himself relevant by throwing protests to which nobody comes (Bargaining); Rick Santorum still will not endorse that bastard Messican Lord Sir Hairgel His Willardness (Anger); and Newt Gingrich thinks he is still actually in the race (De Nile). We have forgotten about Steve Perry and Miranda Beckham, because who are they again? (Also, Ron Paul continues to not actually exist.)

Would you guess that spitty, sneery, smegmified loser Rick Santorum was going to hold a conference call with supporters and be a dick? YOU WOULD! Then you, unlike Rick Santorum, are a winner who wins things. YAY YOU!

Former presidential candidate Rick Santorum on Monday sounded no closer to endorsing Mitt Romney than when he dropped out of the presidential race last week, telling supporters on a conference call that he hasn't even had a chance to speak to his onetime rival.

Santorum said he has talked with former House Speaker Newt Gingrich. "I haven't had a chance yet to talk to Governor Romney, but we'll be talking to both of them and we're going to go out and do what we believe is in the best interest of our country," Santorum said in the call, which had at least 4,000 participants at its peak, according to host and Santorum aide Mark Rodgers.

To crystallize the point that he isn't going to make an endorsement in the immediate future, Santorum told his supporters that it was entirely up to them who to vote for in next week's Pennsylvania primary. "I haven't supported any candidate at this point," he said.

Jesus, what did Mitt Romney ever do to this fucker, bone his wife? (No, he didn't, because his penis is not stiff.) Anyway, Rick Santorum lost and will continue to lose forever and ever amen. [CBS]