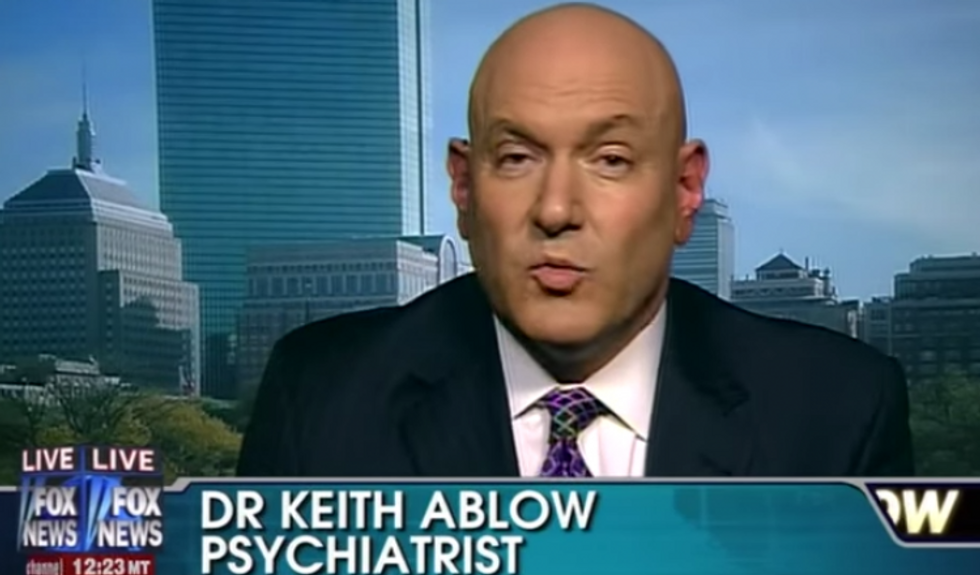 Following Monday's New York Times story about Hillary Clinton's debate preparation strategy, which reportedly includes some "advice from psychology experts to help create a personality profile of Mr. Trump to gauge how he may respond to attacks and deal with a woman as his sole adversary," the crack team at Fox News unchained the cellar where they store "Dr." Keith Ablow, peeled him out of his rubber gimp suit, and asked his professional opinion on Clinton's strategy. On Wednesday's edition of "Fox & Friends," the good doctor explained why it's going to be pretty difficult for Hillary to needle Trump, considering what a perfect specimen of testosterone-fueled mental healthiness this Trump fellow is:

Brian Kilmeade: Yep, the Democratic nominee is consulting psychologists about Trump's biggest insecurities to bait him into making mistakes on the debate stage.

Tucker Carlson: Well, psychiatrist and Fox News Medical A-Team's Dr. Keith Ablow is here to assess this strategy [...] This doesn't sound like a crazy strategy to me, and it's something I think that every presidential candidate does during the debates. You're trying to figure out how to pick at the other guy's weaknesses. Will this work with Trump?

"Dr." Keith Ablow: Well, sure, it's something that every candidate probably does, probably should do. Psychology's a very powerful tool to unearth what does get under people's skin, if you will. But listen, with Donald Trump, kind of what you see is what you get. I have to say, when the small hands issue was raised during the debate, this supposedly got the Clinton campaign very excited. They thought, "Man, he's off his game." He wasn't off his game at all. Freud would have been standing up, like applauding, standing ovation. To be able to address such an intensely personal issue and say, "Listen, there's no problem in that department," to me that showed an incredible degree of psychological strength.

The real question, of course, is whether Dr. Freud, having seen Keith Ablow invoking him on TV this way, might not have simply returned to 19th-Century Vienna and decided to pursue a career in endocrinology. Also, just how tingly was Ablow in his swimsuit area for Trump? As we recall it, the whole "tiny hands" thing mostly just made everyone laugh at both Trump and Rubio, but maybe that's a lot like applause.

Ablow went on to explain that it's pretty difficult to get under Trump's skin, since the man really is nothing more than skin and has no psychology at all:

With Donald Trump, he may err, he may make errors in saying what he thinks, telling us the truth, saying things that are gritty, perhaps attacking with some unkind words, which he could scale back, but you know what, his demons are on his sleeve. There's not a lot of psychoanalysis that hasn't been presented already.

Dag, man, Hillary Clinton's going to have a tough time dealing with Trump, who is completely unflappable and never flies off the handle, while Hillary Clinton is a power addict -- "Imelda Marcos on steroids," in Ablow's expert opinion.

We're now sort of hoping Trump hires Ablow for his debate prep team. This is, after all, the genius who explained that all Newt Gingrich's extramarital bonings secretly demonstrated his moral strength, since he was so virile and attractive to women that they kept throwing themselves at him even though he was already married:

Conclusion: When three women want to sign on for life with a man who is now running for president, I worry more about whether we’ll be clamoring for a third Gingrich term, not whether we’ll want to let him go after one.

NRO: Ladies Should Love Mitt Romney Because Of Gold-Digging, And Having Daughters Made Obama Gay

By this logic, of course, Anthony Weiner should be the mayor of New York City. He could have featured his tweets on campaign posters. The only bizarre thing about that bit of Ablownalysis was that it appeared to infect the National Review's Kevin Williamson, who predicted Mitt Romney's prowess at producing sons would make him irresistible to women voters, too.

We'll venture an alternative hypothesis: Some of these rightwing pundits think far too much about, and with, their dicks.