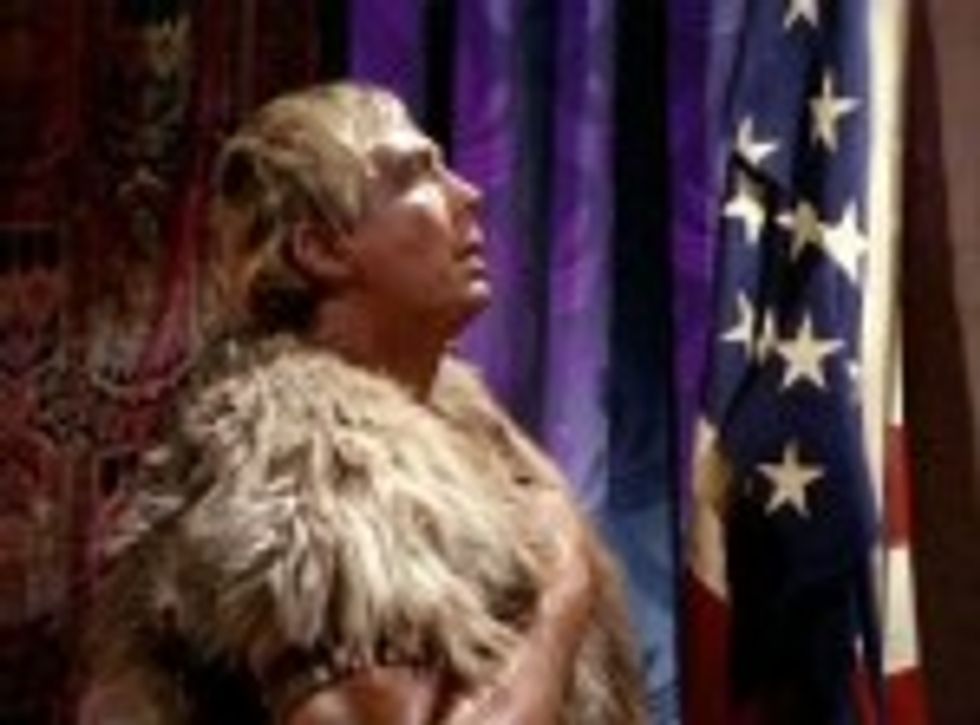 By now, we're pretty much used to Fox News's routine freakouts over how there's a War On Christmas (and by extension, on Jesus and America), but the holiday-weekend hosts of Fox & Friends upped the ante today with a complaint about a beer ad that neglected to give God his due. And here we'd have thought that using God to sell beer would be, you know, a cheapening of religion, but what do we know? At issue is a dopey ad for the tolerable sorta-microbrew Samuel Adams, in which a fake bartender fills a glass with the stuff while saying that it makes sense to name a beer after Samuel Adams because he "signed the Declaration of Independence. He believed there was a better way to live: all men are created equal. They are endowed with certain unalienable rights: life, liberty, and the pursuit of happiness." WELL YOU SEE THE PROBLEM, DON'T YOU?????

OK, maybe you do not see it because you do not spend every moment searching for insults to Baby Jesus, so we will tell you: The actor playing the bartender did not say it right! He left out "endowed by their Creator," and so, Fake Doocey, Fake Kilmeade and Fake Gretchen* all agreed that “the terrorists have won.”

“When political correctness takes over the beer advertising industry, the terrorists have won,” said [Jesse] Watters, who is better known for his job as a producer on Bill O’Reilly’s Fox News show. “I mean, this is absolutely outrageous!”

“You know, maybe it’s because Sam Adams was the tea party guy — he started the Boston Tea Party — maybe the tea party’s being targeted here,” he added.

The Blaze also took great umbrage at the ad, but eventually ran an update with an "alleged explanation" from the brewer, noting that the beer industry's advertising guidelines say that “Beer advertising and marketing materials should not include religion or religious themes.” This only evoked further butthurt from the Fake Friends, who could not believe that anyone would place some stoopid piffling "industry guidelines" over the Sacred Texts Of America's Founding. Clayton Morris was aghast:

Watters jumped in to agree that it's just hypocritical to refuse to use God to sell beer:

“Yeah, you can have a bikini cat fight in the pool with hair pulling and all that nonsense, but don’t put God [in an ad]”

Because if God isn't put on exactly the same level as bikini cat fights, the dignity of this great nation will suffer.

Strangely, the Fox News piece left out a sacred wingnut text as well, since it neglected to have the obligatory fuckseizure over the two or three times that Barack Obama has said "endowed with certain inalienable rights." Thank God the Blaze did, because THIS IS HELLA IMPORTANT FOR AMERCIA:

By the way, you may be wondering why “endowed by their Creator” is such an important phrase. Well, as scholars will tell you, rights granted by God shouldn’t be taken away -- rights given by man can change with the wind.

Shame, Boston Brewing Co., SHAME! You have dishonored the E Plebnista, now go sit in the corner until you learn ALL the Worship Words. Oh, and of course, there is talk of a boycott.

*We aren't sure which one is which, but every time SNL does Fox & Friends, it is HORRIBLY HORRIBLY distracting that they have Kilmeade played as the slavering idiot and Doocey as the "smart" one. And they don't even seem to be doing it ironically or anything.