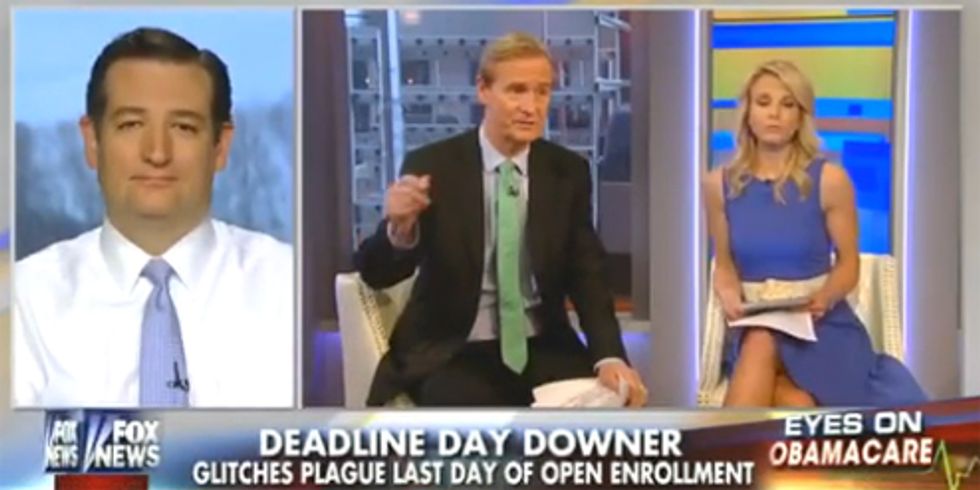 Please ignore the positive numbers, folks -- even though Obamacare enrollmentappears to be around 7 million as of yesterday's (sorta) deadline, Sen. Ted Cruz (R-Tim Horton's) wants everyone to know that all the evidence still proves that "every word" of the ACA has to be repealed, even the stuff that people supposedly "like." But on Fox & Friends this morning, Cruz's prediction that the ACA will definitely be repealed was actually challenged by hosts Steve Doocy and Brian Kilmeade.

“I think at this point it is abundantly clear this thing it isn’t working,” Cruz told the Fox News hosts the morning ... “You can’t fiddle around the edges. I think it is the essence of pragmatism to recognize this thing isn’t working, and let’s start over, let’s repeal every word of it.”

“You know, you’re kind of in a minority when it comes to that,” host Steve Doocy pointed out. “You look at the polling, Senator, and a lot of Americans like parts of it, would like to see parts of it continue. So, to blow the whole thing up, I don’t know if people are behind that.”

Aw, but that can't be true, says Cruz, because everyone hates the law and actually nobody really signed up, don't you see?

Cruz disputed the administration's "funny math" and insisted that the enrollment numbers don't reflect actual paid policies, and besides, most people who enrolled were already insured, and Obamacare just made them switch policies. Happily, the Los Angeles Times has a nifty explainer/debunker on those claims and others -- you may want to bookmark that puppy. On the "sure people signed up, but they were mostly deadbeats" claim -- also advanced by Rick Santorum -- the figures so far show that 85% to 90% of enrollees actually paid their first premium. Similarly, the 'Most already had insurance" claim relies on a misreading of the very McKinsey study that Cruz mentions in the clip below. States that have tracked whether people previously had insurance found that between 60% and 75% of enrollees on the exchanges didn't have insurance, while the McKinsey study included off-exchange insurance purchases that were much more likely to involve people signing up with their existing insurers.