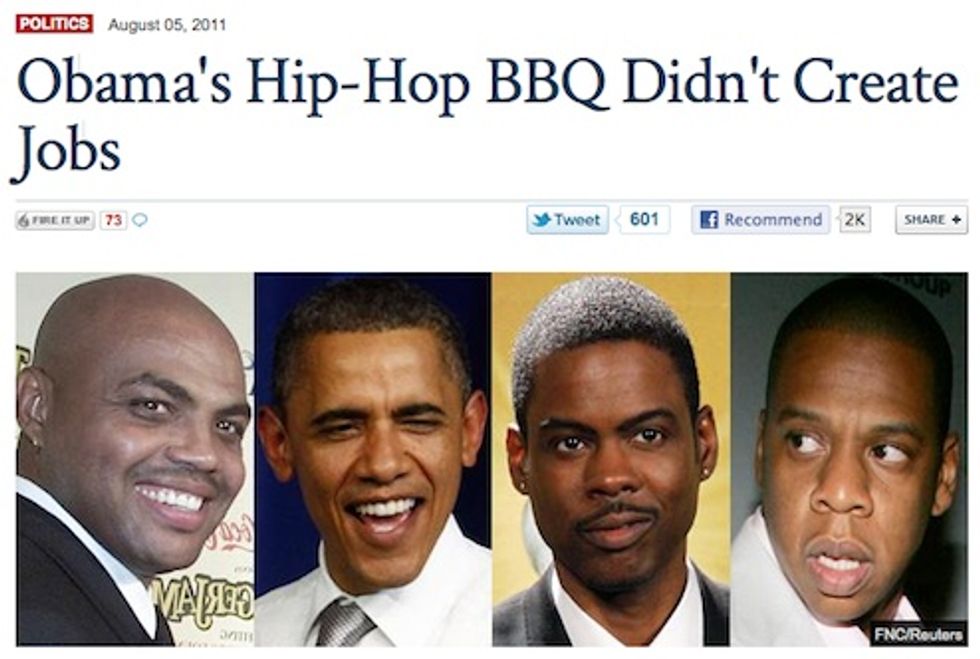 Here is your dumb racist Fox Nation headline screengrab accusing Obama of some kind of secret anti-employment Black Panther birthday celebration, because "hip-hop" is the acceptable derogatory term for "black people things" if you are an old white racistwho reads Fox Nation. Why didn't this barbecue party create jobs? Why is Obama always inviting black people to his parties? Why can't Obama party with some employed people sometimes? Maybe they would accidentally create some jobs while Obama parties?

For the cruelly illiterate white readers of the Fox Nation blog, the headline writers also throw them another clue: the URL handle reads http://nation.foxnews.com/president-obama/2011/08/05/obama-parties-chris-rock-jay-z-and-whoopi-while-rome-burns. Got that? There were black people at a party and there are no jobs in America, which is Rome, and it is burning to the ground. Did Fox News just admit that America is actually terrible? EVERYTHING IS WRONG WITH THIS PICTURE.

Oh right, black people are not allowed to have money or party unless the white people in the country get their party and money first. It's like this Negro President of ours STILL cannot remember the rules. [Fox Nation]