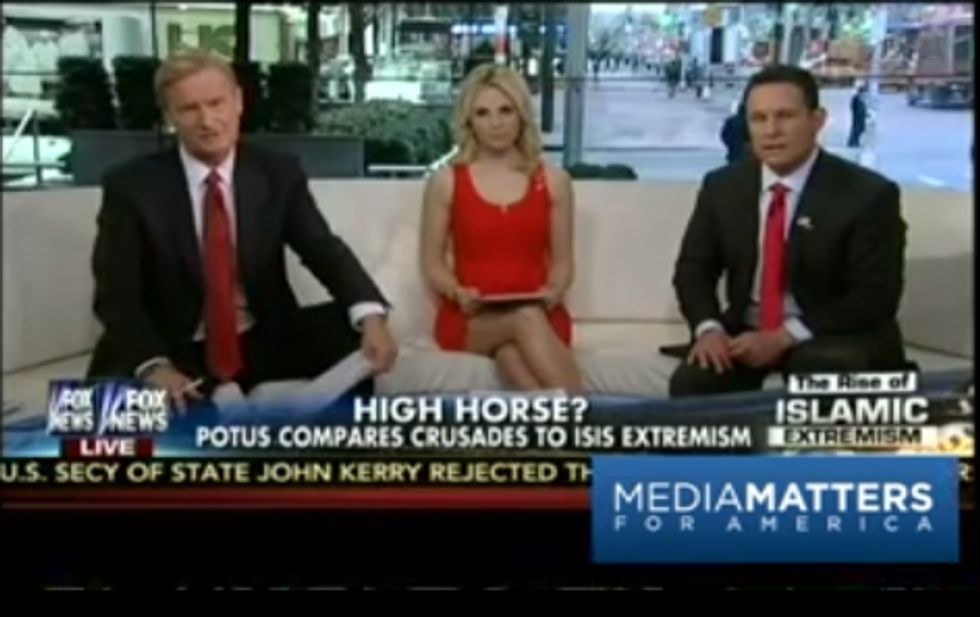 President Obama said words again, as he is so uppity-ly wont to do, so of course the dimwitted mouth-breathers on Fox & Friends are OUTRAGED!!!! Damn you, Obama, with your word-saying.

This time, he was word-saying words at the National Prayer Breakfast, where the president is supposed to say a bunch of platitudes about the First Amendment and Jesus and God Bless America, and somehow none of that is at all contradictory, no sir.

The president, however, went off script by not just saying "praise the lord," but also talking about some terrorism, which he refuses to call radical Islamic terrorism because of how he is a secret Kenyan Islamic Terrorist Teleprompter-reading BLACK PRESIDENT IN THE WHITE HOUSE OMG:

Well, fine, that might be fair and historically accurate. But like that matters! Here's Steve Doocy, utterly incredulous that Obama would say historically accurate things about the the yes-this-really-did-happen violent history of Good Christians torturing and killing people, for Jesus:

While Jordan is seeking revenge on the terrorists, our president was at the National Prayer Breakfast, which happens every year in Washington DC. And essentially what he did was he said, “You know what? Yeah, ISIS is bad. But you know what? Christians were just as bad as ISIS was a couple of centuries ago." Not making it up.

Yeah, except for how Doocy is totally making that up, because that's not what Obama said at all, at least not in the clip Doocy instructs us to watch. But what the heck, let's play along and pretend that those were the president's exact words, and he did literally verbatim say that Christians were just as bad as ISIS when they crusaded all over the globe killing people in the name of Christ. Yeah? And? That would be wrong to say because ... why?

Here, maybe Brian Kilmeade, the show's brunette (for diversity!), can explain to us what A Idiot the president is for that word-saying he word-said:

The Crusades happened all those years ago, but we’re talking about -- the president felt it was necessary to go back to the year 1095 and talk about 200 years of the Crusades to get some relevance for today. He’s making excuses, it seems, for ISIS’s behavior, essentially saying, “We started it.” That is so unfathomable!

Obviously, Brian did not watch the clip of the president speaking that his co-host Steve told us to watch just a minute ago, or maybe he is not aware that Jim Crow occurred after the year 1095. Or maybe he is just a total and complete moron. Nah, unfathomable!

Helpfully, Steve Doocy jumps in to clarify that Obama means "we Christians" started it, because America is a Christian nation, since the year 1095, anyway. No, we are not even going to waste our pixels explaining how some of us who are not Christians and yet somehow are Americans (weird!) get a little nervous in our "Yeah, we have heard of the Crusades and the Inquisition and the War on People Who Don't Say Merry Xmas" bones when we hear that kind of talk.

Then Elisabeth chimes in to explain, "Christians have nothing to do with that video we saw on Wednesday of that Jordanian pilot being burned alive to the point where his jaw fell off."

So take that, Obama, with your "context" and your "history" and your "mentioning things that have happened." No Christian has ever done a bad thing in the name of Christ for, like, a thousand years -- except for all the stuff that's been done since then, but they had it comin', what with their being Not Christian or Working At An Abortion Clinic or Being A Witch According To Some YouTube Videos.

In conclusion, Christians are awesome and have been in every way for the last thousand years at least SHUT UP YES THEY HAVE, Obama sucks again some more forever, and it's just another day that ends in "y" at good ol' Fox "News."