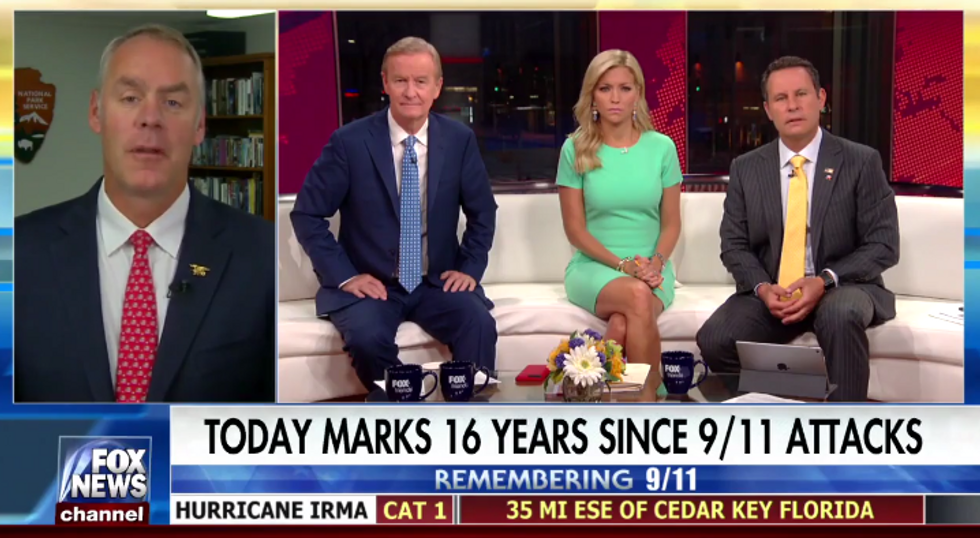 It's 9/11, according to calendars, which means it's the 16th anniversary of that terrible day in 2001. Donald Trump spoke at a memorial event and somehow managed not to brag about how the falling of the towers made his own building the biggest, and he didn't tell lies about New Jersey Muslims celebrating in the streets either. Instead, he just blabbered his way through moments of silence, you know, like presidents always do.

Over yonder in the syphilitic brain stew of "Fox & Friends," they are #NeverForgetting and #JustAskingQuestions about 9/11. Specifically, Brian Kilmeade, the one we always called "The Rapey One" because he looks kinda rapey, until it turned out he's one of the only Fox News men who hasn't been accused of bad-touching all over Fox News women, had a question about 9/11 monuments that's almost as dumb as the questions he had about why sharks rudely insist on living in the ocean on a regular basis.

He posed his important question about the Flight 93 memorial in Pennsylvania to Interior Secretary Ryan Zinke:

Fox & Friends seriously just compared a 9/11 memorial to Confederate statues, asking if we'll be tearing down 9/11 memorials in 100 years: pic.twitter.com/Y5Xg1dsB0d

“Do you worry 100 years from now someone is going to take that memorial down like they are trying remake our memorials today?”

Does he ... does he think the abiding belief system of liberals is that we just fucking haaaaaaaate statues?

Is there possibly anything to differentiate between Confederate traitor slaver losers like Robert E. Lee and Stonewall Jackson and the victims who died on 9/11? Anything at all?

Zinke gracefully didn't noticeably react to how the "Fox & Friends" host whose face looks like he's perpetually pinching loaves off in his panties had just asked him the world's stupidest question, and said some platitudes about learning from our history, then tried to steer the conversation back in a semi-normal direction.

He added that none of our statues or monuments will ever be perfect, because "we don't put up statues of Jesus." It's Mohammad that we don't put up statues of, not Jesus, but OK. As The Daily Beast points out, there's a big Jesus statue on federal lands in Montana, where Zinke is "from." And then there's Touchdown Jesus in Ohio. And Christ of the Ozarks in Arkansas. BUT OTHERWISE, whatever, we did not come to this party to pants Ryan Zinke. (This time.)

For the record, from the moment Brian Kilmeade asked his question until the segment was over, he kept his "fucking magnets, how do THEY work?" look plastered on his face, because that is just what his face looks like, which is sad :(