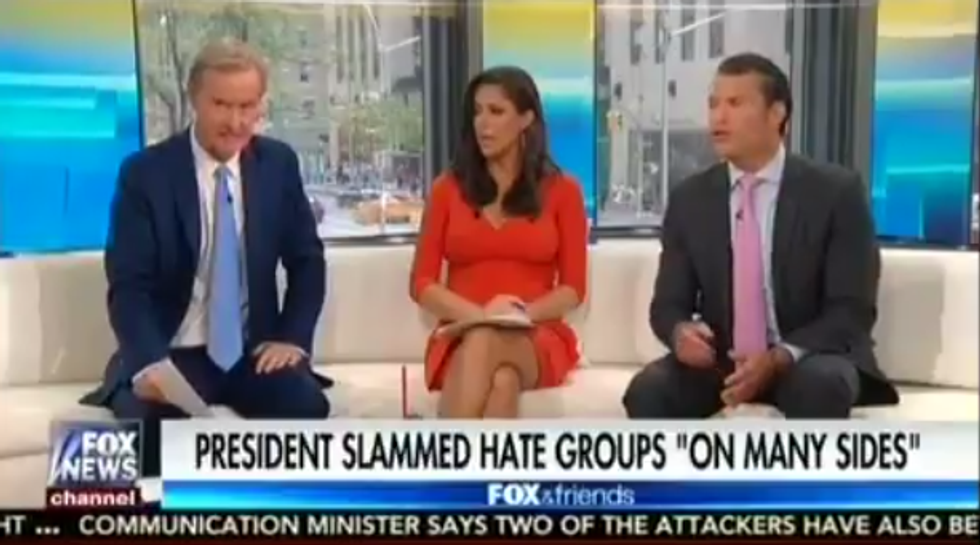 Donald Trump is the victim in all this.

Minutes ago, Donald Trump finally made a new statement about Charlottesville. It must have just killed him, but he choked out these words:

“Racism is evil,” Trump said in a statement from the White House. “And those who cause violence in its name are criminals and thugs, including the KKK, neo-Nazis, white supremacists and other hate groups that are repugnant to everything we hold dear as Americans.”

Well that's just ... well it's better than his first statement, that's for sure. Steve Bannon must be losing it right now.

GOP senators have been racing to their Twitter accounts to see who can boldly go where Republicans seldom go, by stating succinctly that Nazis are bad, and Vice President Mike Pence even reluctantly admitted that "white supremacists" and "neo-Nazis" are to blame for the Charlottesville violence, but only when a reporter twisted his nipples and forced him to abandon his rhetoric about how "many sides" do it (but mostly the media).

Meanwhile, the Fox News kids have been Just Asking Questions that NO FUCKING SANE PERSON IS ASKING, about how it's really the media's fault, and the blacks, and so forth:

Oh golly, we don't know! Should it NOT bother us that Donald Trump, the president who dogwhistled his way into office riding the coattails of literally deplorable racist Americans, and whose White House statement on Holocaust Remembrance Day somehow failed to mention JEWS, had a really fucking hard time saying that literal NAZI WHITE SUPREMACISTS did this? Because Trump sure doesn't have a hard time naming names when something is really bothering him, whether that name is Hillary Clinton or Chuck Schumer or Fake News CNN or the Failing New York Times or the gold star Khan family or Mika Brzezinski's bloody face or Megyn Kelly's bloody wherevers or or or OR OR OR OR OR! That it took him until now to muster up a simple, "Nazis are bad mmkay?" is just a little bit weird and disturbing. Unless we're just being HYSTERICAL, like we always are.

Because we hate ourselves, let's click on the video Fox's Howard Kurtz posted and see what ... Oh Jesus ...

KURTZ: By making Donald Trump the focus of this protest that turned utterly violent, a protest he had nothing to do with, aren't some critics in the media also being divisive?

Poor Trump, being unfairly maligned by the evil liberal media!

Pundit Jessica Tarlov reminded Kurtz that this is NOT the same as wingnut complaints about how Barack Obama wouldn't use the magic words "Radical Islamic Terrorism," because while there are millions of moderate and nice and happy Muslims, there is no such thing as "moderate neo-Nazis," therefore SHUT UP, HOWIE KURTZ.

Kurtz allowed that yes, it would have been better if Trump could have coughed out the words "white nationalists" at the outset, then added "BUT BUT BUT BARACK OBAMA RADICAL 'SLAMIC TERRORISM," because he apparently wasn't paying attention seconds before, when Tarlov explained how this thing is different from that thing. Wingnut pundit Mollie Hemingway chimed in to say Trump's original statement was very nice and loving, and then she listed a bunch of cities where there were also violent (black) rallies committed by the "fringe left" (black ones), just so Fox News viewers would understand that (black) hate is a problem on all sides (mostly the black sides though).

Well this is fun. Let's look at another nice moment from Fox News, and no, we're not talking about when Fox reporter Doug McElway was broadcasting live from the middle of the action and a Nazi yelled, "The fucking Jew lovers are gassing us, man!" and McElway's only response to that was, "Pardon his French."

Instead, we'll visit the idiot couch on "Fox & Friends"!

Fox & Friends finds the real villain of Charlottesville -- the press, which just wants to "run with their narrative" pic.twitter.com/epXks9r3WQ

GUY IN BRIAN KILMEADE'S SEAT WHO ISN'T BRIAN KILMEADE: Look for the press to keep PRESSING HIM no matter what, right? Because in their mind, nothing is ever good enough ...

STEVE DOOCY: That's what they'll do!

NOT KILMEADE: ... so they'll keep pushing him.

LADY: Well that'll be the first question, no doubt, Steve, out of the gate, at this press conference ... but as you said, Pete, they have, it seems, like an open door to run with their narrative [...] In their minds, a lot of them, they say we can associate the president with these groups, and that fits a lot of the narrative on the left, a lot of the media, and that is very problematic for society for us to even be talking like that!

OH HIS NAME IS PETE: Of course, because so much of the Left sees this world not through America First, but through racial identity politics first.

America First? Oh, hey, psst, Pete, if we may call you that, since apparently it is your name: You're accidentally using Nazi codewords while talking about how the media is having a "narrative" that President Trump is a Nazi, whoops, oh well.

Meanwhile, it's very problematic how the media drove its leftist racial identity politics narrative right into a crowd of people in Charlottesville, Virginia, this weekend, killing one and injuring many others. When will the liberals stop being THE REAL NAZIS all the time?

OK, that's enough Fox News. Let's all just be grateful how Donald Trump solved racism this afternoon, with his day-late, dollar-short statement, which was the literal least he could do.