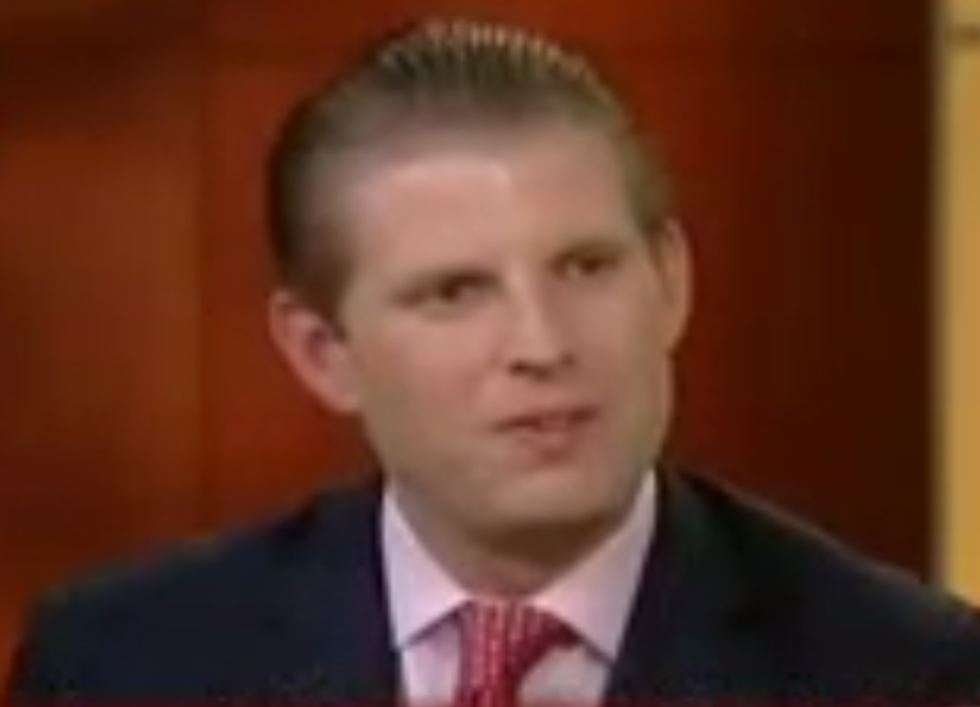 On the fateful day a bunch of Britons went to the polls and Made Britain Great Again, by voting for the "Brexit," something many of them did not even understand, Donald J. Trump was in Scotland, obviously for the opening of a Trump golf course. Trump supported Brexit, except for when he was blaming it on Obama, and if you don't understand how one can believe both of those things, you obviously do not have a Very Good Brain like Donald Trump.

(Oh, also while in Scotland, Trump tweeted how excited he was for all the Scots celebrating the Brexit vote. Scotland actually voted "remain," and Scottish Twitter responded to Trump with the most delicious insults imaginable.)

[wonkbar]<a href="http://wonkette.com/599807/psa-please-do-not-poison-donald-trumps-creepy-looking-son-with-lemonade"></a>[/wonkbar]Well! Trump's son Eric, the one what got fake terroristed with lemonade and has the weird face, was displeased with all the nasty media attention his daddy got in Scotland. Can you believe people were like, "What A Idiot"? Can you believe people thought it was kinda funny that the man who is running to be leader of the free world was spouting off bullshit about an issue he didn't understand, on a golf course in Scotland? Eric complained about ALL THE THINGS to the human wedgies on "Fox & Friends":

ERIC TRUMP: [Obama] said that, effectively, the UK is going to get in the back of the line if the vote goes though ...

STEVE DOOCY: Back of the queue, was the word he used!

He did say that! Not because he's being mean to those poor Britishes, but because it makes them a much smaller trading partner. It wasn't complicated. Moving on, so we can discuss why Obama and Hillary are the evil establishment, and Trump and those xenophobic morons who voted for the Brexit are the actual smart guys:

DOOCY: [P]eople are sick and tired of the establishment taking away people's freedoms. Over there, over here.

TRUMP: My father called it right. ... [I]f you look at sentiment of that country, it's very much the same as the sentiment of the U.S. right now. They want borders. They want security. They want jobs. Right? I mean they want to be safe. I mean these are the same things that are happening in the United States right now. And the fact that our leaders ... are missing these cues from the people, with our greatest allies, is astonishing.

DOOCY: And see, that's the message that the establishment -- you know, people are sick and tired of being bossed around by faceless bureaucrats in Washington, D.C. And yet the mainstream media spun this.

KILMEADE: [H]ow unbelievable is it that the Democrat would talk about golf when the president has golfed more than anybody in 400 years?

TRUMP: Yeah. ... The president -- I mean every single major tragedy that we've had as a nation, during his administration, do you know where he's been? He's been on a golf course. You know, it is ironic, Brian.

BARACK OBAMA, THE GOLFING-EST MAN OF THE WHOLE UNIVERSE DATING BACK TO 1616!

Quick factcheck for the men on the Fox news program with the rapey faces and the intermittently firing brain synapses: Obama has taken fewer vacation days in office than any president since Jimmy Carter, whereas the president before him -- George W. Bush, #presidentfact -- took a wholeEIGHT-HUNDRED SEVENTY-NINE days off. Now, you might say, he was doing important presidenting while he was clearing brush on his Texas ranch. And we bet he got some briefings and personally did "pew pew!" finger-guns whenever he ordered a new round of bombing in Iraq and Afghanistan.

But specifically as it pertains to golf, well ...

The point is that the whole idea of calling Obama the "vacationer-in-chief" and saying, as Little Eric did, that Obama has been on the golf course during "every single major tragedy that we've had," is a steaming huge pile of bullshit, and should not be dignified with a response, even though we just wrote a Wonkette post about it.