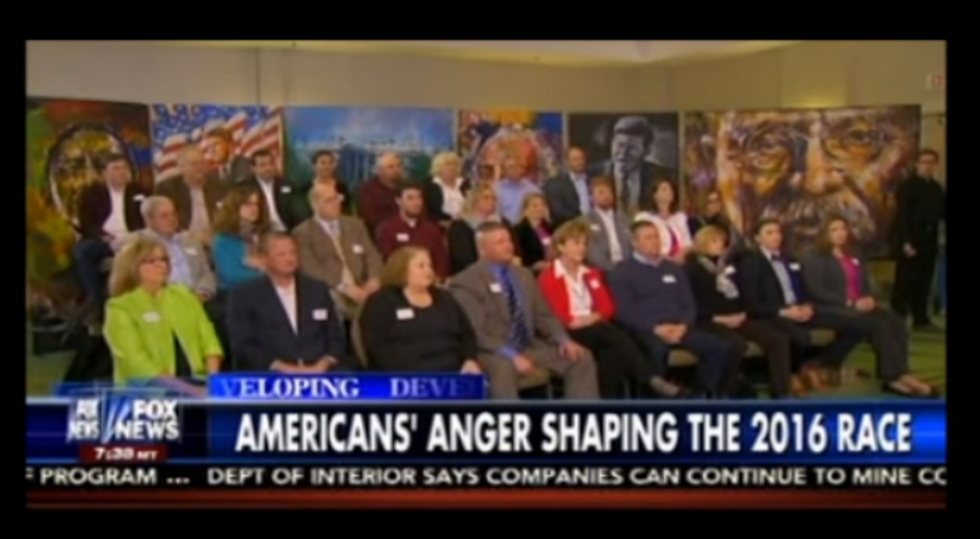 You probably forgot about Sausage Golem Frank Luntz and his long, storied career of making shit up for GOP candidates after he wandered off into the wilderness wearing nothing but jorts and reeking of day-old pepperoni back in 2014. Fox News didn't forget about him, though; after Luntz's Vision Quest, the network hired him as an analyst. Part of his job for the Legion of Sociopaths has been conducting in-house "focus groups," aka "a bunch of angry white people Fox found to scare their median-age-82 viewing audience into thinking the gays and blacks are coming to take their Jesus gun freedoms."

Via Crooks and Liars, one of Luntz's most recent polls was conducted in the we-can't-even-pretend-it's-great state of South Carolina, where the third Republican primary happens every election cycle after we stop the charade of giving even a semblance of a damn about the opinions of people in Iowa and New Hampshire. Luntz's "focus group" turned out to have some incredibly terrible views about ... well, pretty much everything. The real meat of the exchange, though, happened when the focus group members began dog whistling so hard, a nearby veterinary hospital exploded:

“What bothers me the most in this country is that you can’t even speak the truth any more or else you’ll be called a racist or a bigot or any other thing.”...There was significant applause.

Hey, guess what, Random South Carolina Man #2, if that even is your real name: If your opinions on black people involve the n-word (and frequently even if they don't), congratulations! You are, in fact, a racist! Huzzah for you! Except not, because that is horrible and you are horrible.

Ohh, but the group wasn't even close to done:

“Because I have a right to my opinion without being labeled something. I mean, it’s ridiculous,” she said.

Somebody else called it “reverse discrimination.”

Then there was this unfortunate or perhaps telling phrasing by a woman: “Anyone who says anything has to watch everything they say and you can’t label a spade a spade. Everyone is afraid to talk,” she said.

Oof, double oof, and triple oof. It's like they were going for Shitty White People Bingo ("rants about political correctness run amok" is definitely the center square there). Let's make this as clear as possible: if you're afraid to say things because most other people might think they're racist...they're probably racist.

One lady, though, managed to hit the issue on the head harder than anyone present:

Dear white people: please stop raging at the first flickers of the dying of the light of our collective supremacy over all facets of American life. I promise it's going to be fine. No one is going to sell you into white slavery. Also, Frank Luntz is a turdgoblin.

This has been a public service announcement from yr Wonkette.