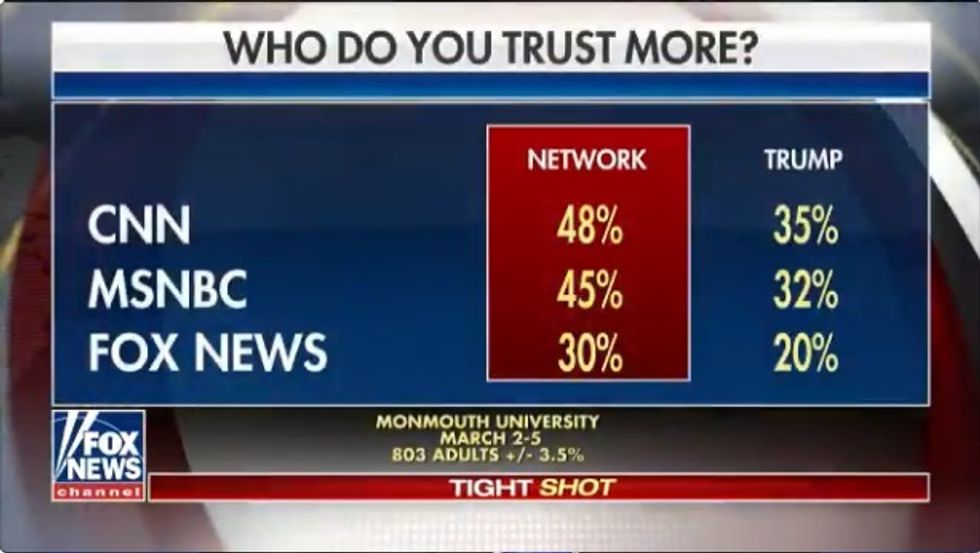 Many Americans do not have maps and such as

Fox News had another little graphics slip-up yesterday. This time it wasn't mislabeling a Republican in a scandal with a "D" after their name, or putting up a map of the Middle East that got all the countries in the wrong place. Instead, it was a graphic with some pretty embarrassing poll results for Fox, showing the network was less trusted than CNN or MSNBC. Whoopsies! The boner (it's a perfectly fine slang term for mistake, stop tittering!) occurred while "Media Buzz" host Howard Kurtz was interviewing sad Republican pollster Frank Luntz about how Donald Trump's tweets weren't doing Trump's agenda any good. Then it was time for a discussion of how people think there's a whole lot of Fake News out there:

.@FrankLuntz: "It's [@POTUS's] own tweets that are causing so much of the trouble... He should be focused on the economy and on taxes." #MediaBuzzpic.twitter.com/hbjdU6G7gz

Frank Luntz has had it with all this electoral 'poison.'

As Kurtz said, "Speaking of fake news, there is a new poll out from Monmouth University. ‘Do the media report fake news regularly or occasionally?’ 77 percent say yes," A helpful graphic came onscreen. It wasn't the graphic Kurtz wanted; instead, it displayed the results of another question from that Monmouth poll altogether, comparing the percentages of people who said they trusted cable news sources to those who said they trusted Trump more:

Mistah Kurtz, he pissed: "That is not the graphic we are looking for. Hold off [...] Take that down, please." a Responsible Party in the control room quickly complied and put up the appropriate slide.

What we find a bit incredible -- and which ShareBlue and the AP both missed the chance to mock Fox for even more -- is that Kurtz actually did intend to use that graphic at all, a moment later, when he made the point that more people believe cable news than they believe Trump's tweets, although in the case of Fox, there was far less of a difference: 30 percent trust Fox more than TrumpenTweeten, 20 percent trust Trump over Fox, and 37 percent "trust both equally."

But to make that point, Kurtz still had to show the graphic that clearly said his own network was trusted least of all. Have to question the wisdom of that, really, unless maybe it was meant to reassure Fox viewers that the majority of Americans are sheep who believe -- snicker! -- what they see on CNN.

ShareBlue also notes that in November, Trump tweeted last November that there should be a

contest as to which of the Networks, plus CNN and not including Fox, is the most dishonest, corrupt and/or distorted in its political coverage of your favorite President (me). They are all bad. Winner to receive the FAKE NEWS TROPHY!

Trump's favorite polling company, Rasmussen, followed up on the challenge, but didn't follow Trump's instructions to not include Fox. Which was too bad for Trump, since the resulting poll found Fox News the fakiest faker of all (40 percent) with CNN in second place with 20 percent. (The other networks, including MSNBC, were picked by fewer than 10 percent as the fakest of the fake.)

In other news, Fox sucks, the end.