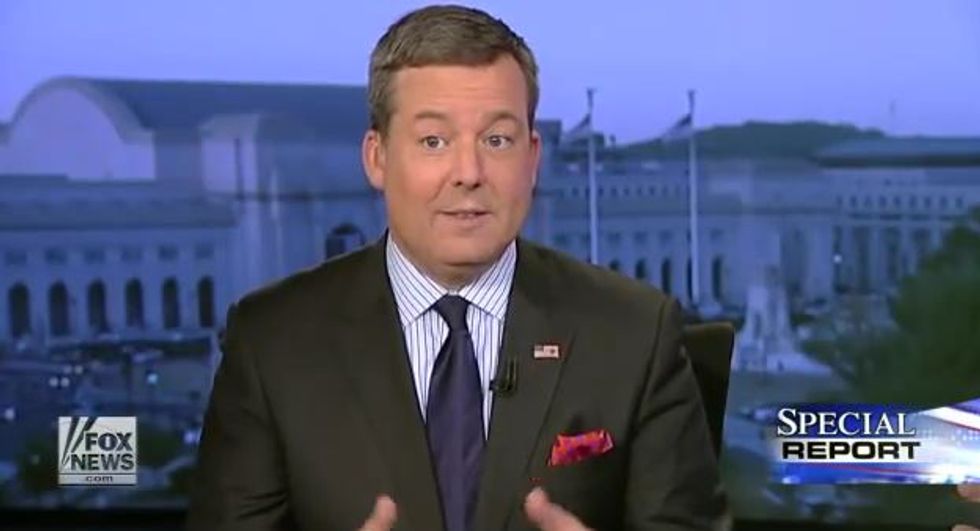 In your WTF, Really? News today, a blessed distraction from the agita over Donald Trump's Ascension to the GOP nomination: Fox News White House correspondent Ed Henry has been bounced off the air for an indeterminate time, because he did extramarital sexxytimes with some lady who is not his wife. Yes, America, we're now suspending Teevee reporters for behaving like common politicians. Or human beings, who tend to fuck a lot, not always with their spouses. Says the Politico:

“We recently became aware of Ed’s personal issues and he’s taking some time off to work things out,” a Fox News spokesperson told POLITICO in a statement.

OK, well sure, that's a storied career placed at risk by doing sex (the affair gets entirely too much reporting at In Touch -- on newsstands now!). But let's also not forget that Ed Henry once wrote the worst article in American history and then went on to ask the dumbest question in American history, so it seems awfully dismissive to simply say he's been the chief White House correspondent for two cable news networks. Also, while hardly as great an achievement, Henry also pulled off a notable bit of news-burial when he spent a mere 30 seconds on air misrepresenting the findings of the House Intelligence Committee's 2014 Benghazi report, which debunked any number of moronic Fox talking points about Benghazi.

So, what exactly is the nature of the journalistic offense that would merit taking Ed Henry off the air? According to In Touch -- print edition available right below the gum and mints at your local grocery checkout! -- he had a "10-month affair with Las Vegas hostess Natalia Lima," even though he is married to NPR's Washington editor, Shirley Hung. Frankly, we would like to know more about how a Fox News reporter ends up being married to an NPR editor, but we're weird that way. Still, it sounds pretty steamy, what with images of their sexy text messages, "photos of their secret rendezvous," and "all the details inside their secret affair."

Wow -- they got photos of a love nest! Get ready for some titillating pics of a hotel exterior!

“Whenever he was in town, we would pretty much just have sex. He has a really high sex drive,” Natalia reveals in an exclusive interview, explaining that she met the 44-year-old broadcaster, who’s been crisscrossing the country covering the U.S. presidential campaign, five years ago through social media and they turned their friendship into a sexual relationship in the spring of 2015.

Dear jesus aitch mother-loving Alfred Kinsey on a pogo stick, that is some hot stuff, and decidedly unprecedented. Let's just get everyone a copy of every Dan Savage column ever written, and accept that affairs happen. Or fine, get divorced, pay your damn child support, give half your moneys to Shirley Hung, and let her find a nice new boyfriend from This American Life. And why are we even talking about this dumb affair anyway? Also, is "Las Vegas hostess" a euphemism for hoor, or did Natalia Lima actually just show people to their tables at a restaurant?

Yr Wonkette will cover this story closely; we're also looking into some very salacious rumors that a recording engineer for CNN may have fudged his taxes this year.