Fox News Has Thoughts On Obama's 'Leeches' Speech. They Are Bad Thoughts! 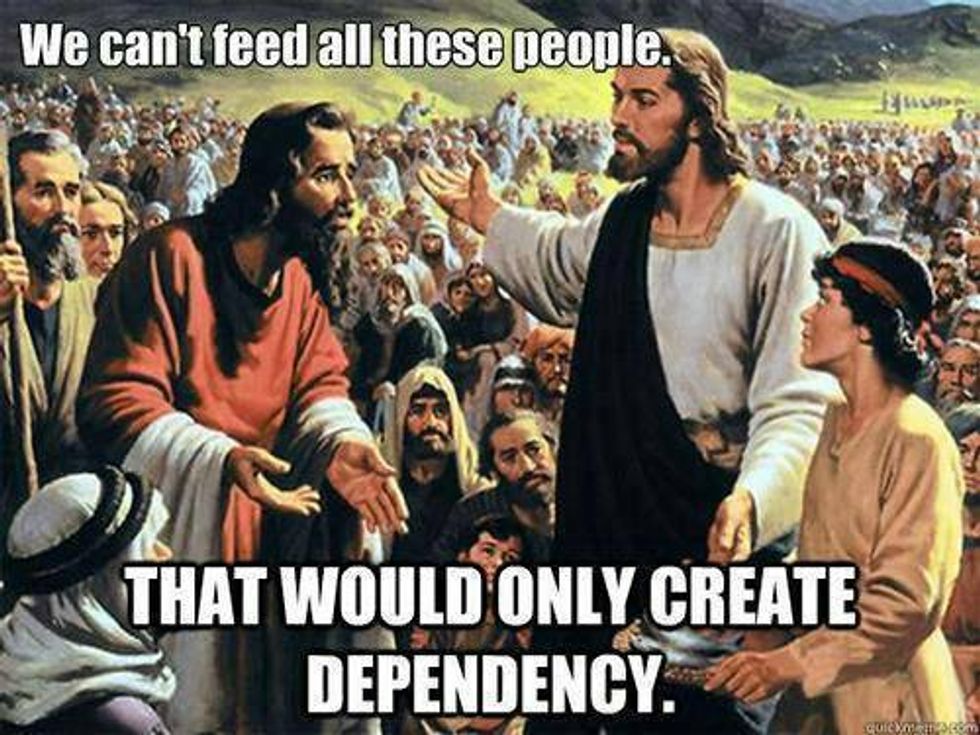 Oh, there goes Barack Obama again, beating up on the crusading journalists of Fox News for having the guts to selectively depict poor people as terrible leeches. At a Georgetown University event Tuesday, Obama said media narratives have presented a skewed image of poor people, because outrage sells:

I think the effort to suggest that the poor are sponges, leeches, don’t want to work, are lazy, are undeserving, got traction. And, look, it's still being propagated.

I mean, I have to say that if you watch Fox News on a regular basis, it is a constant menu -- they will find folks who make me mad. I don’t know where they find them. They’re all like, "I don’t want to work, I just want a free Obama phone" -- or whatever. And that becomes an entire narrative, right? That gets worked up. And very rarely do you hear an interview of a waitress -- which is much more typical -- who’s raising a couple of kids and is doing everything right but still can’t pay the bills.

Well, sure, but how are you going to make people mad at the poors if you don't find the most outrageous, atypical poors and then say they're the norm? Barack Obama would make a terrible cable news producer -- he clearly knows nothing about what Fox viewers want to see.

The President went on to say that these media narratives have made it nearly impossible to actually do anything about poverty, because why would anyone want to help a bunch of lazy leeches?

Aha, so obviously Barack Obama wants to repeal the First Amendment and force Fox News to do his bidding! Not surprisingly, Fox was not about to take these slurs sitting down, or if it was, it was going to make sure that a leggy blonde was sitting in the center of the frame. So on Wednesday morning, Fox & Friends invited Fox's poor-basher in chief, evil crumpet-munching lackwit Stuart Varney, to defend the network. Fox News has nothing against the poor, said Varney; rather, it's just asking questions about why Obama has made so many of them:

Obviously, said Varney, the real problem isn't that Fox has misrepresented poor people; rather, Barack Obama is just trying to distract America from his complete failure to eliminate poverty by cutting taxes enough on the rich, or however it is you eliminate poverty. Fox is simply asking questions that make Obama uncomfortable, like why it is that after "six years of so-called 'recovery,'" there are still people on food stamps? Also, asked Varney, "Why is it that we're giving away 13 million Obamaphones after six years of 'recovery'?" (No, do not bother with the minor detail that Obama didn't invent the program and that it's not paid for by taxes). Then there's the Earned Income Tax Credit, which Varney suggests pays people to be poor. Never mind that Saint Ronald Reagan himself considered the EITC a terrific anti-poverty measure; Varney wants to know why on earth we're still paying for a "program that distributes millions of checks every year as a tax refund to people who've never paid a dime of tax in their lives. Why are we doing this?" As everybody has pointed out forever, even poors who get the EITC do pay tons of other taxes, but why would that matter? They're just lazy moochers who don't contribute a dime in taxes, and Obama has made more of them, but no, Varney isn't criticizing the poor, just the programs that subsidize their lavish, refrigerator-having lifestyles.

Clearly, Barack Obama is hiding his terrible economic record by going after a poor oppressed cable network that is simply telling the truth, which is that the economy is still in the dumps and will get worse because Obama keeps throwing money at poors that we can't afford! Besides, there is a very simple solution to poverty, according to host Steve Doocy:

If you don't want to be poor, usually, you wind up with a job. That is the answer.

So the real problem is that the economy is just barely sputtering along, but poor people could all stop being poor if they'd get off their asses and grab one of the abundant jobs out there. Got it.

Still, Doocy may have a point -- jobs must be ridiculously easy to get and keep, since a walking pile of stupid like Steve Doocy has one.