Fox News Idiot Heather Nauert Gets To Be Boss Of Three Bureaus At State Department, Yay! 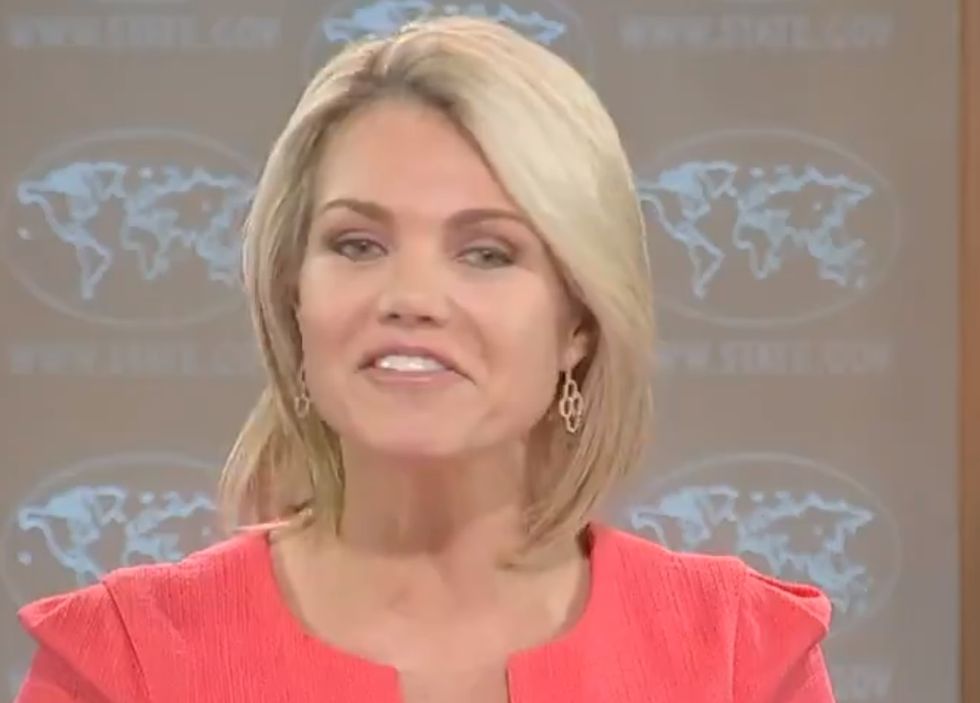 So much news about how Donald Trump is taking a second stab at Making America Great Again, by draining all the swamp losers he originally chose, and replacing them with people who didn't even make the first round draft picks! As we all know, Rex Tillerson is out at State, because he thinks Trump is a fucking moron and said some naughty things about Russia being bad. While those may have been the two greatest moments of his tenure, Trump is DISPLEASED. So now our secretary of State nominee is current CIA director Mike Pompeo, who we must remind you is a gigantic piece of shit and a total Trump toady. Sure, Pompeo might occasionally say something like "Of course" Russia meddled in the 2016 election. But, in order to soften the blow for his thin-skinned boss, he adds, "And the one before that, and the one before that,” as if it’s just “Oh, those silly Russians! OLD FAKE NEWS!"

Pompeo's actions regarding the Russia issue have been questionable for over a year now, especially during the early days of the Trump administration, when Pompeo, AFTER then-acting Attorney General Sally Yates marched into the White House and pulled the fire alarm over how then-National Security Advisor Michael Flynn was a literal actual foreign agent, was all too happy to keep giving Flynn our deepest, sexxxiest national secrets in the daily intelligence briefing. Weird, right?

Pompeo has also been in the room (the "Oval Office" room) when Trump has likely committed obstruction of justice, weighing on his intelligence chiefs to pressure the FBI to cut back on its little Russia Investigatin' habit. We don't know if special counsel Robert Mueller talked to him about little stuff like that when they chatted, but we bet senators will have some tough questions for him about it in his upcoming confirmation hearings.

But this post isn't about Mike Pompeo, that pompous sack of squirrel pubes. It is about Heather Nauert, former Fox News idiot and current State Department spokes-idiot, who has gotten a BIG PROMOTION in the wake of #Rexit. On Tuesday, Steve Goldstein, the undersecretary for public diplomacy and public affairs, was also fired, after he called the White House a liar and said actually Tillerson learned Trump had fired him by reading Trump's Twitter, because Trump is a fucking pig.

AND GUESS WHO GETS THAT JOB NOW, at least in an acting capacity, which means she appears to have 210 days to fuck shit up, or however long it takes to get a new person confirmed once they're nominated?

This is the person who said we don't need to implement the sanctions Congress passed by a margin of one million to some Russian lady named Ekaterina, because the congressional vote probably was enough to scare the Russians into acting right all by itself. One time, in response to a question about what the Trump administration was doing to fix the Syrian civil war, she said, "I don't know what some of you expect us to do." Really.